Odesa Smoking Gun Leads Directly to Moscow"US guilty of genocide": Kremlin supports anti-Maidan festival with links to the German far rightOdesa 2 May Suspect: We were financed by MoscowVital Probe of Odesa May 2 Tragedy stymied because of questions answered?Movement at last on Odesa 2 May investigationRussia Today, or why Odesa May 2 is different from BaltimoreOdesa May 2 Investigation: A Failed Test for Ukrainian JusticeMore Evidence against Incendiary Lies about Odesa 2 MayContinuing Obstruction of Odessa May 2 InvestigationPropaganda that KillsOdessa May 2 trial turns into farce as Russia continues ‘massacre’ propagandaBad Start to Crucial Odessa May 2 TrialsRussia’s New Odessa FileOdesa "Massacre" Propaganda vs. the FactsDangerous silence over police role in Odessa May 2 eventsWithout Double StandardsWhat Russian TV won’t show about the events in OdessaCVU: Pro-Russian activists sold information about pro-Ukrainian activists in OdessaUHHRU condemns police role in Odessa tragedyInvaders stage fake referendum so they can accuse Ukraine of ‘invading Russia’
• Topics / Terrorism
• Topics / News from the CIS countries 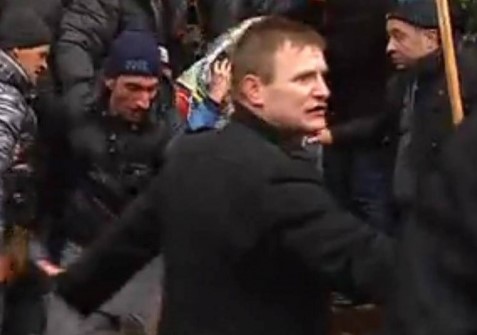 The man believed responsible for a chemical attack on Russian opposition leader Alexei Navalny was almost certainly a leader of the aborted attempt in 2014 to seize control in Kharkiv, Ukraine, and form a so-called ‘Kharkiv people’s republic’, like the  Kremlin-backed formations in Donbas.

The Russian police have shown no interest in identifying and apprehending the man whose attack on April 27 may have left Navalny blind in one eye.  Bloggers and journalists have proven much more active.  There is video footage here of the suspected assailant shortly before the attack, and Yevgeny Bryzgalin examined the REN-TV video footage showing the attack and the assailant fleeing.  The TV station, which has often produced anti-opposition programs, chose to blur the attacker’s face, however there are varying degrees of concealment.  In general, the man’s build and specific items of clothing suggest it is Petrunko, and certainly Navalny himself seems in no doubt. Hurling green ink is common in Russia, but in this case the doctors believe that the ink must have been laced with some more corrosive chemical substance.  Navalny accuses the Kremlin and President Vladimir Putin’s administration of being behind the attack.  Yes, others carried it out, but those others are always provided with suspiciously detailed information about his movements.

Petrunko is a known activist of the pro-Kremlin SERB movement.  Another SERB activist Alexei Kulakov was also identified.  He first denied being there when asked by Novaya Gazeta, but then admitted to his presence, but claimed to not know the man who had thrown the toxic substance.

The SERB movement, and the above-mentioned activists, are notorious for their involvement in such actions.  Petrunko was recently jailed for 7 days on administrative charges for hurling urine at pictures during a Jock Sturgess exhibition.  The fact that he was punished is the only unusual thing about that incident. He was, for example, an accomplice to the attack on 76-year-old civic activist Vladimir Ionov in October 2015.  On that occasion also, the attackers added some corrosive chemical to the standard ‘zelyonka’ or green antiseptic ink.  There are also numerous examples where Petrunko has behaved as provocateur, enabling the police to detain peaceful protesters holding single-person pickets.

Given the relative impunity with which Petrunko and his colleagues have carried out numerous attacks on opposition figures, lone picketers, etc., it is certainly worth noting his undoubted role in the attempts to seize control in Kharkiv in March 2014.  He can be seen very visibly here (around 2.40).

In March 2016, political commentator Dmitry Florin presented what was known about Petrunko in a text entitled ‘The Kremlin’s secret butchers’.

He believes that Petrunko and others are effectively working for Russia’s FSB or security service, though officially as ‘volunteers’.  In this capacity, he wrote, they are helping the Kremlin to stir up separatism in Ukraine and to crush the opposition in Russia.

Around 100 people were injured during the failed seizure attempt in Kharkiv in 2014, and there is harrowing video footage of the beating and humiliation of people who tried to defend the regional administration building.

It should be stressed that all efforts in March to fully seize power in Donetsk, Luhansk, Kharkiv and Odesa essentially failed, despite the large number of Russian ‘tourists’ of athletic build who poured across the border from Russia and heavy Russian support.   Some of that support is revealed in the Glazyev tapes, named after Sergei Glazyev, a senior advisor to President Vladimir Putin.  In intercepted conversations, he can be heard stressing that the calls for intervention must come from ‘locals’.   The attempts to seize cities in the Donetsk oblast were backed in early April by heavily armed men led by former Russian military intelligence officer Igor Girkin and others. 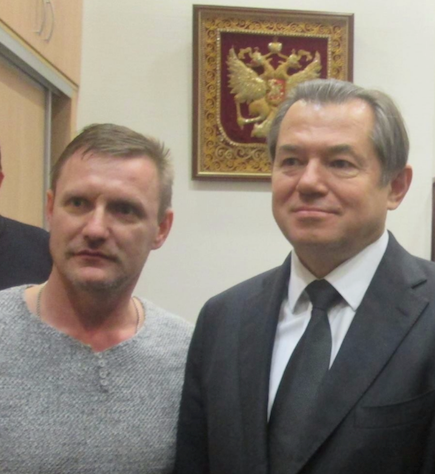 There are no details to explain the photo currently circulating of Petrunko next to Glazyev.  Nor, however, is there any reason to believe it a fake.

Putin made no pretence about his attitude to what he called ‘Novorossiya’ and which, in his view, included not only Donbas, but also the Kharkiv and Odesa oblasts.

Attempts to repeat the Donbas scenario in Kharkiv and Odesa failed, however their inclusion in Putin’s vision of a so-called ‘Novorossiya’ was clearly articulated, and there is ample evidence of Russian funding of pro-Russian activists in both regions.

In Kharkiv the attempt to seize the regional administration buildings came on March 1, 2014.   People were dragged out of the building, beaten and forced to crawl through a so-called ‘corridor of shame’.  Those who refused were dealt with brutally, with the police only intervening where a person’s life was clearly in danger.

At the time, Petrunko posed as the leader of the ‘South -East’ movement, and wrote letters to Putin, essentially calling for the latter to intervene in Ukraine to ‘save’ those with Russian roots.  “We all ask mother Russia to defend its children, who cry, languish in prisoners and perish with pride in being Russian”.

Although he calls himself a native Kharkiv resident, and in a later article, is described as a citizen of Ukraine, Petrunko seems to have grown up, from the age of 3 months, in a Russian children’s home.  He also speaks of voting in Russia, which he would not be able to do as a Ukrainian citizen.

Florin believes that Petrunko is one of many of the FSB’s so-called ‘volunteers’.  While in fact, trained and financed for work carrying out certain tasks, whether in seizing power in Ukraine or helping to set up and/or attack the opposition in Russia, they have no official status to raise embarrassing questions if arrested or taken prisoner.  Since the Kremlin’s main fear now, he writes, is of a ‘Russian Spring’ at home, this is where such faithful servants are deployed.