Ukraine faces human rights court hammering over investigation of Odesa 2 May TragedyOdesa Smoking Gun Leads Directly to Moscow"US guilty of genocide": Kremlin supports anti-Maidan festival with links to the German far rightOdesa 2 May Suspect: We were financed by MoscowVital Probe of Odesa May 2 Tragedy stymied because of questions answered?Movement at last on Odesa 2 May investigationRussia Today, or why Odesa May 2 is different from BaltimoreOdesa May 2 Investigation: A Failed Test for Ukrainian JusticeMore Evidence against Incendiary Lies about Odesa 2 MayContinuing Obstruction of Odessa May 2 InvestigationPropaganda that KillsOdessa May 2 trial turns into farce as Russia continues ‘massacre’ propagandaBad Start to Crucial Odessa May 2 TrialsRussia’s New Odessa FileOdesa "Massacre" Propaganda vs. the FactsDangerous silence over police role in Odessa May 2 eventsWithout Double StandardsWhat Russian TV won’t show about the events in OdessaCVU: Pro-Russian activists sold information about pro-Ukrainian activists in OdessaUHHRU condemns police role in Odessa tragedy
• Topics / Politics and human rights 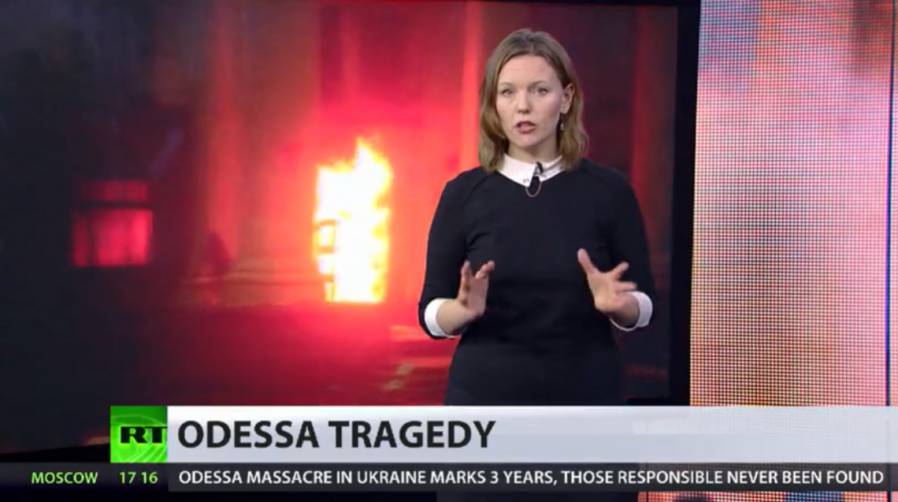 On the third anniversary of the tragic riots and fire in Odesa on 2 May, 2014 which killed 48 people, both Russian President Vladimir Putin and the state-controlled Russian media have continued to push the propaganda line that this was a ‘massacre’ by Ukrainian nationalists.  Since the Kremlin-funded Russia Today [RT] and other media quote international reports which gave quite different conclusions, there can be no suggestion that the lies are not deliberate. They are also toxic and are known to have been used to stir up young men and prompt them to go and fight, and many to die, in Donbas.

There is considerable evidence that Russia was directly planning events in Odesa aimed at creating a so-called ‘people’s republic’ as in Donbas. It is no accident that the original attack on a peaceful pro-Ukrainian rally was carried out by the Odesa Druzhyna, an anti-Maidan, pro-Russian movement which had only recently emerged and whose members appear to have been paid from Moscow.

Events got out of hand and turned into street riots in which both sides used force and weapons, resulting in 6 deaths.

It is certainly true that pro-Ukrainian activists marched on Kulikovo Pole where there were anti-Maidan tents, intending to burn them, and that anti-Maidan activists barricaded themselves into the Trade Union building.  The Russian President and state-controlled media, however, omit certain crucial facts.

The pro-Ukrainian activists were shot at and had Molotov cocktails thrown at them from the roof of the Trade Union building and windows.  All independent reports have agreed that with Molotov cocktails being thrown at and from the building, there is no way of ascertaining who caused the fire, which caused the death of 42 anti-Maidan activists.  All died either directly from the fire / smoke inhalation, or fell to their death jumping from the windows.

It is likely that the devastating tragedy of that day prevented Odesa from following the scenario in the Donetsk and Luhansk oblasts.

Within hours of the tragedy, Russian media and officials were pushing a story about an Odesa ‘massacre’.

In Putin’s rendition, “Ukrainian nationalists drove defenceless people into the Trade Union building and burned them alive”.  He said that “the world community has no right to forget about this or allow a repeat of such barbaric crimes in the future”.

Russia Today went considerably further, repeating lies told from the outset that people had been beaten to death after they escaped from the building.

There is a clear attempt to avoid mentioning that the violence originally came from anti-Maidan activists and that the first victim -  Maidan activist Ihor Ivanov – was almost certainly killed by Vitaly Budko, an anti-Maidan activist who can be seen on footage shooting from an automatic rifle.  There is video footage showing the original attack on the peaceful march, and the supposedly ‘defenceless people’ left a large number of bullets from their guns on the roof of the Trade Union building (details of the video footage can be found here)

Three years and an international investigation later, Russia Today and all other such media are continuing to carefully select the footage presented and adding details that have been totally refuted by the bi-partisan 2 May Group and the Council of Europe’s International Advisory Panel [IAP]

They are guaranteed to omit details about the frantic attempts by pro-Ukrainian activists to drag over scaffolding and rescue people from the building, and the clear evidence from the reports streamed by journalist Serhiy Dibrov that nobody realized how many people were in the building.  Instead they show the one Maidan activist shooting a pistol at the building.  Mykola Volkov, who has since died of tuberculosis, was shooting at a window from which shots were being fired at pro-Ukrainian activists and his pistol contained blank bullets.  None of that, however, gets a mention with the footage alone a must for all propaganda programs.

While the toxic propaganda has been thought up and lavishly funded from Moscow, it must be acknowledged that the Ukrainian authorities have only helped through their failure to properly investigate the events and punish those whose part in the events can be proven.

The Russian reports all claimed that there were no answers which is not strictly true.  The 2 May Group, IAP and the official investigators are clear that most, if not all the deaths that day could have been averted had the anti-riot action plan been implemented, and had the emergency services not taken 45 minutes to arrive.  There are other worrying indications that some officials may have collaborated with the anti-Maidan activists.

All of this was highlighted in the IAP report and has been stated on numerous occasions by the 2 May Group.  There are currently some prosecutions underway over these specific omissions.  This cannot, however, compensate for the authorities’ general failure to carry out an effective investigation.

This would clearly not stop Russia’s propaganda machine which simply ignores the parts of reports that contradict its narrative, but it is, nonetheless, vital, and owed to the victims and their families.

The concentration here on RT or Russia Today is not for want of examples from the Russian-based media.  It is, however, of particular concern that a Kremlin-funded TV channel openly broadcast in all western countries should be allowed to so grossly mislead its audience.  RT, it should be noted, is regularly provided as a Russian channel, alongside reputable news channels in hotels and other public places.  How are audiences who only dimly know where Odesa even is to understand the toxic lies that they are being fed?

A century and more ago, pogroms were sparked by lies told about terrible crimes purportedly committed by Jews.  Similar techniques were used in the recent Rwanda genocide.  Are lies told deliberately to arouse rage and a wish for revenge against the Ukrainian perpetrators of an ‘Odesa Massacre’ that never happened any different?