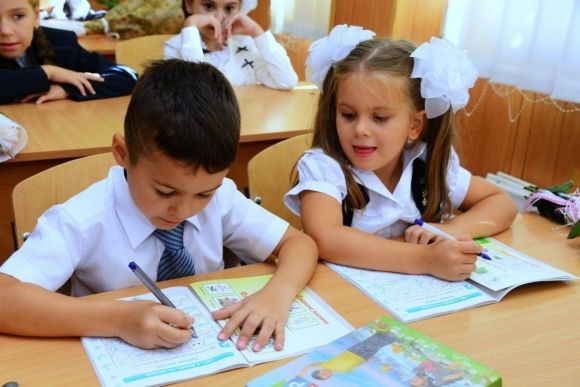 Following the International Court of Justice’s order that Russia remove impediments to the use of Ukrainian in Crimean schools, Ukrainians in Sevastopol have been told that Ukrainian is not a state language and that lessons can only be extra-curricular.

Krym.realii reports that on May 4, members of the Ukrainian National-Cultural Society of Sevastopol held a meeting with Mikhail Rodikov, director of the Sevastopol department of education under Russian occupation.

They spoke of the fact that in 2014, the Ukrainian language had been effectively outlawed in secondary schools, both as a language to study and of tuition.  There is now no possibility for Ukrainians to study in their native language.

Rodikov responded by saying that Ukrainian could only be reinstated as an elective subject.  These, however, the members of the Ukrainian Society noted, are held at inconvenient times and cannot provide adequate education in the children’s native language.  Ukrainian classes need to be reinstated, with several subjects taught in Ukrainian.

In marked contrast to the upbeat claims made by the Russian team during March hearings at the International Court of Justice in the Hague, Rodikov responded that according to Russian legislation, Ukrainian is not a state language in Sevastopol, and that there are no legal grounds for secondary school education in Ukrainian.

The Russian constitution of Crimea, in fact, names three state languages – Ukrainian, Crimean Tatar and Russian, however Ukrainian classes have virtually disappeared (and the situation with Crimean Tatar is also not good).

Considering that Russian President Vladimir Putin claimed that ethnic Russians and Russian-speakers in Crimea needed Russian ‘protection’, it is worth noting the percentages on the eve of Russia’s invasion.  90.7% of school students studied in Russian; 6.5% in Ukrainian; and 2.7% in Crimean Tatar.  99.2% of all Crimean children studied Russian as a subject.

There were 7 schools with the entire program in Ukrainian and 15 in Crimean Tatar, as well as several schools with two languages.

It was repeatedly claimed that the fall in number of Ukrainian language classes was because of lack of demand.  In fact, it seems clear that parents were put under serious pressure to accept their children studying in Russian.

It should be noted that it became virtually dangerous within days of Russia’s invasion to demonstrate Ukrainian flags, or speak openly in Ukrainian.

The Crimean Human Rights Group also points to the widespread use of hate speech in which ethnic Ukrainians are most often subjected to. For this reason alone, the census carried out in 2014, under Russian occupation, probably does not represent the true picture as regards the number of those who view themselves as Ukrainian and call Ukrainian their native language.  Even the percentages that did emerge make the fact that there are only 28 classes for the whole of Crimea manifestly insufficient.

It was material like that provided by the Crimean Human Rights Group that convinced the judges of the UN Court at the Hague that provisional measures were needed immediately to stop Russia’s discrimination of ethnic Ukrainians and Crimean Tatars under Russian occupation.

Although the Russian media made much of the Court’s refusal to implement provisional measures against Russia’s supply of weapons, etc. to the militants, the Court very importantly agreed that it should examine both claims.  It also agreed that the situation in occupied Crimea did not brook delay.  It demanded that Russia stop restricting education in Ukrainian and stop persecuting the Crimean Tatar Mejlis or representative assembly (details here).

Although Putin’s press secretary Dmitry Peskov had stated that Russia would comply with the Court’s ruling, Russia has since backtracked over the Mejlis, and is showing no intention thus far of genuinely improving access to education in Ukrainian.