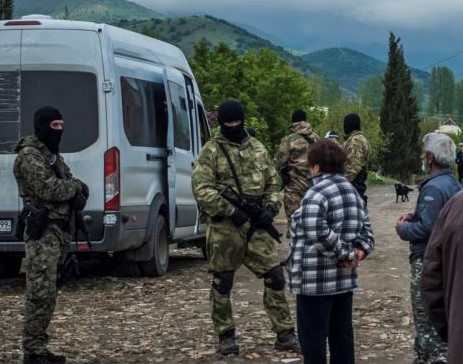 The key element in any attempts to terrorize the population is uncertainty: it should be unclear who will be the next victim – it could be you or your family. The son of  the head of the Sudak Regional Mejlis was targeted in one of the two armed and unexplained searches of Crimean Tatar homes on May 8.  If Amet Ametov was at least released on Monday evening, his neighbour Server Yusuf who was also detained, is reported to have been taken away to the Krasnodar region of Russia.

Around 10 armed OMON officers arrived at the home of the head of the Sudak Regional Mejlis, Ilver Ametov early on May 8.  There are slightly conflicting reports about who was present when the armed officers first burst in, though all note the gratuitous violence used against Ilver’s 42-year-old son Amet, who was forced to the floor and kicked, before having handcuffs put on him. All of this happened in front of his four children, aged between 4 and 12.  Such total disregard for the trauma to very small children is yet another hallmark of such searches under Russian occupation.

Ilver Ametov was told that they were looking for illegal weapons and drugs.  This, in fact, has been the standard refrain in all such armed visitations since soon after Russia’s invasion of Crimea.  They normally mention ‘prohibited books’ as well, and indeed, after finding no illegal weapons or drugs, they turned their attention to the family’s books.  Ametov was asked whether he had any “unlawful” books and told them that he did not understand what they meant by the question, they should look themselves. 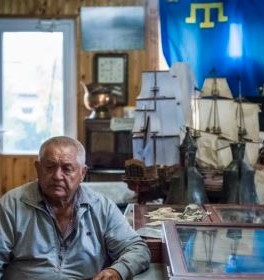 If, as other reports suggest, the search followed an anonymous ‘report’, it came up with nothing.  Nor was it likely to.  Ilver Ametov has a private ethnographic museum in his home, with traditional weapons dating back to the 13th century.  This was no secret to anybody.  Nor is the first time that his home has been subjected to a search.  Russian FSB [security service] men turned up on Dec 2, 2015 while he was in hospital.  On that occasion as well, no explanation was given for the early morning visitation.

On May 8, however, his son was taken away in handcuffs, and the refusal to explain why is especially disturbing. The OMON officers took away only the CCTV video camera which Ilver Ametov had attached to the home, both because of the museum inside and because of a children’s playground nearby.

Family members reported on Monday evening that Amet had been released. It remains unclear whether the officers have seen the need to provide any pretext.

Krym.Realii notes that Ilver Ametov is a well-known businessman and public figure in Sudak.  In March 2016, there were moves by the Russian-controlled authorities to demolish 6 constructions, including a market which he owns.  It was assumed then that Ametov was facing reprisals for his refusal to collaborate with the authorities.

That move came soon after the first clear indication that Russia planned to go through with its threat to ban the Crimean Tatar Mejlis, or self-governing elected body of the main indigenous people of Crimea.  The Mejlis at the time expressed concern that the proposed ban, if it were applied to local, autonomous Mejlis structures, could place over 2 thousand people, including Ilver Ametov, in danger.

The Russian police vans then blocked all exits to the Crimean Tatar village of Morskoye on the outskirts of Sudak.  Local resident, Server Yusuf was stopped at the cordon while driving his wife to the Sudak hospital.  They were forced to turn around, with the police coming back to their home and carrying out a search.  Witnesses report that the home was then surrounded by armed swift response officers.

Toroz Yusuf was told that the officers suspected his son of manufacturing drugs.  They took him away, claiming that they were taking him to the police station.  His father, however, went to the station and was told that his son was not there.

He was instead held for several hours in a local hotel, whose manager confirmed to Krym.Realii that men in uniform had paid for a hotel room.  She was not prepared to comment on whether Server Yusuf had been taken there.

According to a local activist Lenora Dyulber, the Yusuf family are neither especially active in civic life nor devout Muslims.  Both civic activists and practising Muslims have, to a large extent, become groups at risk under Russian occupation.

Dyulber later reported that Server Yusuf was being taken to the Krasnodar region in Russia, supposedly in connection with a criminal investigation initiated there. This does not explain why the behaviour of the men in Russian uniform bore considerably more resemblance to an abduction, and why it appeared to be linked to the unexplained harassment of the family of a Sudak Mejlis Head.