Speak out for those whom Russia stops from being at Eurovision 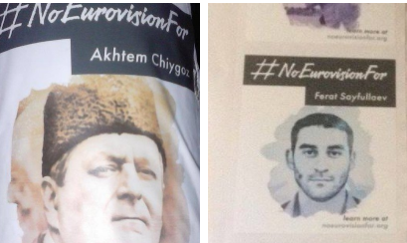 Spare a thought for the 44 Ukrainian political prisoners who cannot be at the Eurovision competition currently underway in Kyiv, nor even see it from their prisons in Russia, or Russian-occupied Crimea.  Most have not seen their families for a long time and it could be decades before they return home unless international pressure can be brought to bear on Russia.

This is why Ukrainian activists have launched the initiative #NoEurovisionFor  They stress that they are not trying to ‘politicize’ Eurovision.  This is a call to solidarity with people persecuted for their words, or their faith, or simply victims of Russia’s undeclared war against Ukraine.  This Eurovision is about celebrating diversity and that must include those whom, for one reason or other, Russia is persecuting like so-called ‘dissidents’ in the Soviet Union.

The activists are reaching out to visitors to Kyiv and handing out information about prisoners like Ukrainian filmmaker Oleg Sentsov and civic activist Oleksandr Kolchenko, Crimean Tatar leader Akhtem Chiygoz and the very many others.  On their website, they invite people to help share information about political prisoners, via social networks or any other channels.

Of particular importance is the fact that for the first time, we are able to donate money to help the families of the 44 prisoners, many of whom have small children.  As reported here, there are currently 69 children in occupied Crimea, many of whom were themselves deeply traumatized when armed and masked Russian enforcement officers burst into their homes and took their fathers away in handcuffs.

After many months when children would wait in the court building, hoping to see their father when he was brought to the court for detention hearings, the occupation regime began making all such hearings closed to all but the men’s lawyers.

The activists are also inviting people – both those now in Kyiv and others concerned about Ukrainian prisoners of the Kremlin – to join in creating a European network which could, if needed, translate texts, organize pickets, etc.

Of the 44 political prisoners whom Russia is holding, most are from Crimea, including the very first political prisoner whose case was only learned about recently.  13 men, including renowned filmmaker Oleg Sentsov are either serving huge sentences or imprisoned facing trial on ‘terrorism’ or ‘sabotage’ charges, despite no acts of terrorism or sabotage in Crimea under Russian occupation.  In all cases, the only ‘evidence’ is from men held incommunicado and totally under the control of the FSB.  Many have since stated clearly that the ‘testimony’ was extracted through torture.

It is exactly three years since the Russian FSB arrested them and Gennady Afanasyev (since released on health grounds) on totally spurious terrorist plot charges.  The men had peacefully opposed Russia’s occupation, and the case has been condemned as “ideologically motivated terror” against dissent.

In August 2016, the FSB came up with the first of two new ‘Crimean saboteur’ plots’.  In the two, seemingly unrelated, ‘cases’, 10 men have so far been arrested,  Yevhen Panov, Andriy Zakhtei, Redvan Suleimanov and Volodymyr Prysich were seized in August, with all forced to give ‘confessions’ before cameras.  Panov and Zakhtei retracted all testimony when finally, only after the intervention of the European Court of Human Rights, allowed to see lawyers, and both have spoken of the torture they were subjected to.

Two academics - Dmytro Shtyblikov and Oleksiy Bessarabov - were arrested in Sevastopol together with a retired Ukrainian military officer Volodymyr Dudka.  The FSB claimed that they were “members of a sabotage – terrorist group of the Ukrainian Defence Ministry’s Central Intelligence Department” who were planning acts of sabotage on military and other infrastructure”. Two much younger Crimeans  - Oleksiy Stohniy and Hlib Shabliy were arrested 10 days later, with this followed on Nov 24 by the arrest of Leonid Parkhomenko, a long-retired Black Sea Fleet captain.

Only one of the 6 men arrested in November – Volodymyr Dudka – has been able to see a lawyer of his choice and it is telling that he is the only person who has formally retracted previously given ‘confessions’.

Emir-Usein Kuku is almost certainly imprisoned because of his human rights activities, and after an attempted abduction only turned into an FSB ‘search’ after Kuku’s cries for help attracted attention.  It is likely that other men, such as Muslim Aliev, were arrested for their strong civic position, while Vadim Siruk was quite possibly targeted as an ethnic Ukrainian to warn others against converting to Islam.