’Decommunization’ in Ukraine Carried Out Using Communist Methods5 years for a red flag? Controversial decommunization law used against Ukrainian veteransUkraine’s Decommunisation Law hammered by Venice Commission for violating democratic standardsUkraine’s Communist Party OutlawedCommunist party ban will be slammed in Strasbourg, along with original decommunization lawPresident signs dangerously flawed ‘decommunization’ laws"Decommunization" Laws: Deeply Divisive and Destined for StrasbourgAnalysis of the Law on Prohibiting Communist SymbolsParliament ignores public opinion on Ukraine’s history. Will the President?Politicizing History: Parliament adopts Dangerously Divisive LawsPhantoms are phantomsFighting phantomsNo dossier on ShukhevychWorking to reveal the truth about OUN and UPAMore information from SBU archivesSBU is planning to tell the truth about Soviet efforts at discrediting the UPAPresident called on to help lift the seal on KGB archivesOn the 65th anniversary of UPA the arguments still rageFirst joint memorial unveiled for Soviet soldiers and fighters of OUN-UPAUkrainian gets suspended sentence for T-shirt with Soviet symbol
• Topics / Freedom of expression

Ukrainian student sentenced for ‘propaganda of communism’ on Facebook 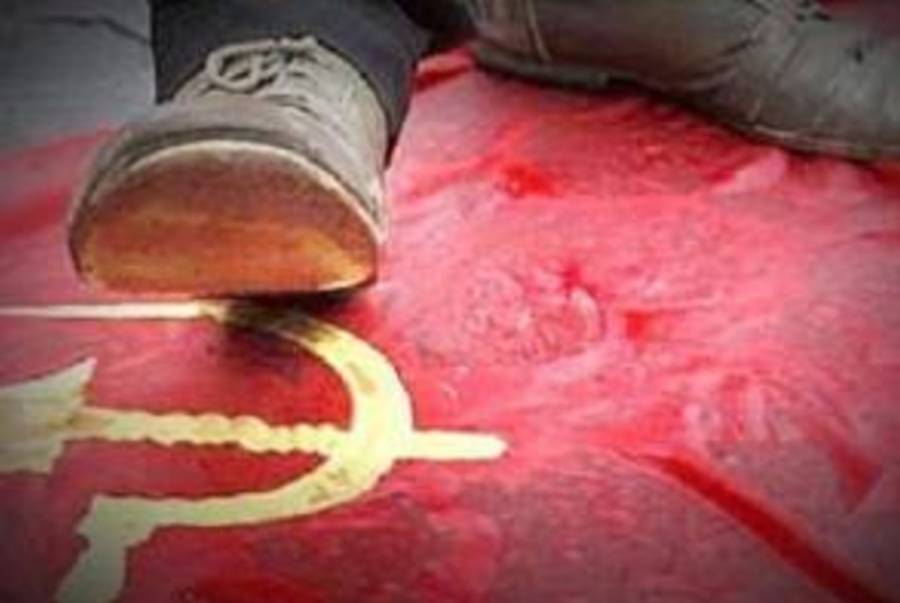 A third-year Lviv university student has become the first Ukrainian to receive a real, though suspended, sentence under a highly controversial ‘decommunization’ law, for photos and other material with communist symbols posted on Facebook.  The conviction is already of concern, with this only compounded by the lack of real clarity as to what the young man posted.

The Lviv Oblast Prosecutor’s Office reported the case on May 10, explaining that it had been run by the investigative department of the regional police, with the indictment under Article 436-1 of Ukraine’s Criminal Code (preparing or circulating communist or Nazi symbols and propaganda of communist and Nazi totalitarian regimes).

A little more detail can be found in the abridged version of the Halytsky District Court in Lviv ruling.  This states that the linguistic assessment concluded that there was “propaganda of elements of communist ideology which constitutes circulation of tendentious information aimed at idealising and popularizing communist ideology, and in the public use of products with symbols of the communist regime, including publications on Vladimir Lenin, a person who held a leading role in the highest bodies of power in the USSR, his philosophical-political quotes, as well as common communist slogans: “Lenin lived, Lenin is alive and will live on”;  “The plan is the law; fulfilment is our duty; over-fulfilment is an honour!”.

The young man opted for admitting the charges and cooperating with the prosecution, and received a two-and-a-half-year restricted liberty suspended sentence, with a probation term of 1 year.  He may well have believed – or been told - that this was the only way of avoiding imprisonment, but it is unfortunate that the indictment was not challenged.  The law was condemned from the outset by human rights groups, and has since been strongly criticized by the Council of Europe’s Venice Commission.

The Law on the Condemnation of the Communist and National Socialist (Nazi) Regimes and Prohibition of Propaganda of their Symbols [hereafter the Law] is one of four contentious ‘decommunization’ bills adopted in April 2015.  All four were signed into force by President Petro Poroshenko on 15 May 2015, with this presumably serving as the starting point for the criminal charges against a young man in the Lviv oblast.

Poroshenko promised that certain amendments would be made to the laws, however did not mention changes to the proposed sentences of up to 5 years imprisonment for circulation or public use of, for example, a hammer and sickle or for material in print or in the media which denies the overall criminal nature of the entire Soviet period from 1917 to 1991.

The Law was scrutinized by the Council of Europe’s Venice Commission and the OSCE Office for Democratic Institutions and Human Rights (OSCE/ODIHR) on Dec 21, 2016.  The joint interim opinion issued was, as expected, negative.  It found that the Law had serious failings which could infringe people’s right to freedom of expression and of association.

The constitutional experts were careful to stress that the Law has a legitimate aim, and that Ukraine has the right “to ban or even criminalise the use of certain symbols of and propaganda for totalitarian regimes”.  However, the Law’s scope is much too broad and the sanctions envisaged, which include long terms of imprisonment, too severe.

The Law prohibits the creation and orders the forced termination of any legal entity propagating communist and / or Nazi regimes, or that uses their symbols. It also criminalizes propaganda of such regimes, with this understood as referring to one of the following:

The interim opinion stated that the Law is too broad in scope and introduces excessive sanctions, while its provisions “are not precise enough to enable individuals to regulate their conduct according to the law and to prevent arbitrary interference by public authorities.”  It recommended the use of a less extensive and exhaustive list of symbols; a clear definition of the term ‘propaganda’, and, importantly, stressed that:

"Only those acts that constitute an actual danger to society should entail criminal responsibility, which should be proportionate to the seriousness of the offence committed. A mere display of a symbol or use of a name should not result in imprisonment.”

The law has since been cited as the reason for banning Ukraine’s Communist Party. During Victory Day demonstrations both this year and in 2016, people were detained and / or protocols drawn up merely over the use of communist symbols.

A young man in Lviv Oblast now has a criminal record for something which a profoundly flawed law has criminalized.  Given the Venice Commission’s opinion, it seems only a matter of time before the European Court of Human Rights finds that a person’s rights have been violated by the law.