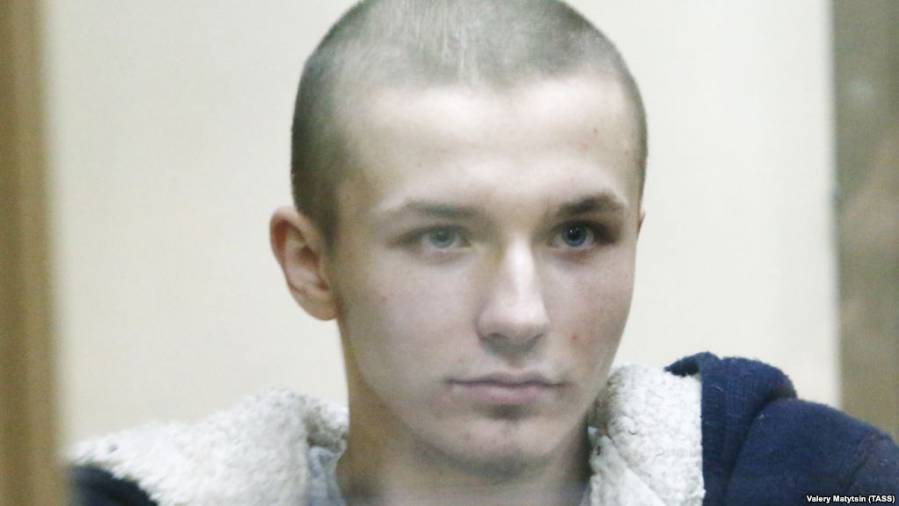 Artur Panov, who is from the Luhansk oblast, has been in Russian custody since his arrest on 5 December 2015, two months before his seventeenth birthday.  The situation is rather different from all other cases reported here involving Ukrainians held in Russia, since Panov himself, now 19, has admitted to some of the charges against him.  There remain major reasons for concern, not least because of his age and certain doubts about his mental health.

Panov lost consciousness during a court hearing in Rostov on the Don on May 10, a week after he declared a dry hunger strike, demanding to be returned to Ukraine.  He collapsed in the cage he and recognized political prisoner Maxim Smyshlayev were held in and an ambulance needed to be called. His lawyer had not been able to see the young man during the May holidays, and only learned that he was indeed still on hunger strike in the courtroom.

Panov has repeatedly mentioned health issues over recent months which have not been addressed, as well as suggesting that there were attempts to poison him.  How real the latter fears may be is unclear, however any dry hunger strike will obviously put his life in danger.

The Memorial Human Rights Centre has thus far only declared Maxim Smyshlyaev, who is accused of being Panov’s accomplice, a political prisoner.  In Panov’s case, this is clearly difficult since the latter does not deny some of the charges.  Memorial does, however, report that at the hearing on May 11, Panov stated that he had not planned to go through with the crime and that he had told the investigator that this was the case.  He has earlier admitted to having prepared an explosive device, but asserted that he never planned to hurt anybody.

Ukrainian human rights groups have also not declared Panov a political prisoner, and their focus is really on ensuring that the young man is returned to Ukraine and tried here.  There are concerns about his mental stability, and although his lawyer has said that the official psychiatric report found him mentally fit, his behaviour had clearly aroused doubts earlier, even before his arrest.

Maria Tomak from the Media Initiative for Human Rights stresses that clear criteria for considering a person to be the victim of political persecution are not met in this case.  On the other hand, she says, the fact that he had received a psychiatric diagnosis before being detained can be used to demand his return to his homeland under the relevant convention regarding repatriation for medical treatment.

She notes that there are unfortunate precedents where people with psychological problems have been used by the Russian FSB [security service] to fabricate criminal charges.

It is telling in this case, that Russia has significantly increased the charges, and has held Maxim Smyshlyaev prisoner for over a year on charges of being an accomplice.  These, Memorial HRC noted in declaring Smyshlyaev a political prisoner, are based solely on the fact that he corresponded with Panov.

Panov was born in Krasnodon, a city in the Luhansk oblast which is currently under the control of Kremlin-backed militants.  At the beginning of the conflict in Donbas, he is reported to have helped the Ukrainian Army, and informed them of the movement of Russian military men and militants around the Luhansk oblast.  It is possible that the Russian investigators upped the charges against him after learning of this and / or that he had once been in trouble with the law in Ukraine.  On 7 April 2014, on the very eve of the military conflict in Donbas, Panov was found guilty of having made a false bomb alarm (and demanded money).  He was just 15, and any punishment was therefore waived.

He was still only 16 when Russia first arrested him, just 11 days after he arrived in Rostov, and he has been in detention ever since.  While human rights groups cannot declare him a political prisoner under the circumstances, they also cannot exclude the possibility that he was tricked into coming to Russia and into being ‘found’ with a homemade bomb.

An explosive device is clearly a serious matter, however his age and his general taste for hyperbole do make the alleged plans to blow up a shopping centre seem rather theoretical.

The investigators, however, claim that Panov, who had declared himself to be a theorist of the IV generation of the Red Army Faction and circulated leaflets against Russian President Vladimir Putin in Luhansk as part of this organization, was planning several terrorist acts.  He seems to have admitted that he had made the explosive device so as to “possibly carry out a terrorist act in revenge against the Russian regime for its actions in the so-called Luhansk people’s republic”.  He has totally denied ever trying to involve Smyshlyaev, and, as mentioned, has said that he never planned to carry an act of terrorism through.

Panov seems to write poetry and is quoted as saying, before his imprisonment, that he lives to write verse which will exist after he ceases to be.  He also administered a Red Army Faction group on the social network VKontakte, and it is the posts here that the investigators are also claiming prove his terrorist plans.

The investigators assert that he began writing to Smyshlyaev to enlist an accomplice to carry out his terrorist plans.  They have tried to use the fact that Smyshlyaev suggested that they continue chatting on Skype rather than VKontakte as proof of a criminal conspiracy.  In fact, it is very well-known that the FSB has unrestricted access to the Russian-based VKontakte and any correspondence among people who criticize the current Russian regime is better carried out away from FSB surveillance.

During the same May 11 court hearing, Smyshlyaev stated that his testimony had been seriously distorted, and asked that his statement be added to the testimony.  They had added things he never said, and where he had spoken of a ‘protest action’, the investigator had written down “act”, with this clearly intended to indicate discussion of a terrorist act.

Whatever Panov is guilty of, he was just 16, and there are only his rather grandiose utterances to suggest that the explosive device would have even been used.  Any production of a homemade bomb is undoubtedly dangerous, however the manufacturing of charges against Smyshlyaev alone raise concern that Russia is using this case for purposes that have little, if anything, to do with ensuring public safety.