Russian prison staff on trial after 16-year-old Ukrainian tortured to death16-year-old Ukrainian beaten to death by Russian prison staffEven Kremlin supporters admit Russia has created ‘a humanitarian disaster zone’ in occupied Ukrainian cities Russia razes Ukrainian city to the ground and says ‘there’s no point’ to rebuilding it Russia instals FSB man, other Russians to ‘govern’ occupied Kherson where the population hates themRussia deports Ukrainians to occupied Donbas, forcing them to fight its war against Ukraine Russian invaders fire on evacuation buses, abduct driver for propaganda video Russia is bombing Azovstal in Mariupol where 1,000 civilians, including many children, are sheltering SOS! Save the civilian population in Bucha, Irpin, Hostomel!Protests throughout Ukraine following 7-year sentence against civic activist Serhiy SternenkoZelensky’s ‘survey – legally questionable and cynically populistUkraine President Zelensky urged to veto populist law on forced castration for ‘paedophiles’Tortured to death for defending Ukraine. The first war crimes Russia brought to DonbasLviv teenagers on trial for fatal attack on Roma settlementRussia fakes popular referendum to justify annexing Crimea then bans all peaceful protestReport the loss of civilian population, the destruction of housing and infrastructure as a result of the armed conflict in eastern UkraineRussia to pay large compensation for torturing 16-year-old Ukrainian to deathPragmatism Prevails over Populism in UkraineHorrifically tortured and murdered, or imprisoned in Crimea and Donbas for the Ukrainian FlagTortured to Death for Defending Ukraine’s Flag and Ukrainian Unity
• Topics / News from the CIS countries 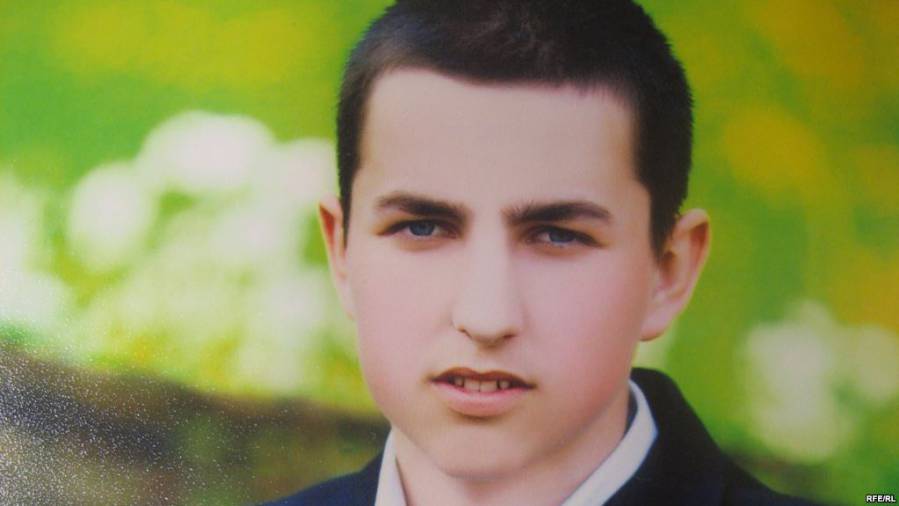 18 months after Vitaly Pop, who was just 16, died of appalling injuries on his first night in a Russian ‘corrective’ colony, two prison officers have received 11-year sentences, with eight others sentenced to terms from two and a half to five years. Although the other young victims reported that Vitaly had received particularly bad treatment because of his Ukrainian accent, this may well have simply served as a pretext, like others, for the savage beating.

Although six other 15-17-year-olds had also received injuries, it was almost certainly only the fatal outcome that prompted action.  There were, even so, attempts at a cover-up.  The young lad’s death could not be concealed since an ambulance had finally been called, but the acting head of the prison order ordered that a report be written claiming that Pop had attacked a member of staff.

Vitaly and the six other lads who had been brought to Belorechensk Prison on Nov 24, 2015 were first forced to strip naked (in late November), and walk through a corridor where they were awaited by masked men who ordered them to do sit ups, then other exercises, and beat and kicked them, ostensibly if they weren’t doing them well enough.

Rights activist Pavel Chikov reported from the court on Friday that the young lads had been forced to urinate on each other.  They had been made to crawl into the toilet area and use a rag to mop up. Pop refused to go through this deliberate humiliation ritual, at which point the officers started beating and kicking him, including blows to the head.  He lost consciousness, and a hose was used to revive him.

Shamkhalov and Krivolapov were the only officers who were charged and convicted of inflicting fatal injuries.  Both were sentenced by Judge NIkolai Stohniy from the Belorechensk District Court to 11 years.  The prosecutor had asked for 13 years for Shamkhalov, but the judge decided that his small children constituted an extenuating circumstance.

Zadneprovsky’s mother burned her son’s clothing and shoes, and the investigators were only able to prove that Zadneprovsky had inflicted one blow (to the back).  It seems that he and the other men received much shorter sentences, from 3 years up.

Vitaly and 6 other 15-17-year-olds were brought to the prison on Nov 24, 2015.  The acting prison head Vladislav Ivanov had told the staff that four of the young lads “planned to disrupt the institution’s order” and he organized a team to break down their will through physical and psychological torture.  Like most of the men, Ivanov was charged only with ‘exceeding his duties’, although he not only initiated the torture, but also ordered that the ICTV cameras be turned off.  He was sentenced on May 12 to 5 years’ imprisonment.

The four young lads whom Ivanov had named did not include Pop.  Two of the officers claimed that they had been told that the young Ukrainian was a member of Right Sector, an ultra-nationalist Ukrainian organization which Russia has demonized.  There was nothing to back such a claim, and it is disturbing that any prison officers could have thought that this could somehow justify the young lad’s horrific treatment.

A 16-year-old lad died because he was sent to a brutal prison, though he himself was anything but a hardened criminal.  As reported earlier, he had been at school in the Transcarpathia region of Ukraine until the summer of 2015 when he and his mother joined his father who had been forced by poverty to seek employment in Kuban (Russia).  Vitaly was planning to enter a trade college, but was working with his parents.  His mother Svetlana Pop says that he had virtually no friends in Russia.  He didn’t drink and went running every evening.

The convicted men’s lawyers have said that they will appeal against the sentences, while Andrei Sabunin says that Pop’s family have a week to decide whether they think the sentences are too light.