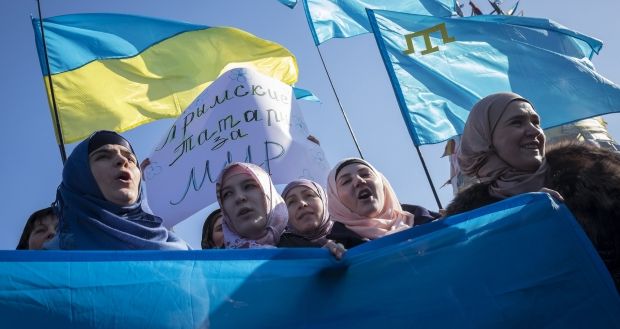 A bill now before Ukraine’s parliament can, according to Crimean Tatar leader Refat Chubarov, finally end any dispute as to whom Crimea rightly belongs to.  The law on regulating the status of the country’s main indigenous people – the Crimean Tatars – is long overdue, and is now especially urgent as it can provide a crucial lever against Russia’s occupation of Crimea and mounting repression.

Article 7 of Draft Law No. 6315 recognizes the Autonomous Republic of Crimea as a national-territorial autonomy of the Crimean Tatar People, created on the territory of Crimea as part of the sovereign and independent Ukraine state.

President Petro Poroshenko spoke during a press conference on May 14 of his support for the creation of a Crimean Tatar national autonomy in Crimea, and said that a constitutional commission has already been formed in parliament to prepare proposals on amendments needed.  Any changes to the Constitution will require a two-thirds majority, and supporters and co-authors of the bill already tabled in parliament propose that this law be adopted as soon as possible, with the Constitutional amendments following.

Full recognition of the Crimean Tatars as an indigenous people, and of a Crimean Tatar autonomy may seem theoretical given Russia’s illegal occupation of Crimea.  They are nothing of the kind and it is therefore frustrating that over three years after Russia invaded and annexed Crimea, the Crimean Tatars’ right to self-determination has still not been clearly set out in legislation.  The procrastination is especially baffling since the Crimean Tatars have suffered the most under Russian occupation specifically because they continue to affirm their self-identification as Crimean Tatars within a united Ukraine.

In a recent interview, Natalia Belitser, a member of the expert group who drew up the draft law now awaiting parliamentary consideration, explained that the need for the law had in fact arisen with the adoption of Ukraine’s Constitution in 1996.  This main law of the country makes a distinction between national minorities and indigenous peoples, but does not go beyond this.

The distinction is critical for several reasons.  An indigenous people normally live on the territory of their ancestors; share a common history, culture and language and identify themselves first and foremost as part of that group.  A crucial point, distinguishing the Crimean Tatars from Ukraine’s huge number of national minorities is that, unlike them, there is no other place to go.  Outside Ukraine, there are large Crimean Tatar diasporas only.  Given the Crimean Tatars’ tragic history of exile following the 1944 Deportation, this makes their plight under Russian occupation particularly poignant.

It was Independent Ukraine who invited the Crimean Tatars to return to their rightful homeland.  For all the failings of countless Ukrainian governments, the Crimean Tatars never doubted their identification as part of Ukraine.  It is probably significant that Russia’s extraordinary banning of Mustafa Dzhemiliev from his homeland on April 22 came just 3 days after he returned to Simferopol after the invasion and demanded that the Ukrainian flag be reinstated on the Crimean Tatar Mejlis building.

It was also the Mejlis who called on Crimean Tatars and other Ukrainians to gather outside the Crimean parliament on February 26, 2014 and stopped Russia from carrying off a coup without the use of Russian soldiers.  It is likely this that has led to the ongoing imprisonment of Mejlis leader Akhtem Chiygoz, the ban on the Mejlis and other forms of repression and attempts to discredit this self-governing body.

Ukraine took far too long, but has now joined the UN Declaration on the Rights of Indigenous Peoples.   Belitser points out that this international document specifically prohibits any military actions or bases, or occupation without the consent of the indigenous people, as provided by their representative assembly.  It was the Mejlis who emphatically spoke out against Russia’s annexation of Crimea from the outset, and had the Crimean Tatars then been officially recognized as the peninsula’s main indigenous people, the situation now might be different.

It still took parliament almost two years to adopt a resolution which called for the urgent preparation of legislation on the status of the Crimean Tatar People*.  Draft Law No. 6315 was tabled in April this year, with its authors including Crimean Tatar leaders (and MPs) Mustafa Dzhemiliev and Refat Chubarov.

The law establishes the legal norms regulating issues around the representation o the Crimean Tatar people within bodies of power, including the Verkhovna Rada (Ukraine’s parliament), the Crimean parliament and bodies of local self-government.  It also addresses the issue of participation by Crimean Tatar representative bodies in international organizations and court proceedings. It defines the legal status of the Qurultay or national congress and Crimean Tatar Mejlis, as well as regional mejlis bodies (which are autonomous).

This is particularly critical given Russia’s ban on the Mejlis as supposedly ‘extremist’.  The ban is in breach of a recent order from the International Court of Justice and flouts most international and European structures and democratic states which recognize the Mejlis as representative body of the Crimean Tatars.

Refat Chubarov has told the Centre for Journalist Investigations that this law will help Ukraine to take more effective action to end Russian occupation.

“We believe that without directly involving the Crimean Tatar, Ukraine will find it difficult to get Crimea back”.  The adoption of the bill, Chubarov adds, provides a way for Ukraine to overcome all kinds of hurdles and international pressure.  He recalls proposals that Crimea be ‘leased’ to Russia for 50 years, or suggestions of a ‘deal’ between the USA and Russia, involving Crimea being tacitly ‘handed’ to Russia.

Eskender Bariev, a now exiled Crimean Tatar rights activist, believes that Russia is worried at the prospect of Ukraine’s regulation of the status of the Crimean Tatar.  They understand that this weakens their position on Crimea and are generally frightened of recognizing the Crimean Tatars as the indigenous people.

Hardly surprising, when, as Chubarov puts it, the draft bill “puts an end to any discussion regarding the status of the peninsula which is part of Ukraine since Crimean’s indigenous people have defined themselves as part of a single Ukrainian state”.