In honour of Yevhen Hrytsyak
• Topics / We remember

In Memoriam: Yevhen Hrytsyak, Leader of the Norilsk Uprising 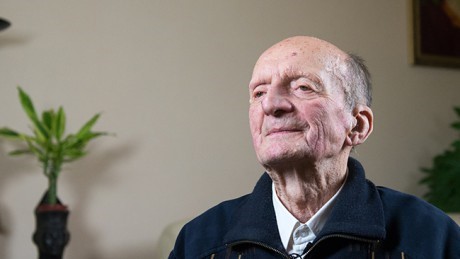 Yevhen Hrytsyak, one of the leaders of the 1953 Norilsk Uprising, has died at the age of 90. In his message on the news, President Petro Poroshenko spoke both of deep sorrow at his passing and of “profound gratitude for his example of an unbreakable spirit and will to fight for freedom”.

Yevhen Hrytsyak was born in the Ivano-Frankivsk oblast in 1926.  During the period of Nazi occupation, as a student at a trade college, he joined a youth section of the Organization of Ukrainian Nationalists [OUN] which was training young men to fight the Nazis.  He was mobilized into the Soviet Army in 1944, and served in the Fourth Ukrainian Front, for which he received several military awards.

He was, nonetheless, arrested in 1949 because of his brief involvement at the age of 16 and 17 in OUN, and sentenced to 25 years’ labour camp.  He was held in various political labour camps, including Norilsk, where some 70% of the prisoners were from Ukraine.

It was at the Norilsk Labour Camp in May 1953 that one of the main uprisings in the GULAG began.  Hrytsyak led the revolt in one of the blocks against the brutality and appalling conditions.  The prisoners demanded an end to summary executions; a shortening of the working day to 8 hours; the right to correspond with their families; the transfer of disabled prisoners; and numerous other similar demands.  Hrytsyak was one of the people who presented the demands to a commission which arrived from Moscow after the prisoners held firm and refused to give in.  Only a very small number of demands were met, while the prison authorities also resorted to provocation, and the uprising continued.  It was finally brutally crushed, but only in August 1953, after the prisoners had held out for 69 days.

Hrytsyak himself was sent first to the Norilsk and then Vladimir prison, where conditions were even worse.

He was released in 1956, following a decision of the Supreme Soviet Presidium, but was then arrested again in January 1958, with the same Supreme Soviet having decided that he should not have been released “due to the seriousness of the crime”.

Hrytsyak demanded to know what this supposed crime had consisted of, but was simply told that he had been arrested on good grounds. In 1961, he wrote a letter of protest to the Communist Central Committee over the repressive measures he was being subjected to because of his role as one of the leaders of the Norilsk Uprising.  He explained the conditions and treatment prisoners had received.

He was finally released in 1964 and returned to his home village.  He married and had one daughter.

He continued to face harassment and restrictions on his activities, with this never stopping him from signing documents in defence of victims of persecution and human rights.

His troubles escalated after he wrote a book about the uprising.  His letter to Leonid Brezhnev in 1981 following the harassment is well-worth quoting in full.

An open letter regarding our equal rights

“”Who’s this ‘comrade’?” you will involuntarily be asking yourself when you read this.

That is quite natural, since after all I would also be more inclined to call myself your opposite, rather than a comrade, since our comradeship is purely formal, not real.

And that began back then when you headed the political department of the 4th Ukrainian Front, and I was one of 265 men of a separate penal unit of that same Front, “expiating my first wrong-doing against my country”.

As you see, our life paths did not coincide even back then, and after the War and military service, they became even further apart. You took the path of serving your country at the highest and most responsible Party-state positions, while I – “further expiation of my sins against my country” in the so-called “corrective labour camps”. You were honoured by your country with gold medals and the highest powers, I with a camp number sign and deprivation of all rights. Your path was wide and bright, mine – narrow and without light.

However, each person before their path comes to an end (whatever that path was) wishes to look back, remember the most important stages, and if there is such an opportunity, to record them in writing. We have both done this. You wrote a trilogy of books of memoirs known throughout the world, in which you recorded the main stages of your bright path, and I wrote a work hardly known at all, entitled ‘A brief account of the Norilsk Uprising' in which I recorded only one stage of my gloomy path, but the one I believe was the most important.

And although we wrote our memoirs from quite opposite positions and at different levels, we are nonetheless united in having written the pure truth about one and the same, Soviet, reality. In other words, we described two different aspects of one and the same coin. And since we wrote in the same genre, I was bold enough to name you my fellow writer.

Third, and in legal terms, most important, our comradeship is based on our single Soviet citizenship.

However here I must note that I was not born in the Soviet Union, and I received Soviet citizenship against my will. Therefore, though in fact not only therefore, I have twice made official applications to the relevant bodies of the Soviet regime asking for permission for myself and my family to emigrate from the USSR.

However I received a categorical refusal and therefore still remain a Soviet citizen.

And despite all of this, it is still a pleasure for me to note that all citizens of the Soviet Union are equal before the law, while it is at once hard for me to have to acknowledge that the Soviet authorities do not always comply with this. And when it is possible to not observe, or to bypass a law, this means that there isn’t one!

I would use the example of you and myself. We both have equal rights as citizens of the Soviet Union and we have both written our memoirs.  You wrote about the road you took, I about mine. We both described what we saw, what we experienced, and what has most indelibly stayed in our mind.

You have published your memoirs in the Soviet Union and abroad, I – only abroad. However you are not summoned, as I am, to the KGB, and not asked in what way you sent your memoirs abroad, you are not asked to renounce your work.  You are not threatened with a court trial. They don’t set provocation forces on you. On the contrary, you are praised and spoken about with admiration.

I would now like to ask you why it is somehow ending up that two identical actions by two equal citizens are so differently assessed.  Why are you, Comrade Brezhnev, having signed the Final Act of the Helsinki Accords, in which, among other things, it is stated that citizens of all signatory states of the Accords have the right to receive and circulate information unlimited by state borders, using this right, while I am threatened with a court trial by the bodies of state security?

Here is an example: at one stage I had a visit to my home in the village of Ustya from an officer of the investigation unit of the Ivano-Frankivsk Department of the KGB, Major Petrenko, who says to me: “Well, Yevhen Stepanovych, I’m sure you thought that we had gone quiet and that you were off the hook?  No, you’re mistaken, you’re not off the hook. We already have the necessary proof: we already have your book, published in the USA. Our style experts have established that it’s your style. It was stupid of you not to want to give us a copy of the manuscript fearing that it could be used against you, as material evidence. We already have your manuscript, well, and you have a typewriter, it won’t be hard to check..  That’s all. And maybe,” he continues, “you’re counting on people in the West making a fuss about you … and that for that reason we won’t touch you?”  Here too, you’re wrong. We now have two main headaches for the world – that’s Afghanistan and Poland, and we won’t draw attention over such small fry as you”.

I have never renounced my memoirs, on the contrary, I have always said: “Yes, I wrote them and I myself gave them for publication. They were published with my knowledge and consent”.

Therefore, all the “proof” that Major Petrenko listed, I consider to be entirely redundant, and of absolutely no interest. I would like to know something else entirely. Why are they planning to try me?  After all, nobody is trying you!

Yevhen Hrytsyak can be heard here (in Ukrainian) speaking about the Norilsk Uprising and much more  https://youtube.com/watch?v=WugSjjNfElE