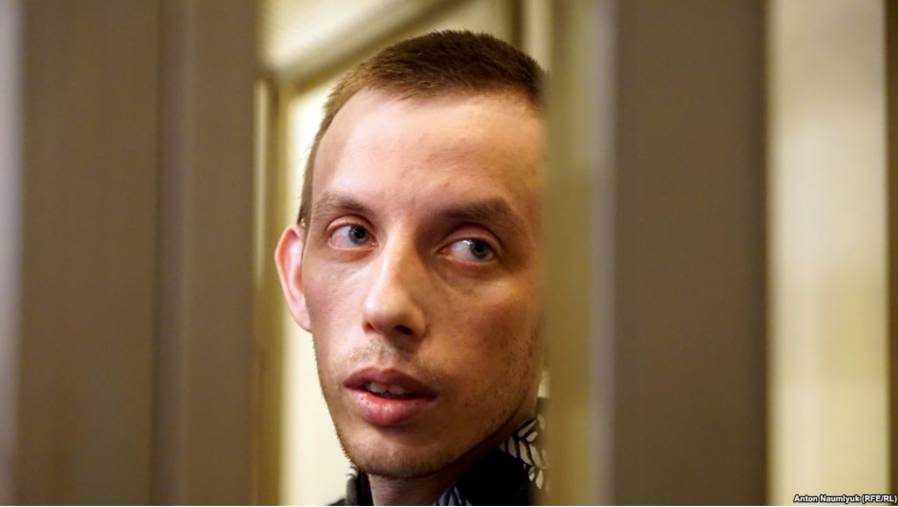 Russia’s prosecutor has lodged an appeal against the recent 12-year sentence passed on Crimean Tatar Ruslan Zeytullaev for unproven involvement in the Hizb ut-Tahrir movement which is legal in Ukraine and most countries.  It seems that the FSB [Russian security service] are determined to get the 17-year sentence they need for their paperwork, however many ‘trials’ are required.  Meanwhile the 31-year-old father of three is again on hunger strike in protest at the 12-year sentence and ongoing persecution of Crimean Tatars.

Russia has never provided any evidence to back its ban on Hizb ut-Tahrir as ‘terrorist’ and the court was also given no proof that Zeytullaev and three other Crimean Muslims from Sevastopol: Nuri Primov; Ferat Saifullaev and Rustem Vaitov, were members of the organization.  Russian courts in such cases will not acquit defendants, regardless of how clear their innocence is.  The judge did, however, in September 2016 sentence the other three men to the minimum possible sentence for ‘involvement’ and reduced the charge against Zeytullaev from ‘organizing’ a Hizb ut-Tahrir group, to involvement in it.  Zeytullaev was sentenced to 7 years, rather than the 17 years demanded by the prosecution.

This, however, did not suit the FSB which has a standard format for its multiple ‘Hizb ut-Tahrir cases’.  One person is always designated the ‘organizer’.  Emil Kurbedinov, Zeytullaev’s lawyer, warned shortly after the sentence was challenged as too ‘light’ that the FSB would not tolerate deviation from their storyline.  Too many questions were raised about their ‘case’.  If there was no leader on this occasion, what would they do about the other three men facing even longer sentences as the supposed organizers of other Hizb ut-Tahrir groups?

The Supreme Court obliged on Dec 27, 2016 by ignoring the lack of any grounds and overturning the original verdict.

The ‘re-run’ was as flawed as the original ‘trial’, with no new evidence, and the same witnesses, many of whom retracted their testimony in court and even repeated that they had signed the paper demanded of them after being warned that otherwise they would also face arrest.

The main prosecution witness was a former SBU officer, who betrayed his oath to Ukraine and now works for the Russian FSB.  He is known to have had personal reasons for a vendetta against Zeytullaev and Saifullaev.

Other than him, there was an obviously anti-Muslim ‘expert’ and a supposed secret witness.  The latter testified under highly irregular conditions, with even his voice distorted, and long silences before he answered questions, almost certainly while he consulted with the FSB as to what to say.  His testimony even so was equally confused and contradictory.

This was still less than the 17 years which the prosecutor had again demanded, and this new sentence has been challenged in Russia’s Supreme Court.  It is apparently asserted that “a lighter sentence than that envisaged for the given crime is possible only where there are exceptional circumstances”.  The prosecutor claimed that there are none.

This is knowingly false.  There are multiple circumstances which in fact prompted the Memorial Human Rights Centre to declare all four Crimean Tatars political prisoners long before the trial ended.

The prosecutor, doubtless serving the FSB, wants Zeytullaev to serve a further 14 years before returning to his family essentially to meet a quota – one that destroys lives, while providing those enforcement officers who carry out the work with likely promotion or bonuses.

PLEASE ALSO contact politicians in your country, Amnesty International and other human rights organizations.  Failure by the international community to react will send a dangerous message to Russia that it can invade another country’s territory and impose rule of terror with impunity.