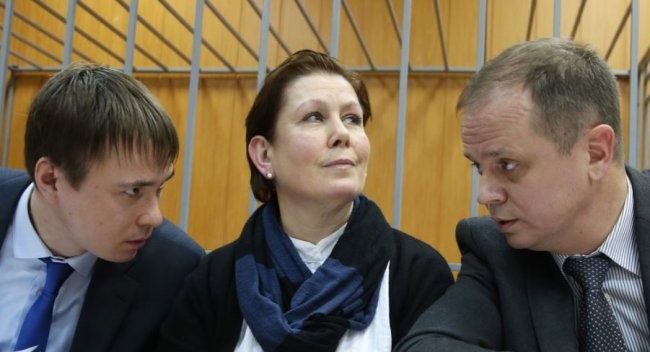 It was a trial that should never have taken place, but the sentence demanded for Natalya Sharina, former Director of the Ukrainian Literature Library in Moscow, on May 29 still came as a surprise.  You can hardly call the proposed 5-year suspended sentence and massive fine on a librarian accused of ‘incitement’ over the content of material in her library good news, but it could have been much worse.  Since Sharina has been held under extremely strict house arrest since October 28, 2015, it seems likely that a long sentence was envisaged, and that the prosecutor is obeying a decision from above to back down on this extraordinary case.  If that is the case, then the judge will presumably pass such a sentence, rather than the feared real prison term of up to 10 years, on June 1.

The indictment against 59-year-old Sharina includes two separate charges, however the second only emerged 5 months after her initial arrest under Russia’s legislation on ‘extremism’.

The renowned Memorial Human Rights Centre declared Sharina a political prisoner within weeks of her arrest and linked the prosecution with “the anti-Ukrainian campaign continuing since Spring 2014 in the state-run media and in utterances made by public officials holding high posts in the Russian Federation’s leadership”.  Memorial HRC further condemned any criminal prosecution of a librarian over material (allegedly) held in the library.

Sharina was arrested on Oct 28, 2015, following armed searches of her home, the Ukrainian Literature Library, as well as the home of Valery Semenenko, Head of the Association of Ukrainians of Russia.

The librarian, who is herself Russian, was accused of ‘inciting national enmity or hatred, as well as of denigrating human dignity of a group of people on the grounds of nationality [i.e. Russians]”.

The Investigative Committee claimed that from 2011-2015, Sharina, in her capacity as Director of the Library, had “distributed among visitors books by Dmytro Korchynsky designated by the court as extremist material and prohibited for use”.  Printed matter was also allegedly removed which was claimed to contain “calls to anti-Russian state and anti-Russian propaganda”.

Both Sharina and her colleagues believe that the one book by Korchynsky which was ’found’ was planted by the officers.  The book in question had been removed during a search of the library in 2010 and had not been returned.

Since then, however, the prosecution has claimed that Sharina was guilty of incitement to enmity with the use of her official position (Article 282 § 2 of the Russian criminal code) for 25 books or other material removed during the original search of the library.  Only the one book by Korchynsky was on Russia’s huge list of prohibited books.

The prosecution’s ‘expert’ Yevgeny Tarasov found ‘extremism’ in 25 of the 150 items removed, including children’s journals.  He noted, for example, criticism of the USSR’s actions with respect to Ukraine in some of the periodical journals and found extremism in the use of negative adjectives describing bodies of Soviet power and the actions of the Soviet regime (‘Russian imperialism’, ‘Soviet occupation’, and others).  He also found 3 issues of the children’s journalist Barvinok to be extremist.  In one of them, there was a story in which “the war in Ukraine is presented as a war between Ukraine and Russia which does not correspond with the facts ….”

The supposed ‘anti-Russian extremism’ was the only charge used at the time of Sharina’s arrest and the attempt by the prosecutor to have her reminded in custody.  Sharina was very fortunate to be represented by Ivan Pavlov and Yevgeny Smirnov, who succeeded in avoiding the direct custody then demanded by the prosecutor. Sharina was instead placed under house arrest which has been total ever since, and is now the subject of an application to the European Court of Human Rights.

Sharina’s treatment in custody for the first two days was extremely bad, and it has now transpired that the day after her arrest she received a serious spinal injury while being transported to the court.  She was on a bench in the back of a police van when the driver drove without applying his brakes into a ‘sleeping policeman’, causing Sharina to fall backwards.

The ‘extremism’ charges against Sharina are fundamentally flawed, which the defence has consistently demonstrated.  There needs to be proof of intent to incitement.  Not only is there no such evidence, but the prosecution has never even tried to define this supposed intent or Sharina’s motive.  The case had earlier been returned to the prosecutor several times, without this in any way clarifying the situation.

A second charge was laid in early April 2016, probably because the extremism case was going so badly.  Sharina was charged under Article 160 (§ 3 & 4) over alleged “unwarranted payment of lawyers’ services from state funds and fictitious employment of two legal consultants.”  She is accused of having paid the lawyer representing her over previous charges laid in 2011 but later basically dropped, from state funds.  There are no grounds for the charges and Pavlov has pointed out that the fees in question were agreed with the Moscow Department of Culture.

Unfortunately, however, the person employed since January 2016 as Acting Director, Natalya Vidineyeva is going along with the prosecution and claiming that she / the library are aggrieved parties and claiming over 2 million roubles ‘damages’.

It is a sad irony that Sharina, a Russian national, was initially taken on for her post as somebody seen as politically reliable and not Ukrainian.  The previous search in 2010 led to a criminal investigation in 2011 which kept being terminated, then reopened.  There has never been any clarity as to its current status, and Pavlov believes that a conviction could result in the old ‘extremism’ charges being dredged up.

It is difficult to take charges seriously that were laid so many months after a person’s imprisonment on different charges which lack all the elements of a crime even required by Russian legislation.

The prosecutor has now demanded five years suspended sentence on both charges with a probation period of five years.  An incredible 2.1 million rouble fine is also proposed as ‘compensation’ for the damages supposedly inflicted on the library.

The trial of Sharina arose and is mainly over material in a library. It is absurd to accuse a librarian of ‘incitement’ for books held in the library, especially since the law on libraries obliges librarians to hold all material which reaches the library.  Sharina was, in short, carrying out her professional duties and became, as Memorial suggests, one of the victims of Russia’s real and information war against Ukraine.