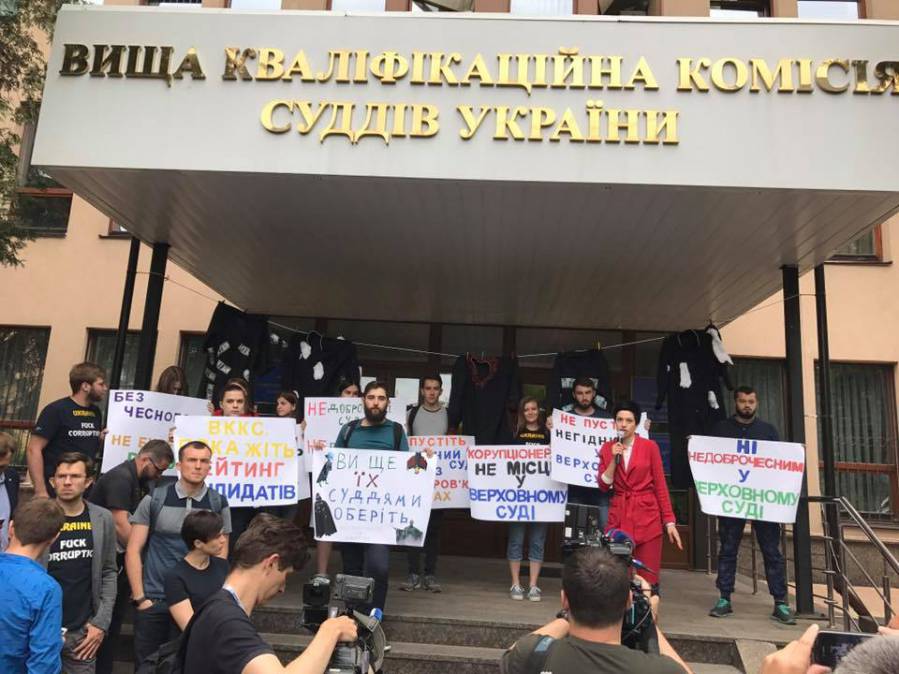 Ukraine’s first competition for Supreme Court judges is coming to a close, and, as feared, the selection commission has already overridden the Public Integrity Council’s very serious objections to a number of candidates, including one of the judges who sentenced Volodymyr Panasenko to life for a crime he almost certainly did not commit.  Perhaps that was the reason for an inept attempt on Tuesday morning to discredit the Council which is made up of representatives of civil society, whose only interest is to see the best candidates appointed.

There were plenty of real civic activists outside the High Qualification Commission of Judges building on Tuesday, there to impress upon the Commission how important it is to choose candidates of the highest calibre and integrity.  According to Natalya Sokolenko, a journalist and member of the Public Integrity Council, there were also people of a specific build and appearance who she suggests were ‘titushki’, or paid thugs, there to discredit the Council.

It soon became clear why such an ‘act of provocation’, as Sokolenko called it, had been needed on June 6.  This marked the beginning of the Commission’s plenary sessions where they are voting on whether to accept the Public Integrity Council’s negative assessments of 103 of the 382 candidates competing for 120 Supreme Court judge posts.

The Commission had, of course, been aware of these assessments earlier, yet during the interview stage only rejected 15% of the total about whom the Council expressed grave misgivings.

There has been wide publicity of the reasons for the Council’s negative conclusions, and the rules of the competition dictate that the Council can only be overridden by a two-thirds majority vote.  The vote is, however, secret, and judging by the first day of the session, members of the High Qualification Commission are not too worried about the scandal.

Three candidates, at least, were allowed to continue in the competition despite damning assessments:  Volodymyr Aleinikov, judge of the Central District Court in Mykolaiv; Oleksiy Bryntsev, judge of the Kharkiv Regional Economic Court; and Stanislav Holubytsky, from the Lviv Regional Court of Appeal.

With respect to Aleinikov, the Council had pointed to contemptuous behaviour towards journalists and members of the public during a court hearing and to his heavy reduction of the sentence passed on a police officer for beating up two young men.

Bryntsev had failed to reveal close family ties, especially to a judge of the Constitutional Court and to the Kharkiv Regional Prosecutor’s Office. He also had assets far in excess of his officially declared earnings.

The most baffling is, however, the Commission members’ vote on Stanislav Holubytsky.  The Public Integrity Council had issued a negative assessment on the basis of the judge’s role in one court trial, with this giving “grounds for concluding that the Candidate does not meet the criteria for integrity and professional ethics”.

Panasenko remains in prison to this day, although nobody seems to have ever believed he was guilty.  Adoption of a draft bill now in parliament will almost certainly result in a judicial review finding Panasenko to have been the victim of a terrible miscarriage of justice.

The Public Integrity Council wrote that it could not ignore the public reaction to the Panasenko case and the influence that it had had on public confidence in the judiciary.  While Holubytsky was not the presiding judge, he could have used his right to express a dissenting opinion, and did not.

Holubytsky can now hope for a post in Ukraine’s Supreme Court.

This law is urgently needed, and the fact that parliamentarians are still procrastinating forces the suspicion that they or the Prosecutor General’s Office are seeking to protect those in the law enforcement bodies and the courts who helped convict innocent men.