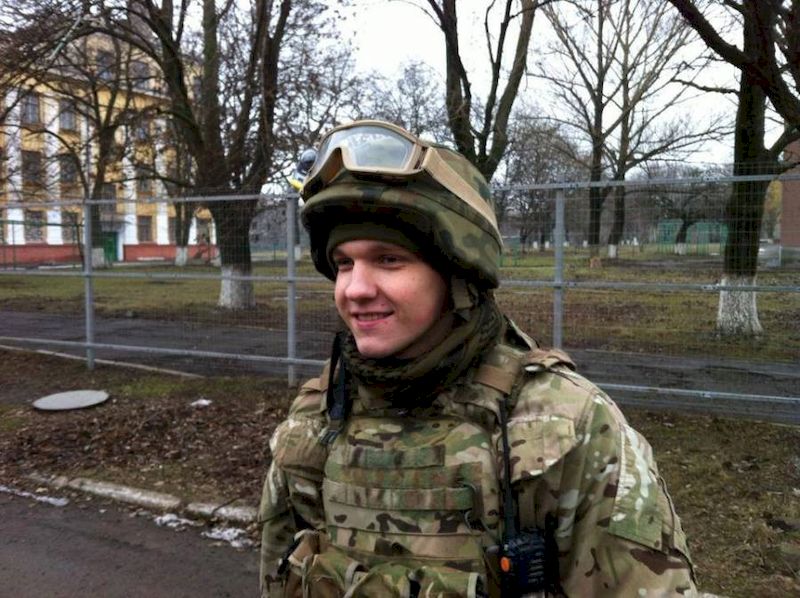 Russia’s Investigative Committee and courts have developed their own, specific, definition of mercenary, and it is only very loosely connected with money.  Artem Shirobokov is the first Russian to have been convicted of ‘taking part in an armed conflict as a mercenary’ and sentenced to five years’ imprisonment.  There is nothing to suggest that he was paid for his actions, unlike many other Russians who are known to have received remuneration, yet there is one crucial difference: Shirobokov was defending Ukraine, not fighting on the side of the Kremlin-backed militants in Donbas.

The court in the Russian city of Samara tried and, on June 7, 2017, sentenced Shirobokov in his absence.  Once the ruling comes into force (and the young Russian is not in a position to appeal against it), Shirobokov will face arrest if he enters Russia.

The regional FSB reported that a judicial precedent had been created “of the sentencing in absentia of a Russian citizen taking part in the armed conflict as a mercenary on Ukrainian territory”.

There is nothing to suggest that the prosecution tried to prove that Shirobokov had acted as a mercenary, and everything about the young man’s background points to the opposite being the case.   After learning of the criminal proceedings, Shirobokov said that Russia was yet again demonstrating its hypocrisy since those Russians who fight on the side of the so-called ‘Donetsk people’s republic’ [DPR] aren’t put on trial under this article of the criminal code. The same hypocrisy is seen, he says, in the way Russia treats separatism within its own borders, as opposed to in Ukraine.

Shirobokov first arrived in Ukraine in February 2014 and took part in Euromaidan.  He was involved in the far-right organization ‘Patriot of Ukraine’ whose leader Andriy Biletsky was one of the first to form a volunteer battalion in response to the Russian-led conflict in Donbas.  Shirobokov says that they suggested he join the battalion and that he agreed.  He was with Azov for two years, and says he took part in all its undertakings, and was involved in battles at Mariupol, Ilovaisk and others. He now works as a designer in the Azov Civic Corps.

Back in March this year, when asked by a journalist why he had come, he answered:  “I’m a Russian nationalist.  I feel an inner solidarity with the Ukrainian people, and I considered, and still consider Yanukovych to have been a criminal protégé of [Russian President Vladimir] Putin.  I spoke out against Putin back in Russia, but unfortunately there are no ways of protesting against the regime.  Everything is nipped in the bud, any opposition. I decided to come to Ukraine, to support it against Yanukovych and I stayed after that.”

During that interview, Shirobokov described his difficulties trying to get Ukrainian citizenship and said that he feared that the Ukrainian authorities could hand him over to Russia.  Thankfully, he now has a residence permit, but speaking with the BBC Russian Service after the ‘sentence’ was announced, he noted bitterly that the promises made by Ukrainian President Petro Poroshenko to initiate procedure whereby volunteers from Russia could get Ukrainian citizenship have not been kept.

Russia has claimed, falsely, that the young man was a member of ‘Right Sector’, an organization which Moscow has demonized since Euromaidan and which has the advantage in this case of being banned in Russia.

In fact, though, Russia could not try the young man for his ideological views or voluntary participation, since Moscow’s refrain for the past three years has been that the Russian military and mercenaries are not involved, only ‘volunteers’, heeding “a call of the heart”, as Putin worded it.

The investigators claimed that Shirobokov had received payment. It is possible that all reports then jump to shocking assertion in order to deflect attention from the lack of any evidence.  The court ruling alleges that he and other Azov members had deliberately shot at DPR supporters and carried out targeted shooting.

Why, Shirobokov rightly asks, was the sentence not much harsher if there were such war crimes?

He denies the claims Russia is making that he is some kind of far-right extremist, and says that this is also manipulation.  He took part in various opposition protests in Russia, but was not part of any organization.   He asserts that anybody who disagrees with the regime gets labelled a far-right fascist or Nazi.

This may not fully explain why he ended up in Patriot of Ukraine, and then Azov, whose leaders, at least, are known for their far-right views.  He stresses, however, that “nationalism is not equivalent to fascism”.

Shirobokov is the first Russian to be convicted, but the Investigative Committee has already initiated at least one other criminal investigation, also in connection with somebody fighting on Ukraine’s side.

It has ignored compelling evidence of war crimes committed by former Russian military intelligence officer Igor Girkin; neo-Nazi sadists Alexei Milchakov and Yan Petrovsky and many others.  A St Petersburg lawyer even publicly demanded a criminal investigation into likely war crimes committed by Girkin following one of the latter's many very open interviews.  The demand was ignored, and in the case of Milchakov and Petrovsky, both have taken part in training camps for fighters in Donbas, linked with an organization almost certainly receiving Kremlin funding.  Milchakov has also spoken openly about the money he and his comrades receive for their killing services in Donbas.

In December 2016, Dmitry Utkin, otherwise known as ’Wagner’, whose highly trained Russian fighters are known to have been involved in Russia’s invasion of Crimea, in the conflict in Donbas and in Syria, was one of Putin’s guests at a Kremlin reception to mark ’Heroes of the Fatherland Day’​

There is also plenty of evidence, including testimony from soldiers or their families, that Russian soldiers are paid extra to fight in Donbas (See: Russian Soldiers Sent to Ukraine Tracked by Hypermarkets and Unmarked Graves).  Soldiers have ended up in prison for refusing to go to Ukraine.

Russia’s view as to who are mercenaries, and who heroes, is not shared by other countries.  Both Britain and Latvia are currently trying their own citizens for fighting against the Ukrainian government in Donbas, with the United Kingdom bringing terrorism charges against Ben Stimson.