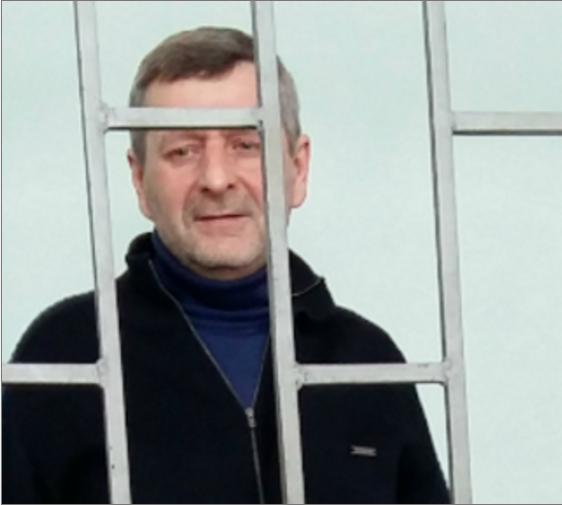 There appear to be no depths that Russia and its court lackeys will not stoop to.  Crimean Tatar Mejlis leader and recognized political prisoner Akhtem Chiygoz has been refused permission to see his mother who is critically ill, and has not seen her son for two years.

Chiygoz has been in detention since January 2015, facing legally nihilistic charges concerning a demonstration over which Russia has no jurisdiction.   Although the outcome is predetermined, the ‘trial’ is in such flagrant breach of fundamental principles of law and Russia’s own legislation that it probably suits Moscow for it to drag on. This delays the inevitable judgement in Chiygoz’s favour from the European Court of Human Rights, while Russia sees no problem with simply jailing the Crimean Tatar leader without any conviction.

52-year-old Chiygoz has not been allowed out of the SIZO or remand prison for almost a year, following the lawless decision to prevent him from attending the court hearings in his own ‘trial’.   His lawyer Nikolai Polozov explains that Chiygoz’s family had tried to conceal his elderly mother’s illness as long as they could, however Aliye Abduraimovna’s condition has sharply worsened, and doctors say that no treatment is possible, only palliative care.

It is therefore imperative that Akhtem Chiygoz be allowed to see his mother, probably for the last time.  This is so clear that even the gap in Russian legislation of a norm regulating such visits while a person is in detention should not have caused a problem.

The defence prepared an application which was ‘considered’ by presiding judge Viktor Zinkov, together with judges Igor Kryuchkov and Alexei Kozyrev on June 7.  Remember their names, together with that of ‘prosecutor’ Anastasia Supryaga, who opposed the application.

They then started trying to pull holes in the medical documents.

Although that had not worked, and they could not deny that Chiygoz’s mother is critically ill and bedridden, they simply turned down the application for Chiygoz to be allowed, under police convoy, to briefly see her.  Polozov notes that Zinkov showed particularly foul cynicism in claiming that there was nothing to stop his mother coming to the SIZO “if she so wants to see her son”.

There are no words for this new outrage, however everything about the trial of Akhtem Chiygoz, Ali Asanov, Mustafa Degermendzhy and several other Crimean Tatars reeks of the wish for revenge and of open discrimination, since only Crimean Tatars have been targeted.

On Feb 26, 2014, the Crimean Tatar Mejlis [representative assembly] called on all Ukrainians to come to the Crimean parliament to block a Russian-backed plan to force through an illegal change in Crimea’s status.  There were around 10 thousand from the pro-Ukrainian side,  and about half that number of pro-Russian demonstrators.  The latter began gathering hours before their demonstration was scheduled, and the situation was fraught.  It was never, however a riot, and the hours of available video footage shows very clearly that Chiygoz and other Mejlis leaders played a major role in preventing confrontation.

There are compelling grounds for thinking that this demonstration prevented Russia from claiming Crimea had voluntarily chosen to be annexed. Russian soldiers seized control early the following morning (see:  Kremlin Takes Revenge on Crimean Tatars for Foiling Covert Annexation Plans).

Persecution, first of individual Mejlis leaders, and then of the Mejlis itself began within months of Russia’s invasion.  The ‘criminal investigation’ over the February 26, 2014 demonstration began 10 months later and Chiygoz was arrested on Jan 29, 2015.

The charges are surreal, since even had this been a mass riot, it happened on Ukrainian territory under Ukrainian law.  Russia’s own criminal code prohibits criminal prosecution in such cases.

Only Crimean Tatars are targeted, although pro-Russian demonstrators were present, and the two deaths that day were in fact on their side of the demonstration.

There is no evidence of Chiygoz having done anything that day but work to calm hotheads.  There is plenty of footage, on the other hand, of pro-Russian paramilitaries, Cossacks, etc. actively trying to provoke trouble or deliberately cause crushes.  Here, for example, https://youtu.be/YOth05NskSo  a pro-Ukrainian demonstrator has become unwell as a result of such crushing.  The occupation authorities have, of course, made no effort to identify this person.

It is typical of the squalid pretence behind this trial that the defence’s recent application to have Refat Chubarov, who as leader of the Mejlis did organize the demonstration, called as witness, was rejected (details here).

In its statement on Feb 15, 2016 declaring Chiygoz, Asanov and Degermendzhy political prisoners, the Russian Memorial Human Rights Centre pointed to the clear lack of jurisdiction and dismissed the formal excuse presented that two of the alleged ‘victims’ are Russian nationals.  Neither had sought medical treatment at the time, and Memorial noted that both in their cases, as in those of over half the alleged ‘victims’, there were serious doubts as to the authenticity of any injuries.  They pointed out also that the fact that only Crimean Tatars had been targeted was an indication of the political motives behind the prosecution.

Since then, Chiygoz has been prevented from even taking part in his own ‘trial’, and he is now being stopped from visiting his incurably ill mother.

Please contact politicians in your country, drawing attention to this appalling case.  You could also try to contact Russia’s Human Rights Ombudsperson.