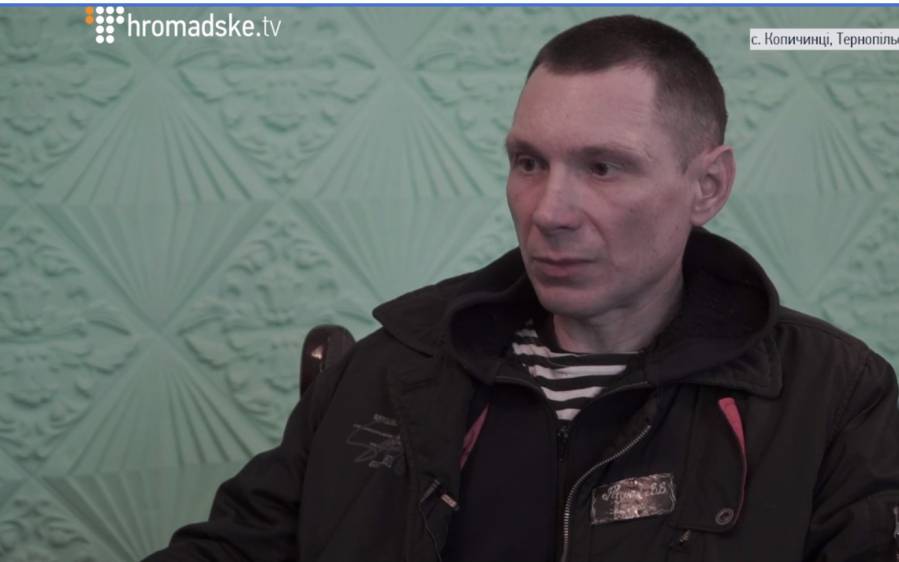 A Russian who was forced by the FSB to fight against the Ukrainian Army in Donbas and who surrendered voluntarily to Ukraine is now in danger of being extradited to Russia.  The supposed criminal charges against Vladimir Radyuk have almost certainly been concocted to secure the forced return of a person who can provide vital testimony about Russia’s military aggression in eastern Ukraine.  It defies comprehension that Ukraine’s authorities are abetting Russia in this.

Moscow has continued to deny any military involvement in eastern Ukraine, much as it initially denied that its soldiers had invaded Crimea.  Knowing that this is a lie is not enough in a court of law, and any testimony is of vital importance.  Russia is doubtless aware of this and has come up with a belated criminal charge to get Radyuk back on Russian territory.

There is plenty the 43-year-old from Omsk (Siberia) can reveal, placing him in obvious danger in Russia, and it is galling that Ukraine’s authorities are going along with Moscow’s demand for his extradition.  Radyuk, who is represented by human rights lawyers, has exhausted almost all legal avenues in Ukraine against his extradition, with a cassation appeal the last hope.

During his military service in the early 1990s, Radyuk became a specialist in portable air-defence systems.  This is not the kind of specialization that guarantees employment in civilian life, and Radyuk ended up in trouble with the law.  By 2014 he had been in prison twice, for theft and robbery.  He was still under police surveillance when he left Russian territory, with this alone making it unlikely that he was then facing criminal charges.

His account of events from May 2014 would assuredly be denied by the Russian FSB [Security Service], but his story adds up and explains his later actions, which cannot be said of the FSB’s version, nor of the Ukrainian Security Service [SBU] assumption that he is lying.

According to Radyuk, he received a visitation in May 2014 from two men who showed FSB identification.  They proposed that he undergo military training in the Rostov oblast.  There was mass war hysteria at the time, and Radyuk was under no illusions as to what this was about.  He recalls that Russian former military intelligence officer Igor Girkin, whose men had just seized control of Sloviansk, was complaining that he lacked ‘volunteers’ and that local residents weren’t willing to fight.

Radyuk asked if he could refuse, and says he understood from the response that he had better not try.

He spent around a month undergoing this military training at a Russian Emergencies Ministry training base in Rostov oblast which borders Donbas.  The instructors were professional military officers who were overseen by FSB men.  The trainers never revealed their real names or military rank, and each of the men being sent to Donbas received a nom de guerre.

There have been plenty of accounts, including those of Russian conscripts, corroborating the basic details of Radyuk’s account.  This gives it credibility while making the detail he is able to provide, including about the ‘ideological training’ they were subjected to, invaluable.

Radyuk was taken to Donbas in June, and recalls that his specialization was not needed since “Ukrainian aviation was almost not flying in the second half of June 2014”.  This too is important both because of the unrelenting propaganda claims about Ukrainian bombing and because Russia has tried to claim that the MH17 airliner was not downed on July 17, 2014 by a Russian BUK missile in militant-controlled territory, but by Ukrainian aviation.

Radyuk can also provide important details about what he calls the criminal nature of this undeclared war.  He says that for a long time his only experience of combat was a fight for share of stolen goodies between fighters from the so-called ‘Donetsk people’s republic’ [DPR] and some Cossacks.  It was clear to him that this was what the militants were about and he believes that the only discipline and fighting capacity came from Russian military servicemen.

He later served as one of the guards at the seized SBU building in Donetsk whose basement was used to hold and often torture hostages.  He says that he knows of numerous cases where civilians were tortured.

Earlier plans to flee were thwarted when he got sent to Donetsk Airport and came under shelling.  He was in hospital for several weeks and there began planning his escape.  He tried to persuade other Russian soldiers to join him, but they refused and said they wanted to see how the Ukrainian army treated Radyuk, before they followed suit.  They did provide important reasons for advising Radyuk to attempt his escape in the area around Debaltseve.  They believed that the active movement of armed forces and concentration of military technology suggested that Russia was planning a military operation on the eve of the Minsk Accords.  They thought he’d had more chance of not being noticed.

Radyuk’s testimony provides further confirmation of Russia’s major military engagement in the battle for Debaltseve which culminated in February 2015, days after Russian President Vladimir Putin agreed a ceasefire as part of the Minsk II Agreement on Feb 12, 2015.  There have been sundry pieces of evidence, such as a military award “for services to the Fatherland” given to Alexander Minakov for his part in that battle.  Investigative journalists believe that it was Putin who ordered the Debaltseve offensive.

Radyuk voluntarily surrendered on October 14, 2014.  He was treated well by the Ukrainian military commander who almost apologized for having to hand him over to the SBU.   If the Lviv commander’s behaviour totally vindicated Radyuk and should have convinced other Russian soldiers to follow his example, the same cannot be said of Ukraine’s SBU and the migration service.

While held in detention, the SBU made at least three attempts to get Radyuk to agree to be part of an exchange to secure the release of Ukrainian hostages. He refused each time and was sentenced in May 2015 to 3 years’ imprisonment (for involvement in an illegal armed formation and possession of arms).  He is seeking asylum in Ukraine where he wants to spend the rest of his life with the Ukrainian woman he met while serving his sentence.

Radyuk had opposed Russia’s war against Ukraine and was essentially given no possibility to refuse the FSB ‘recruitment’.  From April 2016, he publicly revealed details about Russian military involvement which Russia is denying, and has very good reason to fear for his physical safety if extradited to Russia.

Surely Ukraine’s authorities can understand how invaluable Radyuk’s testimony could prove, including at international courts at the Hague.  They should also consider the fatal message they would be sending other Russian soldiers if Radyuk’s refusal to continue fighting against Ukrainians resulted in him being sent to face Russian reprisals for that act of courage.