What Will Ukraine’s Next Big Reform Be? 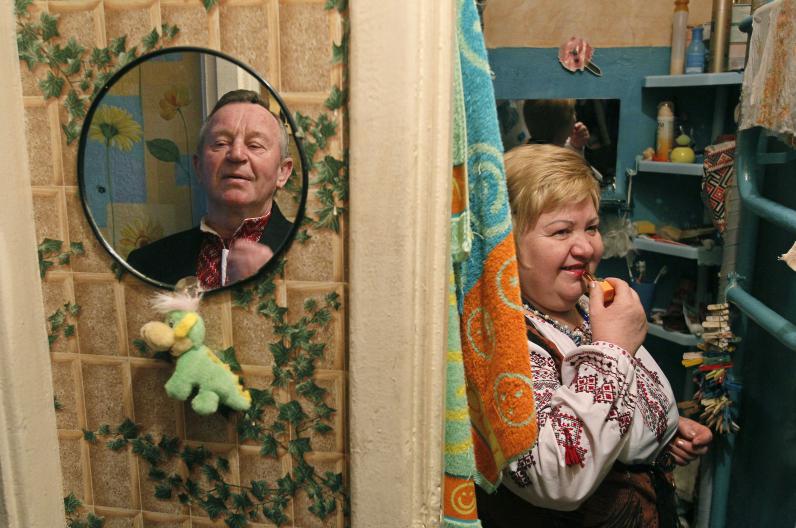 Mykola Milevsky (L), 75, and Natalia Stolyarenko, 58, stand in their apartment as they prepare to attend an amateur dance gathering in Kyiv February 24, 2013. The dance gathering for pensioners has taken place every Saturday and Sunday for about twenty years in an underpass near a city center metro station, where city authorities have allowed them to meet as they cannot afford to rent a location. For the gathering’s attendees, it is one of the few opportunities they have to meet and socialize. A few couples have met through the event and several have settled down to live with each other. Milevsky and Stolyarenko are one of such couples and have lived together for over 4 years. Picture taken February 24, 2013. REUTERS/Gleb Garanic

The IMF has told Ukraine that it must push through a number of reforms before it can receive any additional funds. Currently, the major effort is pension reform, something both the government and the IMF are focused on. Pensions account for 11 percent of GDP and 26 percent of public expenditures. Luckily, pension reform—unlike land and healthcare reform—has few vested stakes, and it has a good chance of passing.

Ukraine’s current pension system is a mandatory one based on the solidarity principle, in which workers pay for pensioners in anticipation of future generations eventually paying for them. Pensions are low, with most of them around the subsistence minimum (approximately $50 per month). Even at this level, the state pension fund had a deficit of over 6 percent of GDP in 2016. Deep and repeating banking crises, the lack of financial instruments rated above junk, a wall between households and world markets in the form of heavy capital controls—all of these force Ukrainians to rely on their children or their own cash savings to ensure their well-being after retirement.

The poor situation of pensions is explained by several factors. Although there are many more working-age Ukrainians than pensioners, the number of workers paying a social contribution tax approximately equals the number of retired people, because of exemptions (e.g., individual farmers who do not pay a social contribution tax but are eligible for pensions) and a huge shadow labor market that ranges from those who receive envelopes as an unofficial cash portion of their salary to those who have no official employment at all.

Additionally, the social contribution rate was brought down from about 40 percent to 22 percent in January 2016 by former Minister of Finance Natalie Jaresko’s business-friendly tax reforms. The pension fund’s deficit rose from 33 percent of its expenses in 2013 to 56 percent in 2016. And finally, the formal pension age in Ukraine—60 years for men and 57.5 years for women—is one of the lowest in Europe, and even lower for teachers, doctors, military, and workers with harmful labor conditions.

The IMF and the government want to increase the country’s pension age. The IMF has advocated for a formal pension age increase, which sounds reasonable, given the foreseen sharp increase in the share of old people in the next few decades and the decline in the workforce due to an extremely low birth rate in 1990-2000. Fiscally, it should mean less spending on pensions and more income from labor taxes. Economically, the effect from the pension age increase could also be huge: more people remaining in the workforce means greater economic growth.

The Ukrainian government, however, decided to raise the length of service requirements instead of the formal pension age. It should have a comparable impact on effective average pension age. As a result, pensions would become more dependent on official salaries and years of service. Workers would be financially motivated to take jobs in the formal economy, thus the share of shadow employment would shrink, with positive consequences for public finance. There is, however, a negative side as well: pensions as a percentage of individual earnings are expected to decline to as low as 30 percent. The IMF may or may not be happy with it, but the population will definitely be unhappy.

The second idea shared by both the IMF and the government is to optimize eligibility criteria and widen the tax base. Early retirement options would be narrowed, farmers and individual entrepreneurs would be required to pay a social contribution tax, and special pensions’ upper limit would be lowered. The main concern is the design of an early retirement scheme for those working in harmful jobs. The government has suggested a state-owned pension fund, but with the state having proved to be an ineffective manager in the pension funds sector (massive fraud in the central bank’s pension fund was uncovered several years ago), the idea of giving the government another attempt at assets management doesn’t seem wise.

The IMF and the government believe it premature to force all workers to participate in privately managed pension funds. Indeed, there is no proper financial market, there are only five stocks in the Ukrainian stock exchange index, there are few experienced asset managers in the country, and the rights of owners and investors are weakly protected. The danger here is that public opinion on this may be easily manipulated: half of the population cannot tell a stock from a bond, so the pros and cons of mandatory participation in private funds could be used by the opposition as another striking point alongside early retirement options and cuts in pension benefits.

Still, progress is definitely occurring. The Ukrainian government and the IMF agree on the major points. But the main battle will be in parliament, where the opposition will do its best to show off and secure its image as the people’s defenders, even two years ahead of scheduled elections.

Maria Repko is deputy director of the Kyiv-based Centre for Economic Strategy, and is the chief expert of the Financial Sector and Pension Reform Group at the Reanimation Package of Reforms coalition.