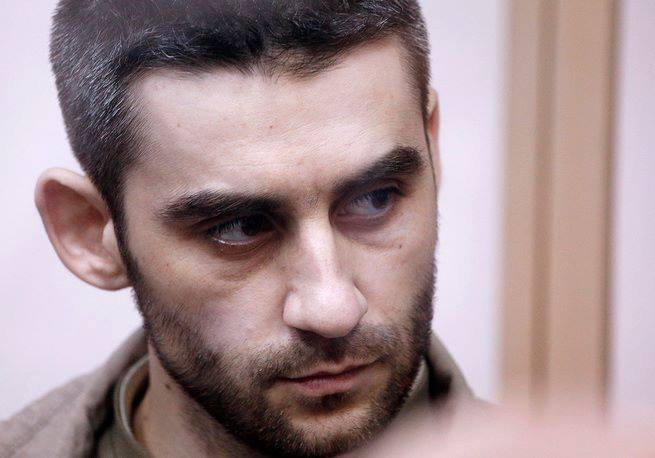 Ferat Saifullaev will be turning 34 on July 21, his third birthday in detention for his religious beliefs and political views.  Please write to him!

Russia is flouting a recent European Court of Human Rights judgement and holding Crimean Tatar Ferat Saifullaev over two and a half thousand kilometres from his wife and children in Crimea. This is only one of a multitude of violations, which his lawyer views as pressure on a recognized political prisoner.

Saifullaev’s wife reported a month ago that she had heard nothing from her husband for over a month.  This, it transpired, was because at the end of March, six weeks after arriving at this rather notorious prison, he had been placed in a punishment cell for 6 months.  The ‘offence’ – a sim card allegedly found during a search.  Even if it was genuinely found, and not deliberately planted, this was, lawyer Edem Semedlyaev points out, a minor infringement which in no way warranted the penalty.

Saifullaev is now due to be held in the punishment cell until September 28, with no calls to his wife and children allowed, and many other restrictions.  According to the local human rights monitors, there are plans after that to move him to harsher conditions, again for no obvious reason.

Semedlyaev saw Saifullaev on June 19, with the brief visit accompanied by numerous infringements, which he plans to lodge complaints over.  He was forced to wait five hours to be issued with a pass into the prison, with this claimed to be because ’checks’ needed to be carried out.  He had also formally notified the administration that he wished to transfer money into Saifullaev’s personal account.  Five hours later, he was told that the procedure had changed, and he could now only do this via a bank.  Semedlyaev asked why, in that case, had the woman who handed in an application at the same time as him, been allowed to.  The claim that this had been ‘an oversight’ was most unconvincing.

More importantly, Semedlyaev was prevented, in gross breach of legislation, from speaking with his client alone.  The fact that they had obtained a signature from Saifullaev giving his consent to a meeting in the presence of administration staff is immaterial, when they have all the levers needed to force him to agree.   He was also prevented from signing documents Semedlyaev had brought to authorize him to represent his client in international organizations.  The excuse that time was that the documents were in Ukrainian and English.

In effective confirmation that Saifullaev is being persecuted for his faith, he is also being prevented from reading the Koran.

Saifullaev is one of the first four Crimean Muslims whom Russia has illegally prosecuted on totally unproven charges of involvement in the peaceful Hizb ut-Tahrir movement which is legal in Ukraine and most other countries.  There is nothing at all to explain why Russia has declared the organization ‘terrorist’.

All four men – Saifullaev; Nuri Primov; Rustem Vaitov and Ruslan Zeytullaev – were declared political prisoners long before their ‘trial’ ended by the Memorial Human Rights Centre.  It is only a matter of time before the other 15 Crimean Muslims whom Russia is holding in indefinite custody are also given this status.

Saifullaev is not the only one of the four Sevastopol Muslims to be facing bad treatment.  By the end of March, Rustem Vaitov had spent 45 days of the past two months in a punishment cell, with the three 15-day sentences clearly due to his refusal to collaborate with the prison administration by spying and informing on other prisoners (details here).

Hizb ut-Tahrir is a peaceful organization whose members are not known to have committed any act of terrorism or violence anywhere in the world.

The only ‘evidence’ against Saifullaev and the other men came from a video in which the four men discussed the political situation in Crimea, before and after it came under Russian control.  The discussion was provoked and the video shot by a person recruited by the Russian FSB, and the defence considers that it should not have been allowed as evidence,

Aside from a former Ukrainian SBU officer with a known axe to grind against Zeytullaev and Saifullaev and now wanting to use the prosecution for promotion in the Russia FSB, the other witnesses almost all retracted testimony they had allegedly given earlier, or denied having said what was asserted of them. The FSB then pulled out a ‘secret witness’ who spoke with long hesitation from a separate room with the breaks clearly being used for somebody to prompt him on what to answer.  Even under such circumstances, his answers were confused and contradictory.

The case was so unconvincing that the judges at the Rostov Military Court threw out the charge of ‘organization’ in Zeytullaev’s case and sentenced all men to the minimum sentence. That did not suit the FSB and the sentence against Zeytullaev was challenged.  The second time around, after exactly the same ‘evidence’, a panel of judges proved more malleable and he was sentenced to 12 years.  The FSB still seems dissatisfied that it didn’t get the 17 years demanded, and may still succeed with that.  Courts in Russia provide the sentences demanded of them.

Ferat Saifullayev is an economist by profession, though had a construction job when arrested in April 2015.  He and his wife Elzara have three small children, two daughters and a son, who have not seen their father since then.

PLEASE WRITE TO FERAT AND THE OTHER MEN

FERAT is turning 34 on July 21 – Birthday cards should be sent well in advance!  It means a huge amount to know that people are aware of what you’re going through.