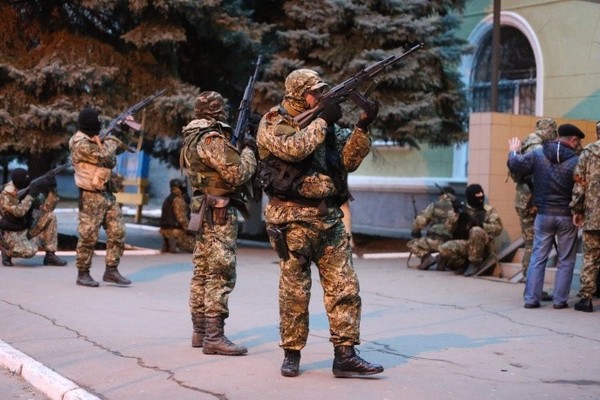 The Czech Republic has become the latest EU country to put its own citizen on trial over alleged involvement on the side of Kremlin-backed militants in the fighting in Donbas.  Russia, in contrast, has sentenced one Russian to 5 years’ imprisonment - for fighting (legally) for Ukraine

The Czech prosecutor’s office has imposed an information embargo, and the man’s name has not been revealed, however he is reported to be charged with involvement in planning a terrorist attack in Donbas.  This is an unprecedented trial for the Czech Republic, but it is not the first time that EU citizens are charged, nor is it the first mention of terrorism over action on the side of the militants of the so-called ‘Donetsk and Luhansk people’s republics’ [DPR, LPR, respectively].

Radio Svoboda has spoken with Ondřej Kundra from the weekly Respekt, who earlier wrote about the trial. He understands that the man on trial served earlier in the Czech Army, and had earlier lived in Donbas.

He is accused of either having taken part or joined military actions, although he ay not have directly participated himself.  The prosecution clearly thinks this is enough to bring charges.

The man himself denies any fighting in Donbas, and says that the photo showing him with a rifle in his hands are ‘by chance’, that he only wanted to look at military technology which he is interested in.

Kundra says that he is aware of other cases involving Czech citizens who have taken part in the fighting. Although the exact figure is unknown, he says that one is talking of dozens of Czechs and Slovaks fighting in Donbas.

The court needs to establish how the Czech citizen came to join Russian-backed formations in Donbas, and whether he was directly involved in “planning a terrorist attack”.

Since the man is denying involvement in the fighting, the court must decide how strong the evidence is of action which is in breach of Czech law.  According to Petr Medek from the Czech Defence Ministry, a Czech citizen may only serve in a foreign army with the consent of the Chief-in-Command of the armed forces, in this case, the Ukrainian President.

Involvement in militant armed groups is quite different, and reaction to this falls within the framework of the Czech Republic’s Criminal Code.

The Czech defendant is not alone in denying any involvement in fighting despite either suggesting the opposite, or demonstrating photos with military gear, reportedly, on social media.

This 26-year-old Latvian citizen faces a sentence of up to 10 years’ imprisonment if convicted by a Latvian court.  He also claims to have been in Donbas on a ‘humanitarian mission’.  A mission during which he received a serious head injury (more information here)

There has been one odd case, where Austria has sought the extradition from Poland of an Austrian citizen Ben Fischer.  It was never clear what the grounds were for the charges against the Austrian, but they were of possible war crimes, while Fischer was fighting in a Ukrainian volunteer battalion.  It was later reported that Fischer was released almost as soon as he was returned to Austria.

The main country where most of the fighters are from takes a very different approach.

One Russian has so far been ‘tried’ in absentia and sentenced to five years’ imprisonment for fighting against the Russian-backed militants in Donbas.  The Russian Investigative Committee tried to get around the inconvenient facts that Artem Shirobokov was not in breach of Ukrainian legislation, by claiming that he was a ‘mercenary’.  There is nothing to suggest that Shirobokov, who has been in Ukraine since he took part in Euromaidan, ever took money for his role in Donbas.  While this is possibly true of some of the militants from Russia, it does not appear to be the case in a very large percentage of the cases.  It is no accident that a lot of the fighters have been from Russian republics, like Dagestan, where this is widespread unemployment and poverty.

Alexei Milchakov, the neo-Nazi sadist from St. Petersburg, whose behaviour at home had made him notorious long before the war, has also spoken openly about the money he and his comrades receive for their killing services in Donbas. Both Milchakov and his neo-Nazi comrade Jan Petrovsky have taken part in training camps for fighters in Donbas, linked with an organization almost certainly receiving Kremlin funding.

Russia has caused consternation in militant ranks recently by its detention in occupied Crimea of Vadim Pogodin, a former militant fighter in DPR whom Ukraine wants to try to a number of grave crimes, including the killing of 16-year-old Stepan Chubenko.

Pogodin, however, is from Donetsk, and it suits Russia’s narrative to deflect attention from the Russian militants who have, from the outset, played the main role in initiating and perpetuating the conflict.  The Russians may be killed if they know too much (as some already have), but they will not be handed over to Ukraine under any circumstances.

This is despite compelling evidence of war crimes committed by former Russian military intelligence officer Igor Girkin; Milchakov and Petrovsky and many others.