Scandalous French ‘Masks of the Revolution’ film gets Russian ‘human rights’ awardFrench filmmaker adopts Putin’s ’Ukrainian fascist hordes’ line for Canal Plus"US guilty of genocide": Kremlin supports anti-Maidan festival with links to the German far rightOdesa 2 May Suspect: We were financed by MoscowVital Probe of Odesa May 2 Tragedy stymied because of questions answered?Movement at last on Odesa 2 May investigationRussia Today, or why Odesa May 2 is different from BaltimoreOdesa May 2 Investigation: A Failed Test for Ukrainian JusticeMore Evidence against Incendiary Lies about Odesa 2 MayContinuing Obstruction of Odessa May 2 InvestigationPropaganda that KillsOdessa May 2 trial turns into farce as Russia continues ‘massacre’ propagandaBad Start to Crucial Odessa May 2 TrialsRussia’s New Odessa FileOdesa "Massacre" Propaganda vs. the FactsDangerous silence over police role in Odessa May 2 eventsWithout Double StandardsWhat Russian TV won’t show about the events in OdessaCVU: Pro-Russian activists sold information about pro-Ukrainian activists in OdessaUHHRU condemns police role in Odessa tragedy
• Topics / Freedom of expression 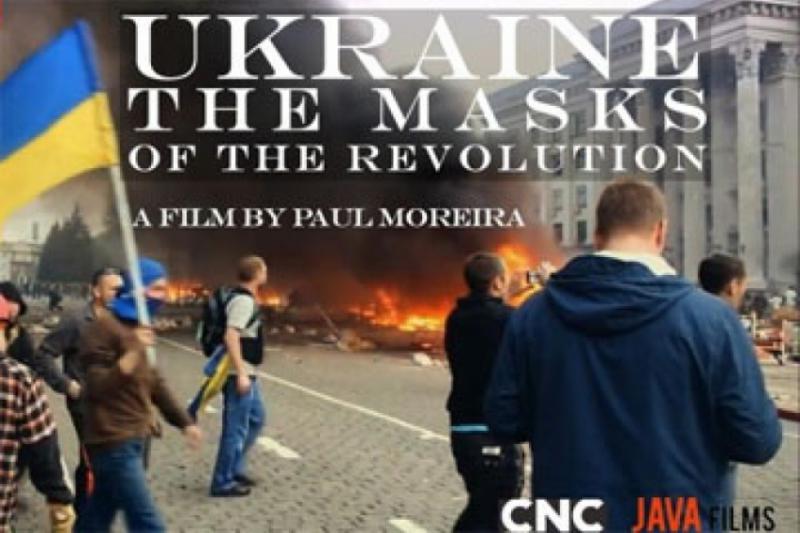 Paul Moreira, the author of a French film that falsely calls a tragic fire in Odesa a ‘massacre’ and presents an equally distorted picture of Euromaidan and Russia’s annexation of Crimea, has won a defamation suit against a freelance Ukrainian journalist.  The French court’s ruling is all the more baffling as Anna Chesanovska-Jaillard, who lives and works in France, pointed to the same manipulation of facts as many French journalists whose reports Moreira did not decide to claim were defamatory.

Moreira’s ‘Masks of the Revolution’ was first broadcast on France’s popular Canal Plus cable television channel on Feb 1 this year, and prompted widespread criticism. Among those particularly appalled by the film was Chesanovska, as her name had appeared on the credits.  She had been asked to translate two interviews, and was therefore uniquely placed to assess how Moreira used these interviews.   They were interviews with two far-right politicians – Ihor Mosiychuk and Andriy Biletsky, the former commander of the Azov Battalion.  She was aware of what the men had said during the full interviews, and believes that Moreira created a different impression by cutting bits out.

Chesanovska told the Ukrainian publication Glavkom that it was this that prompted her to write the article, “after all I was the only person who saw the real images, saw the interview without cuts and could compare what there was and what it became”.

This was exactly what she told the publication Liberation who posted her response ‘Ukraine: “the Masks of the Revolution” or Manipulative Montage’  In it, she asserts that Moreira took what he wanted, and omitted what did not fit the impression he was trying to create.  For example, Mosiychuk is quoted as talking of the notion of nation, of what is Ukrainian being “like a bond of blood and spirit between the dead, the living and those who are not yet born”.  Moreira cut out the words where Mosiychuk specifically stated that you do not need to have been born in Ukraine or have ‘Ukrainian blood’ to be a true Ukrainian.

Since Mosiychuk and Biletsky are presented as representatives of the far-right who, in Moreira’s rendition, were the main force of Euromaidan, such omissions are surely significant.

Moreira, however, saw sentences such as the following as defamatory: “Thanks to deft sleight of hand, with sentences cut, tragic music and images of violence, the two men whose interviews I had translated in their entirety, looked like savage creatures, obsessed by stupid and malignant nationalist ideas”.

A second article, published in the French Huffington Post a week later, on Feb 9, was entitled ‘French author of polemic film on Ukraine accused of plagiarism’.  In fact here the author largely reported others’ accusations.  Ukrainian producer Yulya Serdyukova has indeed accused Moreira of using scenes from her film ‘All things ablaze’ without seeking permission.

It is unclear how Moreira dared file a suit over the second article.  While the court accepted that accusations of plagiarism are defamatory, in this case it could hardly find Chesanovska guilty, and not merely because the journalist had only reported Serdyukova’s allegations.  It seems Moreira has himself acknowledged a ‘mistake’ and promised the shots will be removed in future showings of the film.

The court found that there had been defamation throughout the first article, for example, in the assertion that Moreira had consciously edited images and information to present his preconceived view about the supposedly leading role of the far right in Euromaidan and subsequent events.

Since the young journalist has not only been ordered to pay prohibitive damages (around 13 thousand Euro), but must also  publicly retract her statements, it is imperative that journalists and human rights groups become involved.  Chesanovska was exercising her right to freedom of speech and expressing views about a film that very many of us consider highly manipulative and misleading.  Are we to be forced into silence about gross inaccuracies and manipulative use of footage and interviews out of fear of being found guilty of defamation?

Moreira’s film and freedom of expression

There are legitimate limits to freedom of speech.  Defamation is certainly unacceptable, yet so too is misleading the public if no attempt is made to rectify incorrect information, nor even to obtain accurate information from the outset.

During the court hearing, Moreira stated that he had made his film after learning of what he called ‘the massacre in Odesa on May 2, 2014.  He said that he had been shocked at how this event had, in his words, been overlooked.

Disturbances initiated by an attack on a peaceful pro-Ukrainian procession by the Odesa Druzhyna, an anti-Maidan, pro-Russian movement whose members appear to have been paid from Moscow got out of hand.  In the street riots that followed, both sides used weapons, including the firearms that killed six people. While it is undisputed that pro-Ukrainian activists then set off for Kulikovo Pole to burn the anti-Maidan tents set up there, and that anti-Maidan activists barricaded themselves into the Trade Union building, the largely Russian-sponsored version of a ‘massacre’ has been rejected by the non-partisan 2 May Group, the UN Monitoring Mission, and by the Council of Europe’s International Advisory Panel [IAP]. All have agreed that with Molotov cocktails being thrown at and from the building, there is no way of ascertaining who caused the fire, which caused the death of 42 anti-Maidan activists.  All died either directly from the fire / smoke inhalation, or fell to their death jumping from the windows.  Details about Russia’s ongoing efforts to push its ‘massacre narrative’ can be found here. )

This is only one of three topics which Moreira gives misleading information about in his film, but it is a telling one, especially given the court’s acceptance that there was no proof that Moreira had intentionally manipulated information.

Moreira was aware of the existence of the 2 May Group which began investigating the tragedy within days and whose findings have been cited by the IAP and other international bodies.  Moreira’s assistant contacted the Group and arranged a meeting. Group member Tetyana Gerasimova recalls that she was startled when Moreira only sought commentary on scenes with members of Right Sector or of police inaction, and showed no interest in learning of the unprovoked attack on a peaceful procession on which many people had come with their children.

The Group members were, like Chesanovska, appalled when they saw the result of Moreira’s highly specific ‘investigation’.  This claimed that “45 Ukrainians of Russian descent died in the fire” with this having been caused by Ukrainian nationalists’ Molotov cocktails.  It seems that in his debate with two French critics - Ioulia Shukan and Anna Colin Lebedev – he asserted that there had been silence because “the victims were Russian”.

Gerasimova rejects this and notes that the only person whose ‘Russian descent’ is certain was, in fact, Ihor Ivanov, the first person killed that day and a member of the Right Sector Self-Defence unit whom Moreira paints as villains of the story.

Claiming a massacre where there was none is a very serious matter.  Where a film director has avoided speaking with those who refute his version, despite their international recognition as experts, and instead interviews people from one side of a conflict, are we really expected to consider this legitimate journalism?   This is especially dangerous given that his audience are unlikely to have any background knowledge on the subject.

The court on June 29 concerned itself only with two specific texts.  It was, however, aware that the film had elicited strong criticism, and that makes the ruling even more baffling.  It may be difficult to prove, as Chesanovska felt, that Moreira had deliberately twisted the interviews she was familiar with.  It is not hard to understand why a very large number of French and Ukrainian journalists, civic activists and others have viewed the film in exactly the same light, and here the criticism from Moreira’s French colleagues is telling.

Sébastien Gobert, in a blog entitled On “The masks of the Revolution” – and on the ethics of journalism, wrote that he felt “insulted as a French journalist”, and pointed to obvious manipulation of information and inaccuracies.  Gobert was one of 18 journalists working in Ukraine who signed an open letter criticizing the film.  A second, published in Le Monde, was endorsed by writers, intellectuals and one former ambassador.   The journalists’ letter points to “a series of factual errors”, editing manipulation and cuts.  Some of these certainly appear deliberate deception of the viewers, for example, the use of unrelated video footage about a far-right torch procession presented as part of Euromaidan.

They were not alone in feeling outraged by the omission of any reference to Russia’s invasion of Crimea and Moreira’s claim that “after the revolution, Crimeans overwhelmingly voted in a referendum to unite with Russia”.

Moreira may not have known that even Russian President Vladimir Putin’s own Human Rights Council found that the supposed results had been falsified. It was, however, impossible not to understand that the presence of armed Russian soldiers and paramilitaries might have a direct bearing on the course of such a ‘referendum’.  This, together with the lack of any possibility of voting for the status quo, the illegality of the whole event and the absence of any observers except politicians from the far-right or extreme left known for their pro-Kremlin position, was all assiduously ignored by Moreira.

Anna Chesanovska-Jaillard is planning to lodge an appeal, and her lawyer believes that it would be helpful if lawyers from other countries expressed their position on the dangerous precedent set by this court ruling.  It would also seem appropriate for journalists and human rights groups to give their assessment of this film, honestly, fairly and without intimidation.