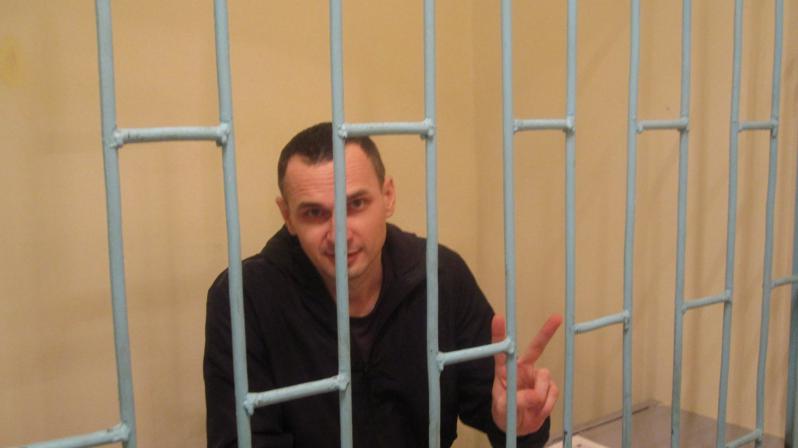 Oleg Sentsov turns 41 on July 13.  It will be his third birthday in Russian captivity.  Please write to him!  (details on how at the bottom)

After invading Crimea and faking a ‘referendum’ on ‘joining’ Russia, Moscow is applying strictly selective Russification in its persecution of Ukrainians.  While it has banned or even deported some Crimean Tatars from their homeland as Ukrainian citizens, it is falsely claiming that Ukrainian filmmaker Oleg Sentsov and civic activist Oleksandr Kolchenko automatically’ become Russian citizens.  That, at least, is the current story which, like all of Moscow’s claims regarding Ukraine is varied as required.

Sentsov, Kolchenko and two other opponents of Russian annexation - Gennady Afanasyev and Oleksiy Chirniy – were seized by the Russian FSB in May 2014.  They were held incommunicado for three weeks, first in Crimea, then in Moscow, before any lawyer was allowed to see them.  This is of critical importance since there was literally no evidence of any ‘terrorist plot’ with the entire case, and eventually Sentsov’s 20-year sentence and Kolchenko’s 10 years, based solely on the ‘confessions’ of the other two men.  Later in court, Afanasyev found the courage to retract every word of his ‘confession’, stating clearly that it had been given under torture.  Sentsov had, from the outset, described the torture that he was subjected to, but had withstood.

This FSB ‘plot’ was chillingly Stalinist in many respects, including the total disregard for plausibility. In its first  , the FSB claimed that the men had been planning terrorist attacks in Simferopol; Yalta and Sevastopol, with the aim being, for example, to destroy non-existent railway bridges.

Both Kolchenko and Sentsov objected vehemently when Russia began claiming the men to be it’s citizens. With the prosecutor initially denying Kolchenko’s Ukrainian citizenship altogether, his lawyer lodged an application with the European Court of Human Rights.  Worth noting that the Court in Strasbourg would be most unlikely to view the agreement cited as grounds for foisting Russian citizenship on Crimeans as a legally binding document since it is between Russia and the ’leaders’ whom Moscow used armed Russian soldiers to install.

Sentsov’s reaction during a detention hearing was eloquent and to the point:

“I also wish to protest against the attempts to deprive me of Ukrainian citizenship.  I have always been and remain a citizen of Ukraine.  I do not recognize the Russian Federation’s annexation and military seizure of the Crimea. I consider any agreements made by the illegitimate government of the Crimea with the Russian Federation invalid.  I am no serf to be passed over together with the land.  I have not written any applications to take on Russian citizenship and reject my Ukrainian citizenship. “ (his words can be heard )

Russia’s Prosecutor General’s Office was eventually forced to acknowledge that Sentsov and Kolchenko were Ukrainian citizens, but claimed that they also had Russian citizenship, and that this took precedence.  If this had been the case, there would be details of the men’s Russian passports on the documents regarding the prosecution and trial.  only about their Ukrainian passports. Nothing else can be provided since neither man ever signed any piece of paper agreeing to Russian citizenship.

In March 2016, the outgoing Ombudsperson Ella Panfilova confirmed in her  that Sentsov and Kolchenko are Ukrainian citizens. She possibly got into trouble over this as  appeared on the site on April 11.  This confirms their Ukrainian citizenship, but also outlines the reason for Russia’s claim that the men – against their will – ‘automatically became Russian citizens’.  The statement makes it clear that this position is not shared by the Ombudsperson.

Yet soon after this, Russia widely reported the news that its justice ministry had instructed the Penitentiary Service to collect papers for possible extradition of four Ukrainians.  Since the four whose extradition had been requested included Sentsov and Kolchenko, hopes were raised that they would be handed over.  It was presumably a propaganda trick, perhaps in advance of some international negotiations, and by October last year, the same ministry had said that they could not be extradited because they were ‘Russian’.

Russia is using this very cynical ploy to deprive Sentsov, Kolchenko and other Ukrainians held in Russian on politically motivated changes of their right to consular advice and protection under international law.  Having violated international law by occupying another country’s territory, it is indeed treating opponents as serfs who ‘come with the land’ it grabbed.

Please write to both Oleg and Oleksandr (Sasha)!