Conflicting values and conflicting narratives: the case of Russia’s war on UkraineJoint statement by UHHRU and KHPG on consequences of “recognition” of the self-proclaimed Donetsk and Luhansk People’s Republics by RussiaRussia is already holding many Ukrainian POWs without any declaration of warA great age approaches (statement of the First of December Initiative Group) Children taught Russian World propaganda and to view Ukraine as the enemy in occupied Donbas Only 0.09% of schoolkids study in Ukrainian in Russian-occupied Crimea despite Hague Court order Russia and Belarus boast collaboration on joint hit operations against their ‘enemies’ Donetsk children taught to glorify Russian Donbas mercenary likely killed on Kremlin orders Remembrance banned as ‘extremism’ and political trials on anniversary of Crimean Tatar DeportationRussia scales back troops, not its escalation of repression in occupied Crimea Kremlin’s proxy ‘republics’ launch mass ‘Russian Donbas’ propaganda campaign Moscow’s proxy ‘republics’ announce that Donbas is and always was ‘Russian’Russian proxy Donetsk ‘republic’ tries to eliminate use of Ukrainian passportsPolice refuse to react to threats against journalist who exposed pro-Russian Telegram sway over Ukraine’s legislatorsWhy were Wagner fighters from Russia seized in Belarus and can Ukraine get them extradited?Ukrainian language removed from schools in Russian proxy Luhansk ‘republic’Donbas children deployed as weapons in Russia’s hybrid warfare against UkraineBlogger spent 2 years in captivity for calling Russian-controlled Donbas occupied territory & writing the truth about MH17Open appeal from Ukrainian human rights organizations to the PACE Committee on Rules of ProcedurePoland charges three with terrorism & sees Russian link in arson attack on Hungarian Centre in Ukraine
• Topics / Terrorism

War in Ukraine Was Years in the Making 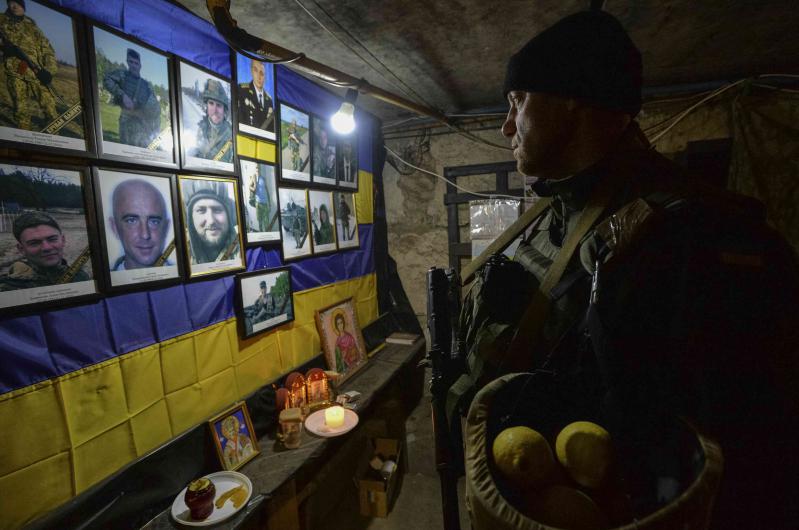 A Ukrainian serviceman looks at a wall with portraits of his comrades killed in fighting with pro-Russian rebels, at a position on the front line at the industrial zone of government-held town of Avdiyivka, Ukraine March 7, 2017. REUTERS/Oleksandr Klymenko

Ukraine is the only country in the world that has ongoing experience with a hybrid war—a simultaneous and adaptive military strategy that blends conventional and non-conventional means. As a result, it offers valuable lessons that could help the West better understand emerging threats. In the last three years, Ukraine has found itself drawn into the burgeoning confrontation between an insolent Russia and a timid West. Taken by surprise, violated, and robbed by a neighbor who for decades touted the historical and ethnic ties between them, Ukraine was forced to quickly mobilize its scarce resources and learn how to fight a sophisticated enemy in a new type of warfare.

In a new comprehensive study, “The World Hybrid War: Ukrainian Forefront,” experts from Ukraine’s National Institute for Strategic Studies (NISS) examine the Ukraine-Russia conflict in the context of the global security crisis.

In the monograph, they conceptualize hybrid war, trace its origins, look at the evolution of Russia’s revanchist ambitions, single out Ukraine’s vulnerabilities and its response, and advocate a new strategy. The authors aim to share Ukraine’s experience of hybrid war with Western readers and leave no doubt about the true nature of Russia’s goals.

Volodymyr Horbulin, director of the NISS and the editor of the monograph, argues that a hybrid war has an undeclared beginning and an indefinite end. It has no outright winners, lacks clear goals, and “operates on several fronts simultaneously, inconsistently, and asymmetrically.”

The monograph challenges those who view hybrid war as being a temporary phenomenon or a return to the Cold War, arguing that it constitutes a new form of global confrontation conducted between zones of stability and zones of chaos, between spheres where the rule of law is respected and those where it is not. Unlike the Cold War, which occurred in a bipolar world, hybrid war occurs in the age of globalization and subsequently cannot be confined to the periphery. The authors emphasize that the Donbas conflict is no longer local; it is, in fact, “a starting point for the formation of the new hybrid world order.”

One lesson that can be drawn is that hybrid wars begin prior to the active phase. Russia prepared for years on many fronts before activating this war. Ukraine’s historical dependencies on Russia created vulnerabilities that Russia successfully exploited; for example, Ukraine’s connections to oligarchs and its pro-Russian politicians promoted the Kremlin’s agenda, supported pro-Russian integration projects, and spread ideas of separatism. They allowed Russian intelligence forces to infiltrate Ukraine’s national security apparatus to conduct subversive operations. Russia also exerted numerous forms of economic pressure on Ukraine, including trade and gas wars. And Ukraine’s media oligarchy and its dependence on Russia’s information space made Ukraine vulnerable to the Kremlin’s disinformation campaign.

The disinformation campaign has created many false narratives. We have seen different interpretations of events, and contrasting claims about who’s involved and even different names for the conflict. In the Russian case, identifying the main players is tricky, since President Vladimir Putin denies Russia’s involvement, regarding himself instead as a peacekeeper, while implying that the victim is the actual aggressor. The monograph treats the verbal dimension as a separate component of the hybrid war, different from the kinetic one.

The authors underscore the dangerous presumption made by Ukraine and the West that there was no threat of war prior to 2014. In fact, Ukraine’s multi-vector foreign policy, nuclear disarmament, non-bloc status, and ineffective national security system put it at a great disadvantage. And when the active phase began, the country found itself in a security vacuum with only assurances from other countries. Although the West showed solidarity with Ukraine by condemning Russian aggression and imposing economic sanctions, this response has been insufficient, according to the monograph’s writers.

They draw historic parallels between this hybrid war, Moscow’s tactics in Moldova and Georgia, and Soviet methods. For example, Russia has suppressed independent thought and supported tactics that utilize nationalism, propaganda, protection of Russian speakers, economic support for loyal regimes, subversive actions, bribes, and military intervention for decades; its actions toward Ukraine are not new.

At present, Russia skillfully uses diplomacy to deny responsibility while at the same time it legitimizes the occupation through the Minsk peace process, whose terms are unfavorable to Ukraine.

What is Russia trying to achieve? The authors argue that Russia seeks to destroy Ukraine’s sovereignty, reduce its geopolitical role, and reverse its Euro-Atlantic course. Some of the ways the Kremlin does this are by promoting federalization, supporting anti-government protests, and “revitalizing the pro-Russian lobby.”

Thanks to the efforts of Ukraine’s military, as well as to public support and the spirit of volunteerism, Moscow has failed to destroy Ukraine’s sovereignty. To assure greater success, however, Ukraine needs to make smart preparations by relying on its own efforts. Horbulin recommends that Ukraine try to expand the Normandy talks to include the UK and US, which were signatories of the Budapest Memorandum. He also advocates that Ukraine craft a new long-term asymmetric national strategy to fight fake separatism and disrupt Russia’s goals without ruining its own economy, build up and reform its defense capabilities, consolidate domestic and international support, and be “more active, more creative, and more pragmatic.”

But as the book puts it, “our main strategic goal now is...whether we will be able to grasp and fully understand this new hybrid world, to understand its laws and patterns that until now have appeared to be а total chaos.” Reading this book would be a good first step.

Vera Zimmerman, a UkraineAlert contributor, is an independent research analyst and translator of Russian, Ukrainian, and English.