Invasion of Crimea & war against Ukraine lead to prison and attack on free speech in RussiaFurther reprisals against Russian blogger jailed for reposting that Crimea is UkraineRussian gets 2 years for reposting that Crimea should be returned to UkraineRussian blogger gets 2-year sentence for reposting that Crimea is UkraineMore reprisals against Tatar leader jailed for criticizing Russian occupation of CrimeaSo can you annex a country’s territory & jail those who criticize this for ‘separatism’?3-year sentence for criticizing Putin and Russia’s annexation of Crimea5 years imprisonment for criticizing Crimean annexation and Putin?Poet labelled ‘terrorist’, flung off Wikipedia for verse in support of UkraineRussian teacher on trial for poem against annexation of CrimeaKaliningrad ’flag prisoners’ charged with insulting the veterans Moscow rejects7 years for raising flag in protest at Russian invasion of CrimeaKaliningrad FSB finds ‘deep offence’ in a German flagRussia, the improbable human rights crusaderPutin’s selective terrorismPro-Russian thugs beat up Ukrainian unity demonstrators – except on Russian TVArmed men cut off Ukrainian channels in DonbasDonetsk television station seized to provide "correct" - Russian - coverageMoscow’s “Voice of the People” in SlovyanskMurdered in Slovyansk
• Topics / Freedom of expression
• Topics / Human Rights Abuses in Russian-occupied Crimea 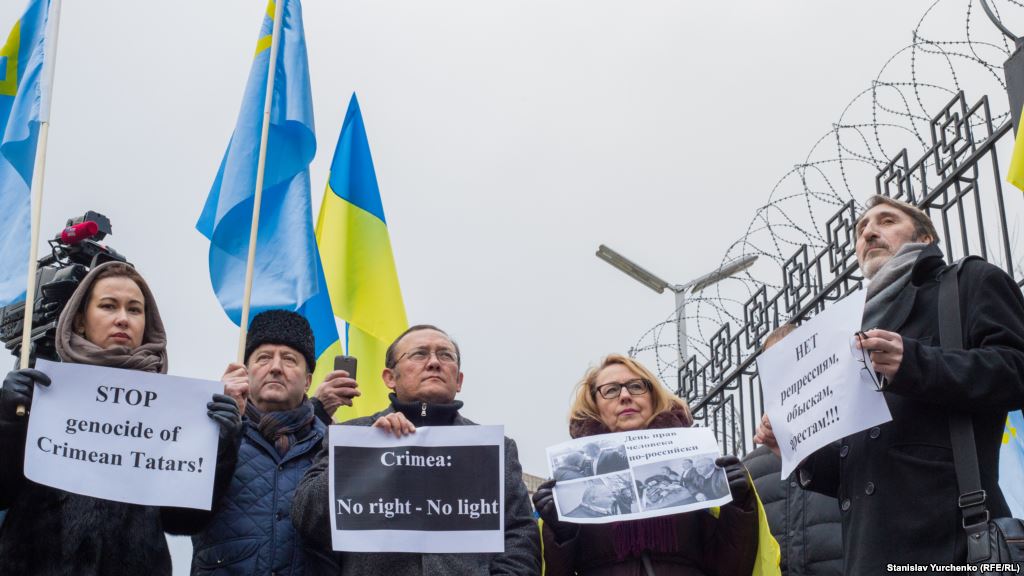 Disturbingly little is known about this prosecution and the sentence which was in fact passed on July 7.  It was only reported, according to a Kremlin-loyal website, by the FSB on July 18, with this possibly to avoid any possibility of an appeal.  Minasov does not appear to have been in detention, but also did not appeal against the sentence which has therefore now entered into force. It is unclear whether he had a lawyer.

The FSB claim that Minasov on several occasions from March to October 2016 posted “material of an extremist nature”.   The FSB accused him over six ‘episodes’, though only four are mentioned on the court website.

The Facebook page in question contains posts protesting against annexation of Crimea and the occupation regime.  On March 2, 2016, for example, he signed a petition from the civic initiative Let My People Go, calling on the then German Foreign Minister Frank-Walter Steinmeyer to use his influence to seek the release from detention of Crimean Tatar leader Akhtem Chiygoz, and two other Crimean Tatars – Ali Asanov and Mustafa Degermendzhy – charged with involvement in a legal and peaceful demonstration before Russia’s invasion. Under the petition, reposted with the message that he had just signed it, Minasov wrote that “they’re held illegally in detention, and, in general, there is total repression of the indigenous Crimean Tatar people!”.

On March 11, he reposted a text with quotes from Lenur Islyamov, coordinator of the Crimea blockade regarding measures needed for the return of Crimea.

The lack of any information about the case, and the fact that Minasov did not lodge an appeal, probably suggests that he decided – or was put under pressure – to admit guilt for a ‘lighter sentence’.

There is nothing on his Facebook page at present that makes his conviction understandable, and the sentence is the first of its kind in occupied Crimea.  There have, however, been prosecutions in Russia with people convicted of ‘incitement’ for criticism of annexation and / or Russia’s actions.

Rafis Kashapov has been imprisoned since December 2014.  He was convicted in May 2015 of so-called public calls to action aimed at violating Russia’s territorial integrity and of ‘incitement to enmity / hate speech’, and sentenced to three years’ imprisonment.  His was the first conviction under Article 280.1 § 2, and was, quite literally, over his expressed opposition to Russia’s occupation of internationally recognized Ukrainian territory.

While it is not impossible that the FSB forced Minasov to remove certain posts, in the case of the material over which Kashapov is imprisoned, it can all be freely viewed where it was originally posted.

In a recent report ‘Freedom of Speech as Victim’,  Pavel Chikov and Damir Gainutdinov from the Agora Human Rights Group gave a detailed account of how one of the victims of Moscow’s invasion and ongoing aggression against Ukraine had been freedom of speech in Russia itself.  The regime has used events in Ukraine as a pretext for increasing restrictions, and there has been a huge increase in attacks on journalists and activists who speak out in defence of Ukraine.  The perpetrators enjoy impunity while victims who try to defend themselves can end up prosecuted.

Russia is currently illegally prosecuting Ukrainians in occupied Crimea on various politically motivated charges, with Crimean Tatar leader Ilmi Umerov and journalist Mykola Semena on trial accused of ‘public calls to action aimed at violating Russia’s territorial integrity’ for saying, as do all international bodies that Crimea is Ukrainian.