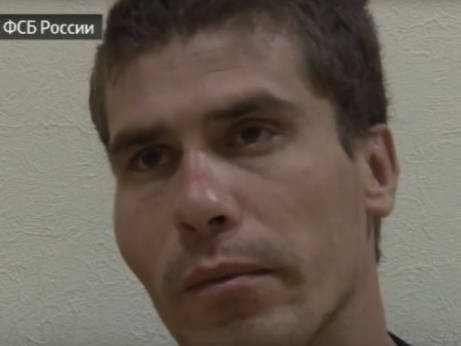 Almost a year after Russia’s FSB produced videos on which Crimean Tatar Redvan Suleymanov and three other Ukrainians separately ‘confessed’ to taking part in a ‘Crimean sabotage’ plot organized by Ukraine’s Military Intelligence, one of the men has been convicted of something else altogether, and the ongoing trial of Suleymanov also bares scarcely any resemblance to the original ‘plot’.  Now the prosecution has been forced to acknowledge that there are no grounds for the claims made by three of the alleged ‘aggrieved parties’.

Emil Kurbedinov, Suleymanov’s lawyer, reported on July 21, that the prosecution had altered the indictment, discarding as baseless the claims for ‘losses’ from Russia’s FSB; the Crimean emergencies ministry and Simferopol Airport.  He explained to Krym. Realii that the prosecutors are still alleging that Suleymanov caused losses to the Kerch Ferry Terminal and the Simferopol Bus Station, with the alleged amount in damages coming to a hefty one million 900 thousand roubles. The amount claimed has thus been reduced, but the article of Russia’s criminal code is unaffected.

Kurbedinov hopes to prove to the court that there are no grounds for any of the claimed losses.

This would leave it unclear why Suleymanov has been in detention for almost a year, however there is another reason why optimism might prove unfounded.  Journalist Anton Naumlyuk recently pointed out that shortly before the alleged incident, a lot of questions had been publicly asked about the squandering of public funding at the terminal. He believes that the story, with the alleged massive losses, may be an attempt to prove a cover for their corrupt dealings.

On August 10, 2016, Russia’s FSB claimed that it had foiled terrorist acts planned by the Ukrainian Defence Ministry’s military intelligence.  It asserted that there had been major incidents, with shelling from mainland Ukraine, during the nights from 6-7 and 7-8 August, with 2 Russians – an FSB officer and a soldier – killed.

There are independent reports about something taking place in the early hours of Aug 7, though they suggest rather that an FSB officer died in a drunken brawl, and there is nothing at all to back the claims about the second night and supposed shelling from Ukraine.

Then on August 12, Suleymanov was shown on Russian TV ‘confessing’ to having been recruited by Ukraine’s military.  On the video,  which has clearly been cut and pasted, Suleymanov says that he was recruited by Ukrainian military intelligence in 2015 and given the pseudonym ‘Joseph’.  He was ordered to gather information, and told to find himself a job at the airport or railway station to report on the movement of military technology.

Suleymanov finally recounts how on July 30, 2016, he went to Simferopol Airport where he phoned the Defence Ministry contact and told him that he’d planted the item successfully.  The contact told him to wait, and then create a “conference link” with the police. At this point, he says, he heard something that shocked him “that I’m Akhmet Karimov, and that today my brothers and I are moving from a small to a big Jihad, and that at 12.00 on the dot, we will blow up the airport, then other places.   He was detained, he says, while photographing what happened in the airport after this call, which could realistically be expected, making the alleged task senseless.

The story was wildly implausible for multiple reasons.  Crimean Tatars have been under scrutiny since Russia’s invasion.  Suleymanov himself had doubtless come to the notice of the FSB early in 2014 when he was among the Ukrainian who held out for over 20 days, refusing to abandon a Ukrainian military unit surrounded by Russian soldiers.

Suleymanov remained in custody, however by the time the case came to court, the charges had changed radically.

Despite the original allegations against him and his own ‘confession’, as well as headlines like ‘Ukrainian saboteur planned to blow up an airport in Crimea’, he was charged only with making a false bomb threat, with the extraordinary claim that this had caused 4 million roubles in damages.

It is unclear how he could have caused damage to the bus station and Kerch port terminal, but it is surely significant that no proof of the airport having sustained damages was ever found.  Nor, effectively, of any of the ‘crimes’ to which four men held in FSB custody without lawyers and, according to three of them, mercilessly tortured, ‘confessed’.