Russia razes Ukrainian city to the ground and says ‘there’s no point’ to rebuilding it Russian legislative changes would mean school leavers can officially be sent to fight in Ukraine Court in Russia inadvertently reveals the huge number of Russian military forces deployed in Donbas A great age approaches (statement of the First of December Initiative Group) FSB deploys menacing new weapon against journalists and lawyers in Russia and occupied Crimea Every second Russian supports a monument to Soviet dictator Stalin Russia and Belarus boast collaboration on joint hit operations against their ‘enemies’ Abducted journalist’s life is in danger in Belarus. Not only his while Lukashenko and Putin get away with terrorismProminent Russian human rights lawyer arrested for doing his job Protests throughout Ukraine following 7-year sentence against civic activist Serhiy SternenkoExposing the ‘experts" who secretly help to imprison Crimean and Russian political prisoners Russia forced to ‘change the status’ of occupied Crimea because of sanctions ‘Defamation’ criminal charges for civic activism in Russian-occupied Crimea Russia threatens criminal prosecution over calls to impose sanctions Fake ‘Ukrainian fascist’ arrested and charged with working for Russia and its proxy Luhansk ‘republic’ 2020: There was no worse year in the realm of human rights after the Revolution of DignityLukashenko plotted to kill Sheremet yet Ukraine has charged people with no motive for his murder Russia launches dangerous new ‘foreign agent’ offensive against independent NGOsOpinion on the political motives of criminal persecution and violation of human rights in the case of Sergiy PashinskyNew Russian draft bill envisages criminal liability for telling inconvenient truth about the USSR in WWII
• Topics / News from the CIS countries 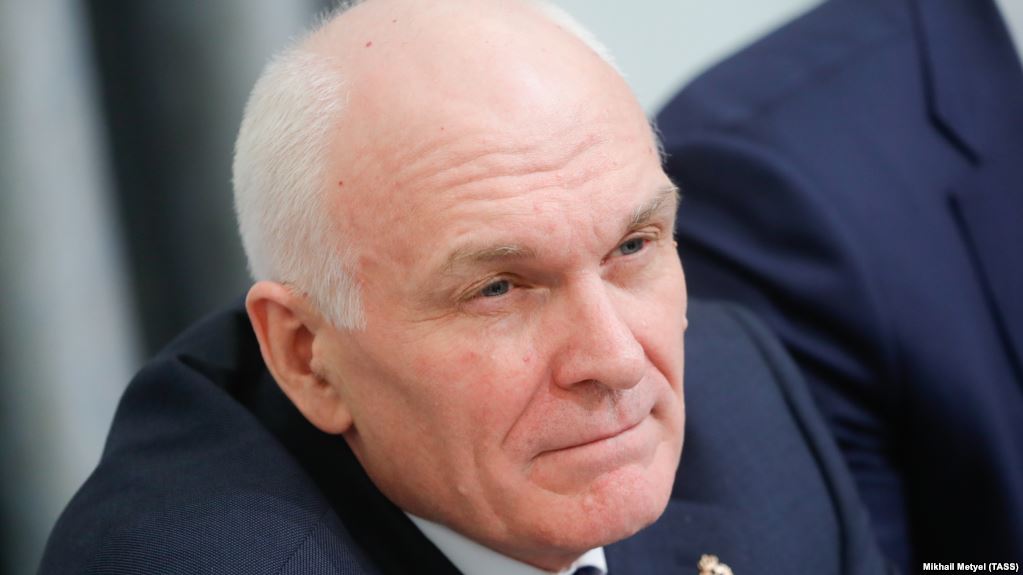 Vladimir Litvinenko is the rector of the St. Petersburg Mining Institute.

Add another name to the list of Russian President Vladimir Putin’s associates who have reportedly become billionaires under his reign.

Vladimir Litvinenko, a former Putin campaign manager and a St. Petersburg university rector who has said he supervised the Russian president’s dissertation, is now worth more than $1 billion, according to a respected Russian newspaper.

News of Litvinenko’s rising fortune ricocheted across the Russian media landscape on July 24 following an investigation of his wealth and assets published by the Vedomosti business daily.

The rector of the St. Petersburg Mining Institute is one of several Putin associates to have amassed fortunes during the Russian president’s 17 years in power. Their wealth has triggered accusations -- rejected by the Kremlin -- of corruption and cronyism from Russia’s opposition and Western officials.

An analysis by the Russian version of Forbes magazine last year showed that three billionaires seen as close to Putin -- businessmen Arkady Rotenberg and Gennady Timchenko, as well as Putin’s reported son-in-law, Kirill Shamalov -- netted billions of dollars in state orders in 2015.

It was no secret that Litvinenko was a wealthy man -- at least not since 2011, when Russian fertilizer giant Phosagro revealed details of its ownership. Phosagro said the academic owned a 10-percent stake in the company, which waspreviously owned by Russian-tycoon-turned-jailed-Kremlin-foe Mikhail Khodorkovsky.

Litvinenko -- who ran Putin’s presidential campaign in St. Petersburg in 2000, 2004, and 2012 -- has steadily increased his stake in Phosagro. In April, he bought up a further 4.81-percent share, bringing his total stake to 19.35 percent, according to Phosagro’s website.

On its 2017 list of Russia’s richest people, the Russian version of Forbes magazine estimated Litvinenko’s wealth at $850 million.

But his purchase of additional Phosagro shares in April -- which made him the company’s second-largest shareholder behind the family of Russian tycoon and former lawmaker Andrei Guryev -- pushed Litvinenko’s wealth over $1 billion, Vedomosti reported.

The newspaper appeared to base its estimate on Phosagro’s value on Russia’s main stock index, the Micex, at the close of trading on July 21. Based on that measure, his stake was worth 59.9 billion rubles, or $1 billion. Litvinenko’s declared income last year was 195.7 million rubles ($3.27 million).

The Vedomosti investigation, which looked into how Litvinenko amassed his wealth, was the top news item on the leading Russian search engine Yandex on July 24. The report, which said Litvinenko refused to comment, came to no firm conclusions about how the rector obtained his original stake.

Forbes and other Russian media outlets had previously reported that Litvinenko took part in a 1990s voucher privatization of Apatit, a major fertilizer-component producer that was later acquired by Phosagro.

The allegedly illegal privatization of Apatit was part of Russia’s politically explosive prosecution of Khodorkovsky, whose bank, Menatep, acquired a 20-percent stake in the firm in 1994. The asset was seized by the state and sold back to Phosagro in 2012.

Litvinenko’s estranged daughter, who has been locked in a custody battle with her parents over her daughter for years, said in an interview this month that she believes her father has been able to leverage his links to Putin to enrich himself.

“I don’t deny that he has excellent managerial abilities,” Olga Litvinenko, who lives in Europe and recently joined a civic group founded by the now-exiled Khodorkovsky, told RFE/RL’s Russian Service. “He undoubtedly has managerial talent. But it was his friendship with Putin that opened many doors.”

Litvinenko has served as the St. Petersburg Mining Institute’s rector since 1994. Three years after Litvinenko took the helm there, Putin earned a graduate degree from the institute, writing a dissertation that two scholars at the Washington-based Brookings Institution later alleged had been partly plagiarized.

Olga Litvinenko claimed in the interview with RFE/RL’s Russian Service that she had seen her father write the dissertation at the family dacha. The assertion could not be independently verified.

For his part, Litvinenko has defended Putin against the plagiarism allegation.

“I followed the work on [the dissertation] from day one,” Litvinenko was quoted by the Kommersant newspaper as saying in 2006, adding that he and his colleagues had told the former KGB officer and future president to rework the first draft of the paper.

Litvinenko said he had “no doubt” that Putin wrote the dissertation himself and that “enemies” of Putin were seeking to smear him, Kommersant reported at the time.