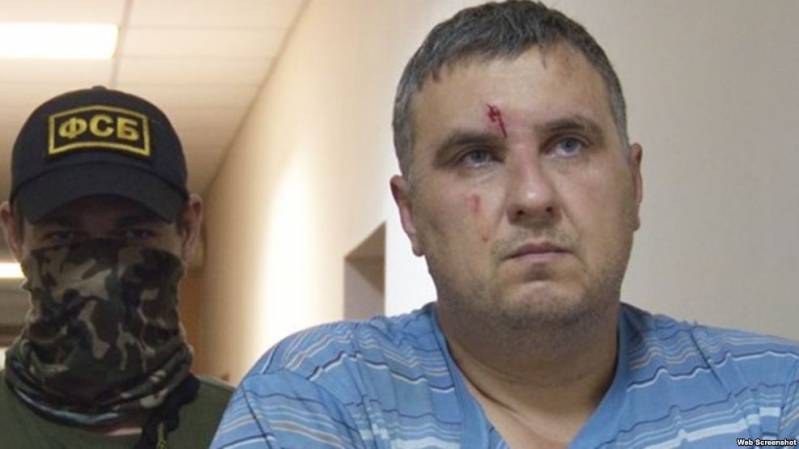 Ukrainian Yevhen Panov has proven to be the Russian FSB’s greatest miscalculation in its generally aborted first attempt to fabricate a ‘Ukrainian Crimea Saboteur’ plot.  The torture used to obtain his ‘confession’ was too obvious, and the efforts to prevent him seeing a real lawyer thwarted by the European Court of Human Rights.  A year after his effective abduction, he remains in Russian custody with the FSB using particularly appalling conditions and other means to pressure him into agreeing to ‘cooperate’.  So far to no avail.

Panov is a driver at the Zaporizhya Nuclear Power Plant in Enerhodar, who had also been very active since Russia’s invasion of Crimea and war in Donbas as a volunteer, both in civil defence for his city and in helping the Ukrainian army.

On August 6, he responded to a phone call, seemingly from a fellow volunteer, asking him to help evacuate a family from Russian-occupied Crimea who were in danger. This, however, his family only discovered much later, after he disappeared.

On August 10, 2016, Russia’s FSB [security service] claimed that it had foiled terrorist acts planned by the Ukrainian Defence Ministry’s military intelligence and targeting critically important parts of Crimea’s infrastructure.  This was aimed, the FSB asserted, at destabilizing the situation in the run-up to Russia’s elections which were illegally taking place in occupied Crimea.

The video with Panov’s ‘confession’ and, supposedly, his and Zakhtei’s stockpile of weapons was very sloppily done.  One scene for example showed a full moon which meant it must have been shot at least three weeks earlier.

A video produced by the FSB was shown widely on state-controlled Russian media.  On it, Panov is seen ‘confessing’ to working for Ukrainian military intelligence and saying that he was invited to Kyiv and told that a group was being formed for acts of sabotage in Crimea. He reels off several names, none of them the people he was allegedly caught with, and says that they had come to Crimea together to decide on targets for the acts of sabotage and had chosen the ferry crossing, an oil handling terminal, a helicopter regiment and chemical factory.  Later they had hidden ammunition, etc. in a hiding place.  He mentions also that he was paid money for this.  All of this was supposed to be organized by Ukraine’s military intelligence.

None.  There are certainly four ‘confessions’, however Prysich has since been convicted of something quite different, while Suleymanov is now on trial with the charges in his case also at odds with what he ‘confessed’ to.

An independent forensic analysis found no traces to suggest that Panov and Zakhtei had ever touched the stockpile of weapons they were alleged to be using.

Both Panov and Zakhtei were moved to Moscow shortly after that brief meeting.  In Moscow, both men were placed under heavy pressure to give up their independent lawyers.  Both refused and they were eventually moved back to the Crimea where the conditions in the Simferopol SIZO [remand unit] are in themselves a form of torture.

Zakhtei recently gave in and agreed to plead guilty and give up his lawyer.  He has presumably been offered a lighter sentence, though it remains to be seen whether such assurances are honoured.

Panov remains incarcerated and under major pressure, but also unbroken.