Jailed in Russian-occupied Crimea for a Ukrainian Flag 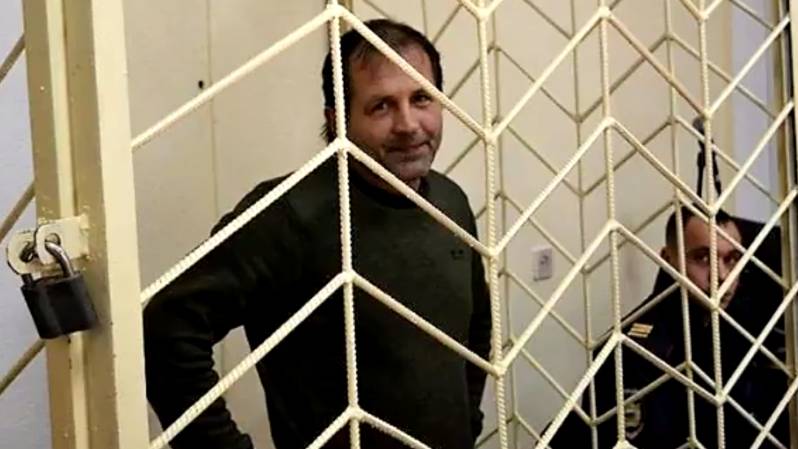 46-year-old Volodymyr Balukh, a Ukrainian farmer, activist and recognized political prisoner, has been sentenced to 3 years, 7 months after a gravely flawed trial which human rights groups have condemned as reprisals for his open opposition to Russia’s occupation of his native Crimea - and, effectively, for a Ukrainian flag.  The de facto judge at the Razdolne District Court  - Maria Bedritskaya – claimed that all evidence had been gained lawfully, and also imposed a 10 thousand rouble fine.

Bedritskaya was warned by the defence from the outset that even under Russian legislation a judge faces criminal liability for imprisoning people on the basis of overtly rigged evidence.  She chose to ignore the weight of proof that the charges against Balukh are politically motivated and fabricated, and merely accelerated the final verdict in order to go on holiday.

Balukh was arrested on Dec 8, 2016 after 90 bullets and several trotyl explosive devices were allegedly ‘found’ in his attic.  He had no record of violence and the constant searches and series of administrative prosecutions he had faced since Russia’s invasion of Crimea for his openly pro-Ukrainian position made it inconceivable that he could have held anything illegal in his home.  This was one of the grounds for the Memorial Human Rights Centre’s decision to declare the 46-year-old a political prisoner well before the trial.  There were many other compelling reasons, including scarcely concealed falsifications and procedural irregularities which the ‘judge’ has not only refused to consider, but has even taken part in.

During his final address on August 1, Balukh pointed out that there was in fact no criminal case, only a farce acted out by those instructed to play it to the end. His words were essentially a message for all Ukrainians and any person confronted with the possibility of retaining his liberty by betraying his principles and acting against his conscience.

Although his civic activism, as a member of the local electoral commission began way back in 1999, he dated the decision to deal with him once and for all back to Russia’s annexation of Crimea, and gave a detailed account of all the methods applied.

“What is happening with me is a vivid example of how the state machine works.  Nothing is sacred, no legal arguments, nothing has any effect on it, and it’s all according to the will of one or several people.  This is the first reason why I’m here. The second reason is my love for my Homeland, for everything that I am made of, my nationality, my memory of my forebears, all of them whom I know. They were Ukrainians, worthy people preserving their traditions. That was how we were raised by our mother and father. My Homeland is for me the same as my mother, my family, my children.

The occupation of Crimea was the starting point. It is no accident that details emerged in the case from back in 2010. The system has long and successfully ground just such people. It has broken many, many give way. After all that’s how the system is set up – I had a choice. If I had gone against my own conscience, forgotten my principles, it would have been enough to say I was guilty, become morally broken in order to avoid prison. And that individual sitting opposite me, he wouldn’t have demanded five years and a month, but some two or three years, maybe a suspended sentence, just give in.

Well, I don’t want life on earth to end, I don’t want my descendants, by that I mean the children of all Ukraine to one day reproach me for having been cowardly, shown weakness. Yes, there were objective reasons, nobody wants to go through what I’m experiencing now.  You can understand any person, but I have nonetheless lived the best years of my life, and at my age I can’t afford to show cowardice. Therefore what will happen, will happen.

The only thing is that I ask my sister to ask my mother to forgive me.

Volodymyr Balukh’s speech can be heard in full here https://youtube.com/watch?v=NdF-4aWlTW0

Russia’s arrests since it annexed Crimea have shattered the lives of whole families. Balukh’s final request to his sister is most poignant as his elderly mother, Natalya Balukh, is tormenting herself for not having agreed to leave Crimea after Russia’s invasion.  Balukh and his wife have a farm in the village of Serebryanka in northern Crimea, which his wife is unable to cope with alone.  Neither can his mother, as Volodymyr had spent a lot of his time tending and carrying out necessary repairs to her home.  His family has been without any means of survival since December last year, and the demand for a huge sentence under Article 222 § 1 of the Russian criminal code seems clearly part of the order to imprison him for as long as possible.

Russia is using the methods of the later Soviet period where the KGB tried to avoid overtly political charges (of ‘anti-Soviet propaganda’).  In this case, however, the political motivation was clear from the outset.

The charges were implausible in themselves, as noted by the Memorial Human Rights Centre, and came straight after his action to honour Maidan victims;

This was at least the third ‘prosecution’ since annexation, with the others having been no less absurd.

The irregularities were breathtakingly cynical.  Key witnesses have been allowed to not turn up for questioning, and Bedritskaya assiduously avoided noticing the clear evidence that all procedure for carrying out a search had been breached.

During the questioning of Yevgeny Bobrov, the criminal investigations officer who supposedly found the ammunition and who undoubtedly removed the Ukrainian flag, Bobrov could not explain his role and legal status during the search. He had not been on duty that day, and he could not name the individuals who had instructed him to be present or their position in the law enforcement bodies.

Balukh and his wife were prevented from seeing the supposed ‘search’ of their home. The ammunition which the men, wandering in some unclear capacity around the Balukh home, allegedly found, had no fingerprints or other traces to indicate that any member of the family had touched them.  Most important, the ammunition in question was on the official register of weapons and ammunition in Barnaul, the Altai region of the Russian Federation, and was produced back in 1989.

None of this proved to be of interest to the ‘investigator, prosecutor and judge’ who had evidently received the order to imprison Balukh.  An order which, unlike the Ukrainian activist, they had no difficulty obeying.