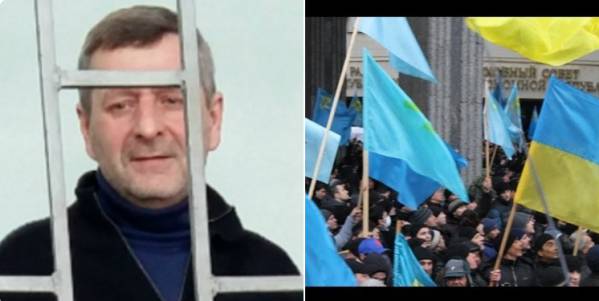 The sentence is awaited of Akhtem Chiygoz, Deputy Head of the Crimean Tatar Mejlis and recognized political prisoner.  He and other Crimean Tatars are on trial, as Chiygoz said in his final address, for upholding the law and for defending Ukraine’s territorial integrity, with Russia’s prosecution carried out by people who themselves turned traitors. Although Chiygoz has officially not been convicted,  he has already been held in custody for two and a half years on openly lawless charges and an acquittal is not anticipated.

Akhtem Chiygoz is himself clear not only that a prison sentence is awaited, but also that this is “a sentence directed against the entire Crimean Tatar people on behalf of the Russian Federation which has occupied my Homeland”.

His words were spoken from the SIZO or remand prison since Russia is too scared of publicity and has prevented Chiygoz from attending his own trial since July 2016.  He was prevented from being at his own mother’s funeral and was allowed to see her before her death for only ten minutes.

The Crimean Tatar leader began his final words by mentioning that meeting.  He had asked her forgiveness for not being able to be by her side during those last hard days.  “Summoning her last strength, she said: “I am proud that I raised such a son!”

However hard all of this is, and even if he does not come out alive, Chygoz is clear that he would be more afraid of actions, thoughts or utterances that shamed him as a person and as a Crimean Tatar.  If he gave cause for his people to be ashamed of their trust and election of him to the Crimean Tatar Mejlis (representative assembly).

Nothing has crushed the will of the people, nor could anything destroy their sense of identity, their love for their Homeland, passed on from generation to generation.

Chiygoz then referred to the demonstration over which he is illegally imprisoned and charged.  This took place on February 26, 2014, before Russia’s invasion and annexation of Crimea and Russia is therefore in breach even of its own criminal code.  There were two demonstrations that day which largely coincided in time and space.  One was organized by the Mejlis, with around 10 thousand Crimean Tatars, Euromaidan activists and other Ukrainians gathering to block any attempt by parliament to push through a change in Crimea’s status.  The Russian Unity party, led by Sergei Aksyonov organized a counter-demonstration, with around 4 thousand pro-Russian demonstrators.

Having been prevented from achieving an effective coup through a parliamentary ‘extraordinary session’, Moscow ordered Russian soldiers to seize control early the next morning.   Several hours later, a ‘parliamentary session’ was forced through by the soldiers without insignia but with very real Kalashnikov rifles, and Aksyonov was installed as ‘leader’.

Under Russian occupation too, Crimean Tatars and other Ukrainians have, despite all the abductions and killings, the searches, arrests, bans on remembrance, the huge fines for the least demonstration of civic activism, continued to fulfil their civic duty.

It is this, Chiygoz says, that drives the occupation authorities crazy and leads them to stage judicial farces against innocent people.

The so-called ’26 February 2014 case’, he believes,  is aimed at intimidating the Crimean Tatar people, crushing and minimizing their activeness in defending their rights, their support for Ukraine and their refusal to recognize the illegal annexation of Crimea.

It is clear to everybody, Chiygoz said, that there is no ‘case’ against him.

The invading country has, without any right to it, staged this judicial travesty.

Chiygoz says that he understands the true aims of those who commissioned this trial and has no grounds for expecting the court to show objectivity and independence.

The court under judges Viktor Zinkov (presiding); Ihor Kryuchkov and Alexei Kozyrev has certainly not demonstrated any wish to do more than imitate a trial over the last year.

It has, for example, consistently rejected applications to call vital witnesses – the Head of the Mejlis, Refat Chubarov, whom Russia first banished from his homeland and then also initiated criminal proceedings against, and the Mufti of Crimea, Emirali Ablaev, who was at the demonstration in exactly the same role as Chiygoz, but who later chose to collaborate with the occupiers.  The defence believes that he may be one of the unprecedentedly high number of so-called ‘secret witnesses’ (seven) who are virtually the only people who have testified against Chiygoz.

The court has rejected virtually all applications from the defence, and gravely violated Chiygoz’s right to a fair trial by preventing him attending his own ‘trial’.

Most of all, however, it has allowed this lawless trial to continue.  The de facto prosecutor Anastasia Ivanovna Supryaga has even acknowledged the fact that the prosecution clashes with Article 12 § 3 of Russia’s criminal code.  This unequivocally states that a criminal prosecution can only be initiated against foreign nationals who committed an offence on the territory of another country if “the crime was directed against the interests of the Russian Federation or a citizen of the Russian Federation.”

Supryaga claimed that although the events had preceded Russia’s annexation, Russia’s laws had taken on retroactive force.  This she asserted was dictated “by the need to defend the rights and interests of citizens”.   The entire travesty of a trial has been on this level, with the ’judges’ all acquiescing.