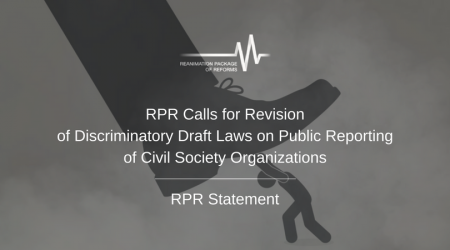 On July 10, the President submitted to the Verkhovna Rada two draft laws repealing obligatory electronic declaration for participants of any anticorruption activities and equally setting up discriminatory rules for public reporting of civic organizations (draft laws No.6674 and No.6675).

Experts of the Reanimation Package of Reforms note that no relevant open consultations with neither official advisory body – the Coordination Council on Civil Society Development under the President of Ukraine, nor with other civic organizations were carried out while drafting these bills. It is the lack of publicity and engagement of stakeholders to the process of drafting the aforementioned bills that led to shortcomings that the experts are calling to urgently eliminate.

Introduction of public reporting is quite a universal tendency of time that should apply to all legal entities. By generally supporting the idea of increasing transparency of non-profit sector, Reanimation Package of Reforms experts underline that suggested draft laws contain a number of provisions that contradict national and international legislation, are discriminatory and consequently should be withdrawn taking into account the following proposals:

Taking all above said into account, experts of the Reanimation Package of Reforms call on the President of Ukraine and the Verkhovna Rada of Ukraine in joint cooperation with the public to withdraw discriminatory provisions of draft laws No.6674 and No.6675 prior to their consideration by the Parliament.

More reaction here: Ukraine: From targeting anti-corruption NGOs to "a witch hunt on all civic activists"?