Road To Dispossession: Locals Pushed Aside For The Trans-Crimea Highway 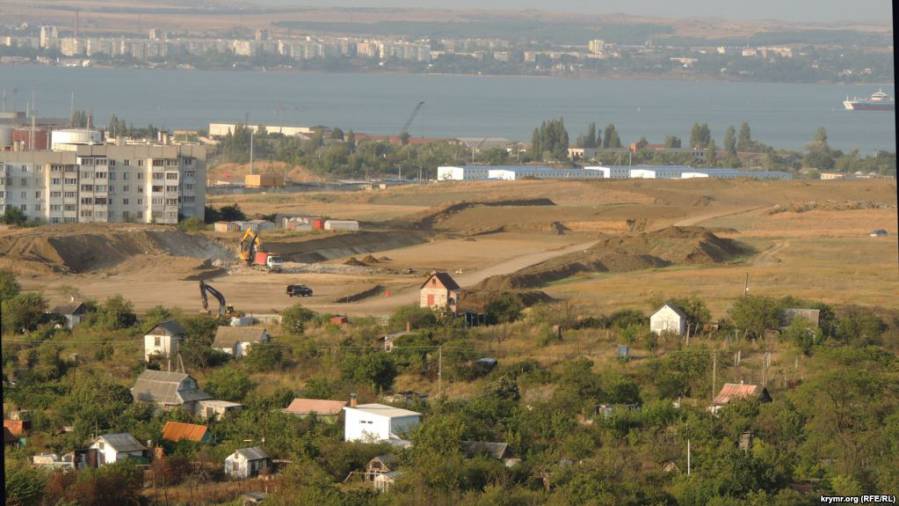 People in Kerch and other locations along the planned highway route are already feeling the pain of dislocation.

KERCH, Ukraine --  For years and even decades, residents of the Crimean city of Kerch have tended orchards and gardens in the green dacha community of Zaliv.

But in recent days they have watched in anger and sadness as bulldozers and other construction machinery have begun clearing the area to make way for the construction of a highway that is planned to someday span the entire Crimean Peninsula and connect to the Kerch Bridge. The local Kerch.FM outlet posted a video in which angry locals watch as their trees crash to the ground.

"These are real barbarians," one woman is heard saying. "It looks like they are enjoying destroying not just the land, but the people, too. They don’t have a gram of shame or conscience. They are the lords here, and we are nobodies."

Since Russia illegally annexed Ukraine’s Crimean Peninsula in early 2014, Moscow has pledged billions of dollars to build the infrastructure necessary to connect the region with the Russian mainland to the east. The signature project is the 19-kilometer road-and-railway currently being built across the Kerch Strait at a cost of some $5 billion.

Last week, builders began the process of moving the span’s iconic white arches into place and on August 7, Moscow prompted protests from Kyiv by announcing periodic closures of the Kerch Strait to shipping, effectively cutting off southeastern Ukraine. The strait will be closed for 23 days in August and September. On August 9, the waterway was closed for 12 hours.

To meet the bridge on the Crimean side, Russia plans a modern, four-lane highway running the approximately 400 kilometers from Kerch in the northeast to Sevastopol in the southwest. The highway will pass through Feodosia, Bilohirsk (Belogorsk), the Crimean capital of Simferopol, and Bakhchisarai.

On May 12, local and Russian officials moved the inaugural shovelful of dirt on the $2.1 billion project outside of Belgorod. The road is currently scheduled for completion in 2020.

People in Kerch and other locations along the planned route are already feeling the pain, however. Some 80 families from one Kerch neighborhood were forcibly relocated to new, hastily constructed apartments. But many of them complained to RFE/RL that the work wasn’t finished and that the construction was substandard. They complain of cracks in the foundations and walls, of leaking water producing mold on the walls, and of faulty sewage lines.

To make matters worse, although they moved weeks ago and their old homes have been made ready for the wrecking ball, they have not received ownership documents for their new flats. Officials say the paperwork will come later this month or, perhaps, in September.

In the Zaliv dacha community, local Tatyana Vasilevna owns a small plot that is slated to be razed.

"And they aren’t paying us proper compensation," she told RFE/RL. "We are upset -- and it is not just me. There are 17 of us. According to the land register, my plot is worth 480,000 rubles [$8,000]. But the officials assessed it at 313,000. What can I buy for that kind of money? I don’t understand how it can be. There is one price in the official registry but they dictate another to me! They are dictators!"

On the edge of Kerch, there is a prehistoric Slavic burial mound, or "kurgan." In May, researchers from the Russian Academy of Sciences studied the site and identified separate burial tombs for different families. The mound developed over a long period of time, merging gradually into a single kurgan. Although the researchers recommended additional excavations, the site is slated to be leveled for the new highway.

Across Crimea, so far, more than 100 land parcels and/or buildings have been seized. In the village of Sovhozne, 20 local families have lost their homes, while other locals are concerned about the pollution and noise that the new highway will bring.

Abdureshit Dzhepparov, coordinator of the Crimean Contact Group for Human Rights, says the highway construction could be an ecological disaster for the peninsula. He worries that local residents and businesses will try to cash in by providing gravel and other natural resources for the project without any controls from officials focused on delivering Russian President Vladimir Putin’s highway on time.

At the end of July, officials published a list of about two dozen unofficial memorial crosses placed at the scenes of traffic crashes that will also be removed and requested that families take them down by the end of August.

"If they are not taken down, they will be removed and recycled," the Russian-installed administration’s statement said. "When the deadline expires, no complaints on this matter will be accepted."