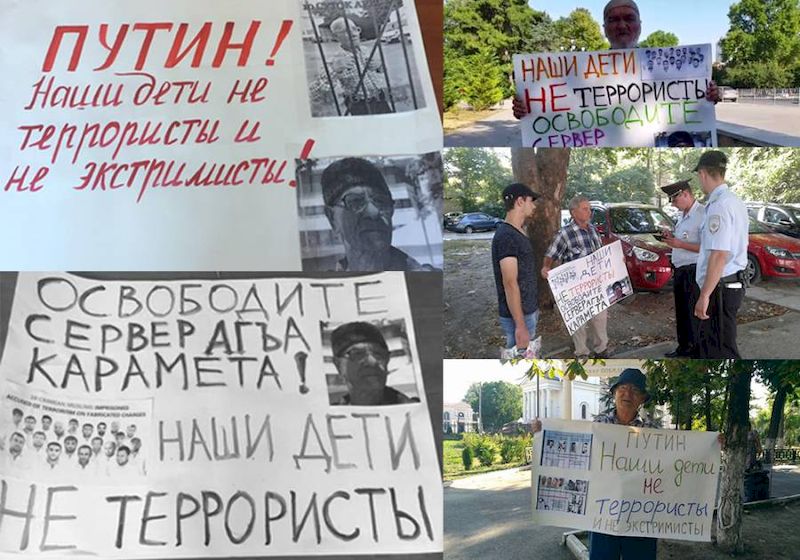 At least eight people were detained in Russian-occupied Crimea on August 14 for holding peaceful single-person pickets, or for photographing the police detaining the picketers. One of them - 64-year-old Yarikul Davlatov – was later fined 10 thousand roubles, with the ‘judge’ again happy to ignore the lack of any legitimate grounds.  For many Crimean Tatars there was no choice but to come out onto the street, after the unwarranted arrest and jailing last week of 76-year-old Server Karametov.  Like him, all the picketers held signs stating clearly: “Putin, our children are not terrorists!  They are not extremists either!”.

The men, who were in their sixties or older, stood peacefully near the High Court in Simferopol, the Kievsky District Court, the Simferopol City Council, and the central police department.  63-year-old Sinaver Nimetullaev explained that he had felt he did not have the right to sit at home while his people are facing such measures.

He and Reshat Useinov were both detained while standing with their placards, while Artem Osipov, who had been videoing the pickets, was also forcibly taken to the station.  So too  was human rights activist Lili Hemedzhy. She spoke to CrimeaSOS from the Central police station while they were waiting to be summoned  They had been told only that the police wanted to get explanations as to why they were holding pickets.  The police had come up to the men, videoed their picket and asked questions about its purpose and what they were trying to tell people through it..

Osman Ablaev was detained while standing with a placard near the police headquarters.  He and a young man, named only as Remzi, were taken to the Kievsky police station to draw up protocols.  They were later released, without administrative charges being laid.

All of the above were finally detained, having refused to answer the police questions.

64-year-old Yarikul Davlatov was detained while standing with a placard near the High Court in Simferopol.  Three other men  – Alexander Dyachkov, Seytumer Seytumerov and Selim Teifukov, were also taken to the police station for simply stopping to take photos. 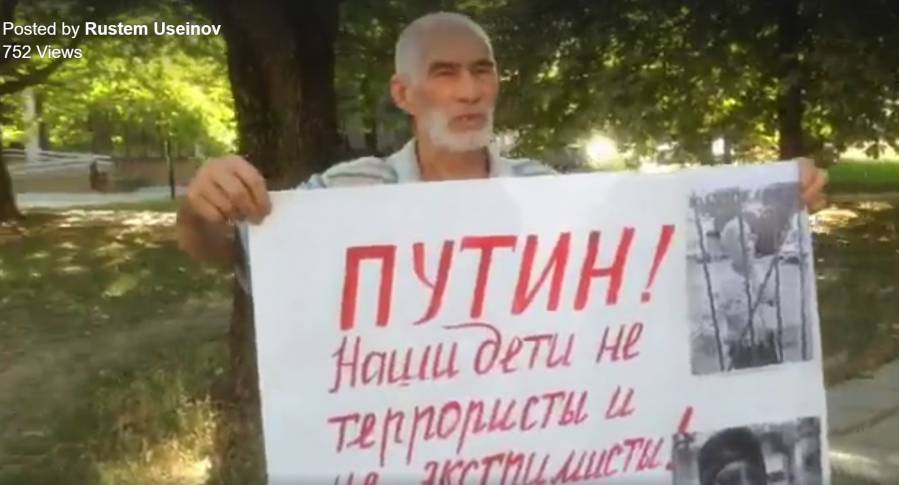 They were at least released, while Davlatov remained in custody and was then taken to the Zhelezhnodorozhny District Court to face administrative charges.  He himself rejects the claim that his picket was an ‘unauthorized meeting’.  Single-person pickets even by the repressive anti-protest laws which Russia is illegally imposing in occupied Crimea are legal, and, as Davlatov points out, there are no signs to indicate where the boundaries of the High Court territory begin.  The same point was made in the court by lawyers Emil Kurbedinov and Edem Semedlyaev.  As usual, such details as how the police had determined that Davlatov was on the court’s territory were ignored, and other applications from the defence rejected by ‘judge’ Maria Viktorovna Domnikova who found the pensioner ‘guilty’ and imposed a 10-thousand rouble fine.

76-year-old Server Karametov remains jailed, despite the absurd charge of ‘resisting the police’ and many serious health issues.

As reported, the frail pensioner was detained on August 8 while holding a peaceful solitary picket outside the High Court in Simferopol where one of Russia’s most lawless ‘trials’, that of Akhtem Chiygoz, was coming to an end.

All video footage and photos show clearly that the elderly Crimean Tatar had not obstructed the way, and was simply standing with a placard reading “Putin, our children are not terrorists!”  He was detained by at least three officers, one of whom was videoing the entire detention, and physically manhandled when he refused to leave.

‘Judge’ Marina Vladimirovna Kolotsei first fined him 10 thousand roubles for supposedly infringing the rules for holding a picket.  Then, on August 9, having been presented with all the medical documentation which proved why any incarceration could seriously exacerbate his condition, Kolotsei jailed him for ten days.

Natalya Anatolyevna Terentyeva from the High Court in Simferopol on August 11 claimed to see no grounds for overturning the jail sentence.