Russian invaders remove Ukrainian language and literature from schools Instead of obeying UN Court, Russia fabricates show trial to label Crimean Tatar Mejlis ‘terrorist’Ukrainian volunteer asphyxiated, beaten and half-starved in Russian ‘filtration’ concentration camp“He lay on the sidewalk, naming towns and cities in Ukraine”. A digest of anti-war activities in Russia, 23-29 July“Let’s Fight the Propaganda Together” Anti-war Activities in Russia, 9-16 July 2022“Do You Still Want This War?” Anti-War Activities in Russia, 3-9 July 2022Former HR Ombudsman Lyudmyla Denisova on her dismissal, 4 years of work, Ukrainians in occupied areasWhat ‘denazification? Russian neo-Nazis used to fight Moscow’s war to destroy Ukraine Disappearances in the Zaporizhzhia Region (24 February to 18 June 2022)Russian invaders torture abducted Kherson patriot into ‘confessing’ to surreal ‘abduction plot’ Russia jeopardizes life of Crimean Tatar veteran activist imprisoned for defending political prisoners Chief Russian propagandist: “All our hope is pinned on famine” ‘People flew in the air like leaves — there was such a strong explosion’Russian medics acknowledge that 60-year-old Crimean Tatar political prisoner’s life is in danger Crucial judgement for Jehovah’s Witnesses as Russia tries to deny ECHR jurisdiction for its war crimes in Ukraine “We can"t clean ourselves from the blood” – digest of Russian protestsRussian prosecutor demands 20-year sentence on ‘fantasy charges’ against Crimean Tatar political prisoner Monstrous sentences in Russia’s war against Crimean Tatar civic activists and their children‘The bodies were lying in the street. Broken. Pieces. Blood...’ Even in Russia, Putin’s ‘denazification’ claims prove no excuse for war against Ukraine
• Topics / News from the CIS countries 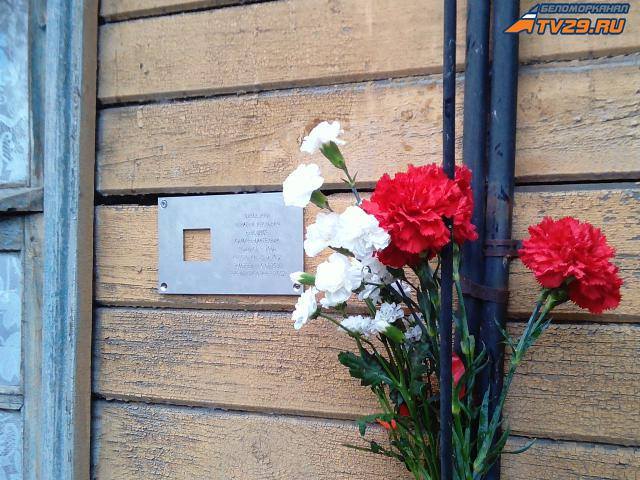 In yet another move in Russia to silence those telling the truth about the Great Terror and Stalinism in general, Dmitry Kozlov has been fined for erecting a Last Address plaque, part of the civic initiative honouring the memory of individual victims of the Terror.

Kozlov’s lawyer Ivan Pavlov explains that the Arkhangelsk building on which the plaque was placed is in a terrible state, and has been marked for demolition.  The plans to remove it altogether did not bother the Inspectorate for Sites of Cultural Heritage even though this is a listed building.  The latter objected only when Kozlov erected the Last Address plaque measuring 11 x 19 centimetres and informing that the building was the last home, before he was arrested and shot in 1937, of Ignatiy Bezsonov, one of the countless ‘ordinary’ victims of the killing machine of those years.  The Last Address activists had obtained the consent of all the residents of the building before going ahead.

He explained earlier that the Last Address coordinators had sent notification that they were planning to erect the plaque, but the Inspectorate staff had claimed that Kozlov had not provided enough information, for example, as to how it would be erected (with four extremely small screws, incapable of damaging the building), and administrative proceedings were initiated.

The fine could have been as high as 200 thousand roubles, so it is some relief that the court imposed the minimum sum under the article of the code of administrative offences.  The judge was not, however, prepared to throw the case out, even though it is open knowledge that residents are being moved out in preparation for demolition next year.  Journalist Sergei Parkhomenko writes that the initiative group had even wavered as to whether they should hang the plaque on a building awaiting demolition.  They decided to go ahead, but remove the plaque in time in order to reinstate it on the building to be erected on the site.

Pavlov will be appealing the very acceptance that an administrative offence was committed and the fine.

This is the first local attempt to use the courts against the important Last Address initiative, but by no means the only attack on those in Russia seeking to honour the victims of the Terror and not ‘rehabilitate’ murderous dictator Joseph Stalin.

There has been a radical change in Russians’ attitude to Stalin and the crimes of the Soviet regime since ex-KGB officer Vladimir Putin came to power 18 years ago. If in 2001, soon after Putin first became President, the majority of Russians were still negative in their assessment, in January 2017  46% viewed him “with admiration, respect, or liking” (4%, 32% and 10%, respectively).  The results of that Levada Centre survey and others are hardly surprising when Culture Minister Vladimir Medinsky has spoken positively of the place the dictator holds in the country’s memory and Olga Vasilyeva, Putin’s recent choice for Education Minister, is known for an extremely specific view on Stalin and for remarks denying the number of his victims.  The reappearance of portraits and busts of Stalin reached a crescendo in 2015 around events marking the 50th anniversary of the end of World War II, and it is interesting that the results show an even more positive view now.

2017 marks the 80th anniversary of the Great Terror and the imprisonment on evidently trumped-up charges of 61-year-old Yury Dmitriev, a renowned historian and the head of the Karelia branch of the Russian Memorial Society.

Dmitriev is well-known in Ukraine for his role in uncovering the mass graves at the Sandarmokh Clearing in Karelia, including those of 1,111 prisoners of the Solovky Labour Camp who were executed ‘by quota’ between 27 October and 4 November 1937.  The 290 Ukrainians murdered included playwright Mykola Kulish, poet Mykola Zerov and very many other prominent artists, scientists and public figures.

Dmitriev and the Memorial Society have been actively seeking to reveal information about the perpetrators of the Terror, all of which has made them enemies among those currently in power.

This shameful trial is continuing at present.  See details here: