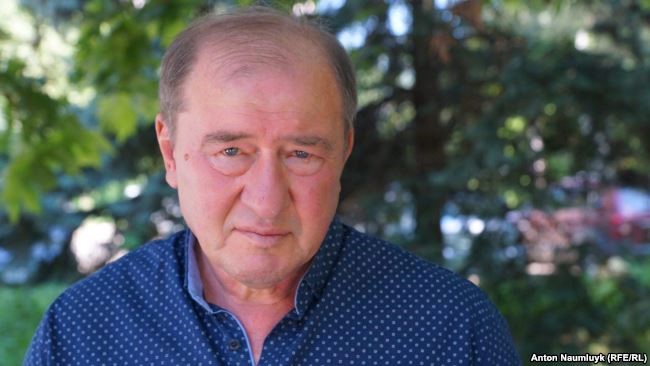 The authoritative Moscow Guild of Linguists has totally demolished an FSB-commissioned ’linguistic assessment’ used to back extraordinary ‘separatism’ charges against Crimean Tatar leader Ilmi Umerov.  60-year-old Umerov is facing a possible five-year sentence for supposed ‘public calls to action aimed at violating Russia’s territorial integrity’.  The charges pertain to an interview in which Umerov indicated disagreement with Russia’s occupation of Crimea and spoke of international sanctions, with the FSB ‘expert’ detecting such public calls in a flawed translation of a language she does not understand.

The Guild of Linguists’ report was presented to the court at the last hearing on August 16.  The defence’s application for it to be added to the case was entirely legitimate, but then so are all the applications in these political trials, and most get rejected.  This time, despite the prosecutor’s objections, the judge allowed the report to be added.  There seems less chance that the court will agree to a re-assessment, although the report makes it quite clear that one is required.

The FSB’s ‘assessment’ of the interview given by Ilmi Umerov in March 2016 in Crimean Tatar was provided by the Russian Security Service’s ‘linguistic expert’, Olga Ivanova.  Her flawed assessments are being used as the basis of two political trials at present – that of Umerov, and of journalist Mykola Semena who is facing identical charges also for opposition to Russia’s annexation of Crimea.

Ivanova’s expertise was demonstrated during a recent hearing into the charges against Semena where she claimed that the use of a modal verb (‘must’, for example) is sufficient to call something a ‘public call to violate Russia’s territorial integrity”.

This extraordinary assertion is of relevance to the charges against Umerov since one of the ‘incriminating utterances’ has essentially been doctored in the supposed translation with a modal verb added.

Umerov was speaking about international sanctions and how these should be strengthened.  It was the sanctions that would force Russia to leave Crimea and Donbas.  The translator added the modal “it’s necessary to”, thus claiming falsely that Umerov had said that Russia must be forced to leave Crimea.

At one of the previous court hearings, the translator K. Saledinov tried to slip the modal verb in and was caught, with Umerov demanding that he state clearly whether he had heard the word or not.  Saledinov tried to ignore the question.  When it was repeated by the judge, this alleged translator falsely claimed that “that you can put it in, or not put it in”.

As defence lawyer Mark Feygin responded, you can also “sentence somebody to five years, or not sentence them”.

It seems clear that the FSB was determined to find ‘public calls’, and that the lack of a transcript is no accident. Although Ivanova does not know Crimean Tatar, she was probably aware of the deliberate distortion of the words since avoids mentioning the highly pertinent fact that her assessment was not based on the original text, but on something that could only very loosely be called a translation.

The Guild of Linguists’ report notes that Ivanova’s assessment from August 22, 2016 had not reflected part of the original data, with this placing the objectivity of the assessment in doubt.

The prosecutor argued hard against the Guild of Linguists’ report being included, and it is quite understandable why.  The report incriminates all those who have taken part in this grotesque pretence of a trial.