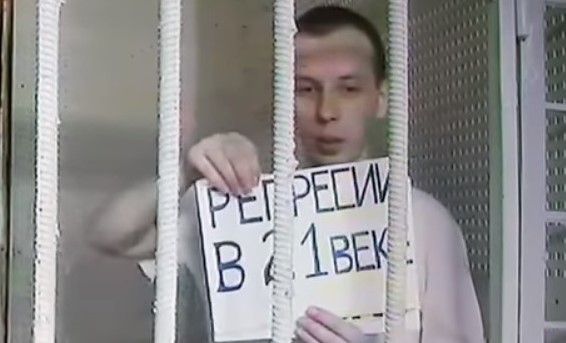 Ruslan Zeytullaev has, fortunately, ended the hunger strike declared in protest at his increased sentence and the persecution of the Crimean Tatar people, but for a worrying reason.  The 31-year-old Crimean Tatar, whose release has been demanded by European bodies as well as human rights NGO’s is being sent to the Russian republic of Bashkiria (Bashkortostan) thousands of kilometres from his wife, three small children and elderly mother.  If the conditions in the remand prison in Rostov are bad, those during the grueling journey are even worse, and it would be an act of suicide to continue the hunger strike

The plan to imprison him so far from Crimea is in direct breach of a European Court of Human Rights judgement which is binding upon all member states, including Russia.  In the Case of Polyakova and others vs. Russia, the Court in Strasbourg considered four cases where prisoners had been held between 2 and 8 thousand kilometres from their homes, and stated unequivocally that imprisoning people thousands of kilometres away from their families is a violation of their right to family ties.

The four prisoners which that judgement concerned were Russian.  In Zeytullaev’s case, as well as those of Ukrainian filmmaker Oleg Sentsov, civic activist Oleksandr Kolchenko and many others, Russia is also in breach of the Fourth Geneva Convention and international law in general.  It has no right to try people according to Russian legislation in illegally-occupied Crimea and it has sentenced Zeytullaev to 15 years’ imprisonment for unproven involvement in a peaceful organization which is legal in Ukraine.

Alyona Savchuk reports that Zeytullaev, who has been held up till now in Rostov (in Russia) is in reasonable health considering that he had taken no food at all since July 27.  He has no intention of giving up and has written a formal rejection of Russian citizenship.  He asks the Ukrainian foreign ministry to not forget him, and for people to keep writing to him (an address will be added here as soon as his address is known).  Even just a couple of lines are an important boost, and tell him that he’s not forgotten.

Zeytullaev and three other Crimean Tatars were the first Ukrainian Muslims to be arrested after Russia’s invasion and annexation of Crimea, but there are now 15 other men facing similar charges and held in indefinite detention.

Zeytullaev was working in construction when arrested, and was also active in his local community in Orlyne, on the outskirts of Sevastopol.

He was arrested, together with Rustem Vaitov and Nuri (Yuri) Primov on January 23, 2015, with Ferat Saifullaev taken prisoner in April that year.  All were held in custody far from their families, and there were gross irregularities even during the detention hearings.  The four men were prevented from being represented, as they wished, by lawyer Emil Kurbedinov, who was allowed only to defend Zeytullaev.  There were overt attempts to intimidate people coming to the detention hearings to show solidarity, with a police officer even wandering around videoing those present.

It should be mentioned that, having failed in this way, to intimidate families, friends and others coming to show solidarity, the Russian occupation regime has now made even detention hearings closed.  The detained men’s children are often even forced away from the ‘court’ as they stand, waiting and hoping to see their fathers as they are brought to the court.

The charges pertained solely to alleged but unproven involvement in Hizb ut-Tahrir, a  peaceful pan-Islamist organization which is legal in Ukraine (and other countries) and is not known to have committed an act of terrorism or violence anywhere in the world.  Russia’s decision in 2003 to declare it ‘terrorist’ was unexplained and taken in secret to avoid it being challenged.

The FSB was, however, not having this.  Their plot needs one person to be ‘organizer’, and the sentence was challenged as ‘too light’.

A second panel of judges proved more obedient, though after an equally flawed trial and with the same lack of evidence, they still sentenced Zeytullaev to 12 years, not the 17 demanded by the prosecution.  The prosecutor  challenged that ruling as well and on July 27,  Russia’s Supreme Court added three years to the sentence.