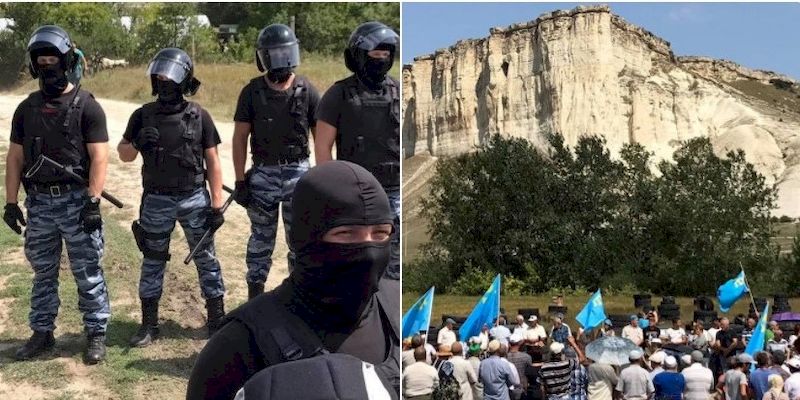 In typically heavy-handed measures on August 20, Russia used armed and often masked enforcement officers to prevent an entirely peaceful gathering dedicated to the thirtieth anniversary of important protests in Moscow in 1987 that alerted the world to the persecution Crimean Tatars were facing.  The armed men proved capable only of moving the location of the meeting and were unable to stop a  hard-hitting resolution warning of the clear similarities with Soviet persecution of Crimean Tatars  and the very real danger faced now, under Russian occupation, to the right to self-determination of the main indigenous people of Crimea.

The meeting had been planned on August 20 at the ‘Cowboy’ Sanitorium in a village near Belogorsk.  None of the normal excuses for demanding that people get permission for a gathering applied:  the meeting was planned far from the city and you could not claim that public transport and roads could be obstructed.  Nor was the meeting ‘political’ in any normal sense of the word.  The ‘dissident’ element lay in the obvious analogy between the rights issues addressed during the protests in 1987 and those confronting the Crimean Tatar people under Russian rule.  The participants included many elderly veterans of the national movement, as well as families with children.

Perhaps that was the reason why the occupation authorities initially resorted to a feeble excuse, claiming that a search was being undertaken of the sanitorium, supposedly because of a warning that a bomb had been planted.

The pretext did not work.  Bekir Umerov, a key participant in the 1987 events (and brother to Ilmi Umerov), told the armed officers that they would wait until the search was over and asked when they should postpone the beginning of the event until.

One of the men replied: “till better times”, to which Bekir Umerov responded that better times usually come with a change in president or general secretary (of the Communist Party in the Soviet era).

The armed officers decided to believe that the veteran of the national movement was somehow seeking the death of Russian President Vladimir Putin and detained him.  He was hauled off to the police station where they threatened to initiate criminal proceedings for supposedly ‘insulting’ a high-ranking public figure. He refused to sign any documents, and was finally released, but was warned that there would be proceedings later.

The other participants in the meeting did not wait for ‘better times’ and the end to the fictitious search, and unfurled their Crimean Tatar flags and began the Dua, or collective prayer, near the entrance to the sanitorium land.  .

At this point all pretence was dropped, and the participants were told through a loudspeaker that this was an ‘unauthorized meeting’ and that they were supposedly in breach of the relevant article of Russia’s code of administrative offences.  They were given ten minutes to leave, and told that otherwise they would be dispersed. There were many elderly people there, as well as families, and it was decided to hold both the prayers and the discussion part of the gathering on the territory of the Mosque at Sary-Su.

Later, some of the participants also took part in a Dua for Server Karametov, the 76-year-old pensioner with serious health issues who was released on August 19, after 10 days’ imprisonment for his peaceful picket in support of imprisoned Crimean Tatar leader Akhtem Chiygoz.

It is not guaranteed that the heavy-handed measures on August 20 were because somebody in Russia’s FSB (or the Kremlin) knew about the protests in Moscow in 1987.  After all, Russia began banning remembrance gatherings three months after its invasion and annexation of Crimea.  On May 18, 2014, it tried to stop any  gatherings in memory of the victims of the 1944 Deportation of the entire Crimean Tatar people, and there have been detentions every year on that most bitter of anniversaries.

The meeting did, however, pass a very hard-hitting resolution drawing clear analogies between the persecution faced by Crimean Tatars in 1987, and those now.

In the resolution , the participants recalled the circumstances behind the protests of 1987, the constant infringements of Crimean Tatars’ rights, and not only in the ban on their return to their Homeland.  Activists were subjected to searches, arrests, with the use, among other things, of punitive psychiatry.

Thirty years later, Crimean Tatars find themselves in a similar situation.  Crimea was included within the Russian Federation against the wishes of the Crimean Tatar people and this places their right to self-determination in jeopardy.

The socio-political situation in Crimea is marked by repression from the Russian state for dissident thinking, by violation of universally recognized human rights and the rights of indigenous peoples; by the lack of legal guarantees ensuring the free and harmonious development of the Crimean Tatar people; by incitement to xenophobia against Crimean Tatars.  All this poses a real danger to the Crimean Tatar people, their rights and freedoms, and results in discrimination."

The authors of the resolution affirm the Crimean Tatars’ unwavering aspiration for self-determination using the methods enshrined in international law, and stress their respect for the rights of all other people living in Crimea.

The crucial events of the summer of 1987 during Mikhail Gorbachev’s ‘Perestroika’ are worth recalling.  The Crimean Tatars had been living in exile for decades and a number of activists from the national movement came to Moscow in June 1987 to seek a meeting with the Soviet leadership and a decision on their return to their native Crimea.  According to historian Gulmira Bekirova, around 1,100 Crimean Tatars had arrived in Moscow by July 30.

They were met by a member of the Soviet Presidium, Pyotr Demichev, but only really to be fobbed off .

On July 6, around 120 Crimean Tatars held a demonstration on Red Square, with placards reading: “Return our people to their homeland”; “Reinstate the rights of the Crimean Tatars” and “Democracy and openness are for Crimean Tatars too”.

Plain-clothed KGB men removed the placards and tried to drive the protesters away, however the latter sat on the ground and refused to leave.

The protests continued, with around 500 gathering on Red Square on July 25.  150 Crimean Tatars even remained there through the night, and the next day the protesters dispersed only after agreement was reached that they would be received by Andrei Gromyko, then the Head of the Supreme Soviet.  At one of the protests there were as many as 900 Crimean Tatars.

This would have been unheard of in Soviet times had it not been for Perestroika.

In Crimea under Russian occupation it is even more inconceivable.

Although the delegates were eventually forced out of Moscow, and large-scale return of Crimean Tatars to their homeland became possible only after Ukraine’s Independence, the protests were of major importance.

Bekirova explains that they demonstrated the unprecedent organization of the Crimean Tatar national movement, and had several other very positive effects.

The Crimean Tatar question became an issue of international significance with it raised at most international meetings and symposia on human rights.

The number of people understanding and supporting the Crimean Tatars in their aspirations grew enormously.

As Russia continues illegally occupying Crimea and the number of victims of political repression rises, all of this has taken on poignant and very real immediacy.