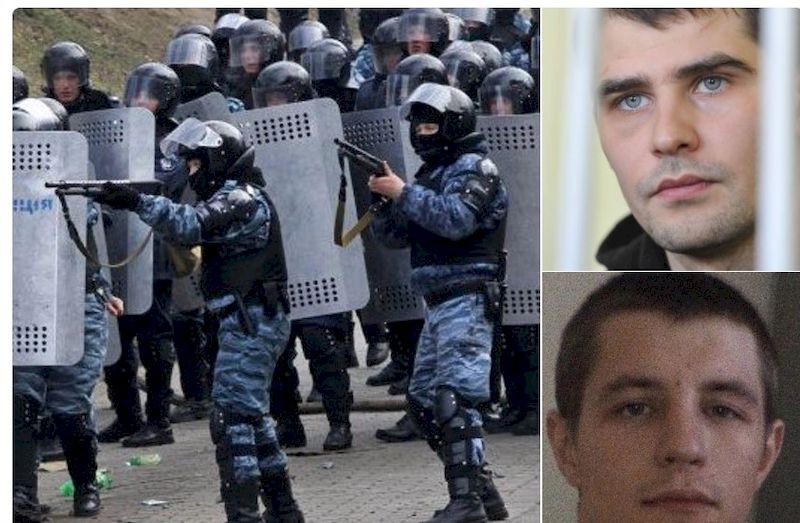 The statistics speak louder than any preamble.  Ten of the 23 ex-Berkut riot police officers suspected of gunning down protesters in the last days of Euromaidan have received Russian citizenship, while a further two men have been given ’refugee’ status. The Kremlin-backed militants in Donbas, whose position in all such matters is dictated by Moscow, recently added three ex-Berkut officers charged with the deaths to their list of people to be handed over in exchange for Ukrainian POW and civilian hostages.  Those figures were reported before another suspected killer Vitaly Honcharenko and three other former Berkut officers fled to Russia in April 2017.

There is no reason to believe that Russia is unaware of the role played by these men and other former Berkut officers.  Quite the contrary, since two men wanted by Ukraine for crimes against Maidan activists have been spotted in Moscow helping the regime of Russian President Vladimir Putin crush protest at home.   Among the photo depicting the violent suppression of peaceful protest in Moscow on June 12, 2017 was one showing a man dressed in Russian OMON riot police uniform but the spitting image of Serhiy Kusyuk whom Ukraine would like to try for his leading role in the bloody dispersal of Maidan activists on November 30, 2013.   Kusyuk was then the Berkut unit commander in charge, while Petro Fedchuk, who is also wanted for his role during the suppression was the deputy head of the Kyiv police.  He, or his double, was seen on December 30, 2014 in Moscow, during a protest against the sentences passed on leading opposition politician Alexei Navalny and his brother Oleg.  His face can be seen at 8.38 minutes into the video here: https://youtube.com/watch?v=P17kbMAtDFg.

Ukraine’s Berkut units were disbanded after Maidan precisely because the units had been so discredited by their violent suppression of the protests.  Some of the Crimea Berkut unit who betrayed their oath after Russia’s invasion and annexation of Crimea have since helped Russia to imprison Ukrainian activists in trials of astounding lawlessness.

Two men are currently imprisoned in Russia for unprovable ‘offences’ which they are supposed to have committed in the capital of Ukraine before Russia’s invasion of Crimea.  Judging by the promises of the de facto prosecutor installed on Russia’s invasion, considerably more such ‘prosecutions’ were planned.  Natalya Poklonskaya was ‘elected’ to Russia’s parliament during the last elections illegally held in occupied Crimea, and the subject seems to have been dropped.  The two cases, however, make it abundantly clear that no Ukrainian who took part in Maidan should consider going to Crimea while it remains under Russian occupation, and they travel to Russia at great risk also.

The court ignored both the surreal absurdity of the indictment and Kostenko’s retraction of his initial ‘confession’.  On May 15, 2015,  judge Viktor Mozhelyansky from the Kievsky District Court in Simferopol found Kostenko guilty of both charges, and sentenced him to four years imprisonment.  The sentence was later reduced to 3.5 years.  The Memorial Human Rights Centre soon afterwards declared Kostenko a political prisoner.

The trial of 22-year-old Kolomiyets on June 10, 2016 sent a particularly chilling message to all Ukrainians since the young man was effectively abducted from Russia and taken to Crimea.  The young man was sentenced to 10 years in a maximum-security prison with the main ‘offence’ something which almost certainly never happened, but over which no Russian court could have any jurisdiction.  Unlike Kostenko, there was nothing to link Kolomiyets with Crimea.  He is from the Kyiv oblast, and was living in the North Caucasus with his partner, now wife Galina and her children.  He was seized by local police on May 15, 2015, tortured, and then taken to Crimea.

Kolomiyets was charged with ‘attempted murder’ of two Ukrainian Berkut officers during the Euromaidan protests in Kyiv.  It was claimed that he had thrown a Molotov cocktail at the men which “caused them pain”.   They had never made any complaint at the time, nor sought medical treatment, yet two and a half years later they both claimed that they remembered Kolomiyets and “their pain”. The prosecution was under Article 30 § 3 and 105 § 2 of the Russian Criminal Code, namely “attempted murder of 2 or more people in connection with their official activities … out of motives of political and ideological hatred”.

Kolomiyets was sentenced to 6 years on the ‘attempted murder’ charges and 4 years over the hashish charge.

Any letters are an important message to them – and to Moscow – that they are not forgotten.

Letters need to be in Russian, and on totally ‘innocuous’ subjects.  If that is a problem, please just copy-paste the message below.  Letters need to weigh no more than 100 g. or they simply won’t be delivered, and it’s a good idea to give your return address, since they may well want to reply.

Oleksandr Kostenko  It is better to call him Sasha or Alexander (the Russified version of the name, since the prison authorities will use any excuse to refuse to pass a letter on).