Return to Selective Justice Feared in Ukraine over Prosecution of Anti-Corruption ActivistMystery tax probe condemned as more pressure on Ukrainian anti-corruption NGOsUkraine’s prosecutor investigates journalist, not the corrupt judges he exposedJournalists under investigation for divulging judges’ rulings from foreign beachesRigged and Secretive Fight against Corruption?Government accused of rigging anti-corruption selection commissionHead of Traffic Police Dismissed after Scandalous Lifestyle ExposedIt’s Tax Time In Ukraine, And Financial Discrepancies Suggest Corruption EnduresBehind the declarations: how public officials lived – and live nowParliamentarians’ secrecy regarding income given judicial OKVerkhovna Rada and Constitutional Court least willing to divulge public informationCourt rejects Verkhovna Rada claim that staffing details are not for the publicOPORA takes secretive Verkhovna Rada Office to courtCHESNO: Office of the Verkhovna Rada flagrantly violating Public Information ActUkrainska Pravda takes parliament to court over concealed informationResidences of Azarov, Lytvyn and Yushchenko to cost the taxpayer 50 million UAHCourt has no problem with parliament not handing over MP’s declarationsVerkhovna Rada Office refuses to hand over Deputies’ declarationsPublic Information Law like a Bolt from the Blue for the AuthoritiesCVU: Ukrainian authorities not ready to be open
• Topics / Law enforcement agencies 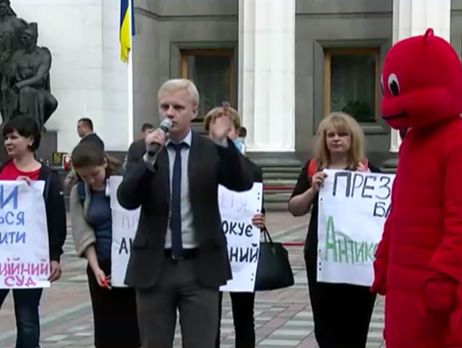 Transparency International in Ukraine has issued an alarming statement asserting that public reprisals against anti-corruption activists are gaining pace.  They call on activists to inform about all such cases “in order to inform international partners about the dangerous situation”.

TI calls the recent news of court proceedings against Vitaly Shabunin, head of the Anti-Corruption Centre [AntAC] “the most telling example of political pressure and selective justice”.  The prosecution is a continuation of the pressure placed on AntAC and “has become a public reprisal against an activist seen as inconvenient by the authorities”.

Yaroslav Yurchyshin, TI Executive Director, points out that none of the cases linked with Euromaidan or cases about obstruction of journalists carrying out their work have been investigated as swiftly as this prosecution of Shabunin, and that makes the latter appear a demonstrative reprisal.

It is not only TI in Ukraine that has expressed concern over the charges laid on August 16 against Shabunin.

As reported, Shabunin is accused of ‘causing bodily injuries of medium severity’ which could carry a sentence of up to three years.  This is over an incident in which he punched Vsevolod Filimonenko.

The punch is undisputed, unlike what provoked the conflict.  On June 8 this year Shabunin arrived at the military recruitment office following an unwarranted summons which may have been part of an ongoing campaign against Shabunin and AntAC, and one in which Filimonenko was involved.

Filimonenko was waiting and ran after him and can be heard on the video saying something about Shabunin’s accusation that he had upset Shabunin’s colleague Oleksandra Ustinova.

Shabunin had reported on August 15 that he was expecting the more serious charge of  “causing deliberate injury of medium severity to a journalist carrying out his legitimate professional activities”.

This provoked outrage among civic activists and journalists who insisted that Filimonenko is no journalist, and was rather acting as a paid provocateur.  With such a storm of objections, the prosecutor backed down and reduced the charge to ‘ordinary’ bodily injuries.

There were people who objected strongly to the fuss made about this case.  They believe that the charges are legitimate, and also that the dismissal of Filimonenko’s role as journalist as a very slippery slope.  Who is to determine whether a person is viewed as a ‘real journalist’ or not, and on what criteria?

Very many, however, disagreed, and saw this as a very dangerous form of selective justice.

The charges were laid shortly after those against MP Serhiy Pashynsky for having shot at somebody were, inexplicably, dropped.  The eagerness to bring charges of assault and especially of obstructing a journalist seemed especially suspect in the light of numerous cases where SBU [Security Service] employees or others have assaulted journalists with total impunity.

Nobody is suggesting that people should be allowed to go around punching others with impunity, however there must clearly be concern where some enjoy impunity when they carry out acts of violence which are potentially much more dangerous while a prominent anti-corruption activist who often criticizes those in power is immediately prosecuted.

Concern is only increased by the fact that this is only one of several unrelated attacks on AntAC.

In its statement, TI in Ukraine also mentions other activists, like Volodymyr Torbich from the Agency for Journalist Investigations who has complained of pressure from the SBU.  The letters from the SBU were received after an investigation into the origin of property owned by the current First Deputy Head of the SBU, Pavlo Demchyny.

Torbich views the SBU’s demand for comprehensive information about the financing of their project, which is not within its scope of activities, as unconcealed pressure.

TI notes that it has also run up against political pressure after it publicly demanding publication of the court ruling about confiscating money of ex-president Viktor Yanukovych.

It demands an end to all such abuse by law enforcement bodies of their powers and to persecution of activists.  It promises to monitor all such pressure on civil society and invites others to inform them of abuse by writing to [email protected]