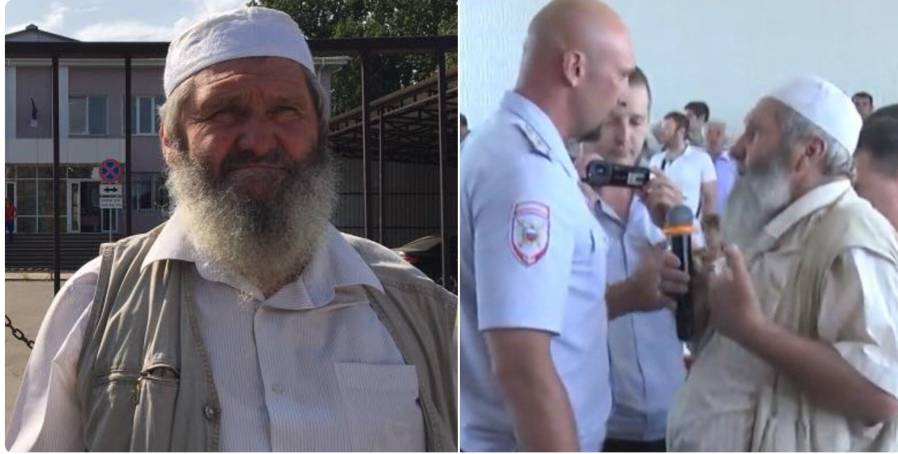 62-year-old Fazil Ibraimov, who suffers from Type 2 diabetes, has been jailed for five days in Russian-occupied Crimea, after attempting to speak out against building plans which are likely to deprive him and many other Crimean Tatars of their homes.  He was alleged to have ‘resisted the police’, the same charge as that used to jail 76-year-old Server Karametov for ten days over a peaceful picket in defence of political prisoners.

The public hearings took place in the premises of the Russian-controlled Simferopol City Council on August 5.  They were over plans to build a new residential complex called ‘Crimean Rose’ on the north-eastern outskirts of Simferopol on land which has been occupied by Crimean Tatars since 2005.  The clearing in question contains around 100 self-built structures built by Crimean Tatars who had returned to Crimea from exile, but found nobody in a hurry to allocate the land to which they were legally entitled.  The territory even has its own mosque with capacity for two thousand people.

Krym.Realii reports that a lot of the residents tried to attend the public hearings, but were stopped. Many were prevented by police who claimed that the hall was already full.  It was, however Simferopol activists observing the event say that a considerable number of seats were taken by staff from the ministry of sport and other officials.

Some were able to get in, however they all began receiving calls that heavy technology had arrived at the Strelkovaya Clearing and was getting ready to demolish homes.  Civic activist Ilya Bolshedvorov explains that a number did leave, and found some technology trying to pull down a home that was unfinished.  Bolshedvorov calls this pure provocation to ensure that the Crimean Tatars were unable to take part in the voting at the public hearings.

Fazil Ibraimov remained and tried to take the floor, explaining how the effective squats had arisen. Ibraimov’s lawyer Mammet Mambetov explains that the de facto Mayor Gennady Bakharev immediately tried to shut him up and eventually called the police to get him removed, with it claimed that he was trying to “turn the discussion into the rhetoric of a spontaneous protest”.

Some of the people with him came to Ibraimov’s defence, trying to get the police to not forcibly remove him and simply let him speak.  This was ignored, with the altercation then turned into Ibraimov’s ‘disobeying the police’.

He was taken away, with Bakharev effectively telling the others to sit down or they’d be removed also.

The video can be seen here.  It speaks in Ibraimov’s defence yet was used as part of a propaganda campaign on the main Russian-controlled TV channel trying to discredit him.

Bolshedvorov believes that the conflict with residents from the ‘protest clearing’ was also a planned provocation.  He notes that there were some people whose identity was unclear, but who were clearly trying to aggravate the situation.

The Crimean Tatar activists believe that the subsequent vote in favour of the ‘Crimean Rose’ complex was also falsely counted, with more raising their hand against the proposal.

The vote was still close with 154 supposedly in favour and 141 against.  Even without any fiddling with the vote count, the very fact that the hearings were effectively rigged, with public sector employees used to fill places to keep others out must put the results of the vote in question.

The charge of resisting the police was heard at the Zheleznodorozhny District Court on August 20.  The ‘judge’ was Maria Viktorovna Domnikova who on August 14 fined 64-year-old Yarikul Davlatov 10 thousand roubles over a single-person picket with a placard reading: “Putin, our children are neither terrorists nor extremists”.

Davlatov and several other Crimean Tatar pensioners had come out with such placards in solidarity with Server Karametov who had been sentenced to 10 days imprisonment for his protest under the same placard in defence of imprisoned Crimean Tatar leader Akhtem Chiygoz.  All those taking part in such pickets, which even under Russian draconian restrictions are legal, were detained, and Davlatov prosecuted.

Senior police lieutenant Andrei Vladimirovich Sergeyenko, the officer who detained Server Karametov and who claimed that the elderly man who has serious health issues was ‘resisting the police’ was again in court on August 20, making the same evidently absurd claims about 62-year-old Fazil Ibraimov.