Horrifically tortured and murdered, or imprisoned in Crimea and Donbas for the Ukrainian Flag 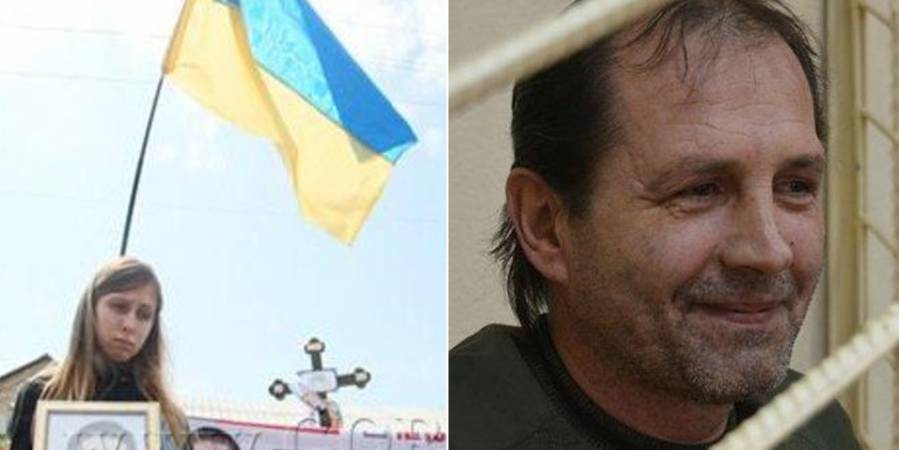 Ukraine marked National Flag Day on August 23 with at least three Ukrainians imprisoned in Russian-occupied Crimea or by the Russian-backed militants in Donbas for their commitment to the Ukrainian flag.  Our voices are needed to try to secure the release of Volodymyr Balukh, Vlad Ovcharenko and Artem Akhmerov, but also in remembrance of Volodymyr Rybak. He was tortured and murdered in 2014 for defending the flag and Ukraine against the militants who had seized control of Sloviansk under the leadership of former Russian military intelligence officer Igor Girkin and his heavily armed fighters.

Volodymyr Rybak was a member of the Horlivka City Council.  On April 17, 2014 he tried to remove the flag of the so-called ‘Donetsk people’s republic’ which the militants had hung over the seized council building.

The video here shows Rybak being stopped as he tried to enter the building, pushed and beaten, before being forced into a car and taken away by masked militants in camouflage gear.  He was almost certainly taken to Sloviansk which was already held by Girkin and his men.

His tortured and mutilated body was found 2 days later in a small stream outside Sloviansk, together with that of 19-year-old student Yury Popravka.

Volodymyr Rybak was 42, married with two children.  He had been a councillor, elected from the then opposition Batkivshchyna Party since 2010.

During the ceremonies marking 25 years of Ukraine’s Independence, the Ukrainian Flag was raised on August 23, 2016 by President Petro Poroshenko together with Volodymyr Rybak’s daughter.

“I am convinced that thanks to our unity and love for our native land,  that which Volodymyr Rybak struggled for to his last breath will come to pass. Ukraine will once again be whole. As my father said: “Our mouths cannot be silenced while we know the words of the national anthem, they cannot block our ears while we remember how it sounds, and nothing can close our eyes while the blue and yellow flag is before us”

Since that anniversary, a minimum of three Ukrainians have been seized and remain in captivity more or less directly over the Ukrainian flag.

As reported here, Vlad (Vladislav) Ovcharenko and Artem Akhmerov disappeared on October 10, 2016.   That evening 15 armed men, supposedly ‘LPR security service’ officials turned up at Ovcharenko’s home and carried out a search lasting around 3 hours.  They found nothing ‘prohibited’, but took his mother’s computer away.  Ovcharenko’s parents went to the ‘security service’ headquarters the following day.  The militants initially denied any involvement, but finally admitted that both young men had been detained.  The militants later said that they could face ‘prison sentences’ for what they called spying and treason.

On November 24, the militants staged another ‘pardoning’ stunt involving two ‘Ultra’ football fans, while threatening that Ovcharenko and Akhmerov could face 20-year ‘sentences’ for what the militants call “state treason and spying”, as well as ‘desecration’ of the LPR flag.

Volodymyr Balukh, a 46-year-old Ukrainian farmer and activist has been imprisoned since December 2016 on manifestly absurd charges.  He was arrested after an illegal search carried out with multiple irregularities during which 90 bullets and several trotyl explosive devices were supposedly ‘found’ in his attic.  The arrest came nine days after Balukh nailed a plaque renaming his home No. 18 “Heroes of Nebesna Sotnya St’ in memory of the over 100 Maidan activists who were killed during Euromaidan and rejected demands from the head of the local council to remove it.

Balukh had first raised the Ukrainian flag over his home during Euromaidan and refused to remove it after Russia’s invasion and occupation of his native Crimea.  He refused to take on Russian citizenship, and had faced several other implausible administrative charges before his arrest in December.

The charges were so clearly flawed that the Memorial Human Rights Centre declared Balukh a political prisoner well before the trial.

The de facto judge at the Razdolne District Court  - Maria Bedritskaya – ignored evidence of shocking falsification, and essentially worked hand in hand with the prosecutor, sentencing Balukh on August 3, 2017 to three and a half years’ imprisonment.