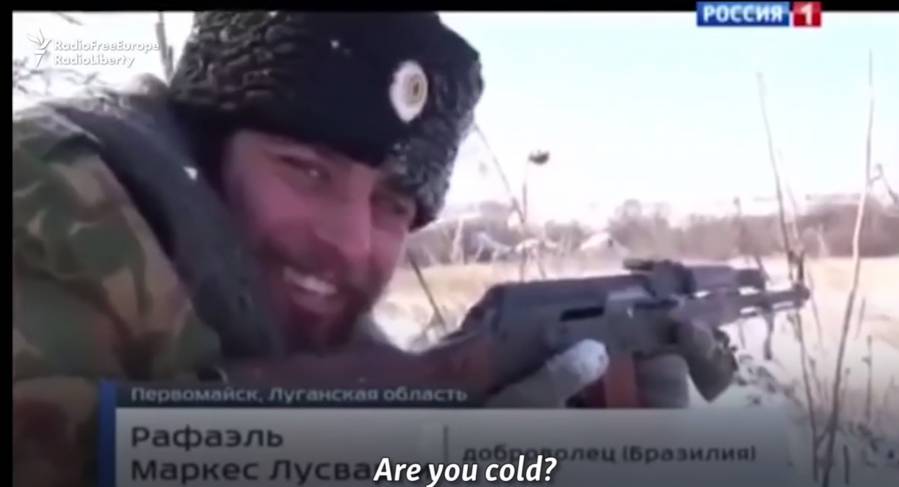 The Kyiv Court of Appeal has revoked  the conviction of Rafael Lusvarghi , a Brazilian national who played an active role in the Kremlin-backed fighting against Ukrainian soldiers in Donbas.  He had been sentenced to 13 years’ imprisonment, however the court on August 17 accepted the defence’s arguments regarding jurisdiction and the fact that the original trial had concentrated only on his admission of guilt, without consideration of the evidence or of his allegation of illegal force used against him.  Lusvarghi has been remanded in custody for a further two months while the case is sent back for further investigation and retrial.

Lusvarghi does not deny his part in the fighting from September 2014 to May 2015.  Nor could he deny this since he was frequently shown fighting on Russian propaganda channels and himself posted a mortar attack on Ukrainian soldiers on social media.  He recently told RFEFL that he had always been a great fan of Russia and a communist drawn to anything linked with the Soviet Union.  He claimed that he had come to Ukraine “to fight fascism”.  The report speaks of him having used his military experience in Brazil to lead other foreigners fighting against the Ukrainian government in Donbas.  It is unclear whether this is from Lusvarghi’s own words, however the 32-year-old can be heard saying that he became disillusioned, and talking of “bad people” and barbaric behaviour among the militants.  He also complained of the racism against people from Brazil and was disturbed by the neo-Nazi views of many of the fighters on the militants’ side. There is nothing, however, to indicate that he curtailed his activities until he was forced to by an injury to his leg and foot.

He had returned to Brazil but was lured back by the offer of work, with this proving to have been a planned trick by Ukraine’s Security Service [SBU].  He was seized on his arrival in October 2016 and has been in custody ever since.

The judges’ justification for the ruling was published on August 23.  The three judges agreed that the norms of legislation, according to which the Brazilian should have been tried at a specific court in the Dnipropetrovsk oblast, had not been followed, without legitimate grounds.

They also found that Lusvarghi’s right to defence had not been observed, concluding that he had not understood his rights when he agreed to the procedure set out in Article 349 § 3 of the Criminal Procedure Code. This states that the court can decide to not examine evidence of any part of the charges which are not disputed by either side, essentially those aspects that a person has admitted to.  The article does stipulate that the court must establish that the defendant fully understands what he is not disputing, that there is no doubt that the person’s admission or confession was made voluntarily, and that the person understands that he will not be able to appeal against any part of the charges that were not disputed.

During the trial, Lusvarghi asserted that he had been subjected to physical force, and asked for protection and for a medical examination. The judge was obliged by law to record such a complaint, and to order an investigation into the allegations.

The court, however, chose to ignore this and applied the above-mentioned Article 349 § 3 and also failed to ensure a medical examination.  The Court of Appeal cites the case-law of the European Court of Human Rights, according to which if the enforcement bodies cannot provide a reasonable explanation for a person’s physical injuries, and he or she later complains of torture, the court should conclude that there has been a violation of the person’s rights in view of the illegal methods of investigation applied.  Should the first instance court have issued a verdict based on such evidence / confessions, this must be quashed by the court of appeal.

There will doubtless be anger over the ruling, however it is likely that had a Ukrainian Court of Appeal not quashed it, the European Court of Human Rights might well have found in Lusvarghi’s favour on the same grounds.

The situation seems particularly absurd in this case given the apparent volume of incriminating evidence available to convict Lusvarghi of the charges he was facing.  The use of force to extract confessions Is unacceptable under any circumstances, but in a case such as this, it also foolishly jeopardized a conviction that should not have been in question.

As mentioned, Lusvarghi was seized by the SBU when he entered Ukraine in October 2016 and accused of involvement in the so-called ‘Bikini Battalion”, and of recruiting mercenaries to fight in Donbas.  On January 2017, the Pechersk District Court in Kyiv found him guilty under Article 258-3 § 1 of the Criminal Code (creating a terrorist group or organization) and  Article 260 § 2 (creating a paramilitary or armed formation not envisaged by law).