‘Only’ two Ukrainian activists were detained in Russian-occupied Crimea on Ukraine’s Independence Day.  That, however, was probably because most Ukrainians celebrated the day with family and friends.  As one Ukrainian put it, coming out to any kind of event could cost you your liberty.

The danger makes one appreciate the courage of all those Ukrainians in Sevastopol who came together for a photo to mark National Flag Day and Independence Day on August 23 and 24, respectively.  The photo was widely circulated on Facebook, and when even the many Ukrainians who lay flowers at monuments to Taras Shevchenko know that they are being videoed by enforcement bodies, this was no small thing.. 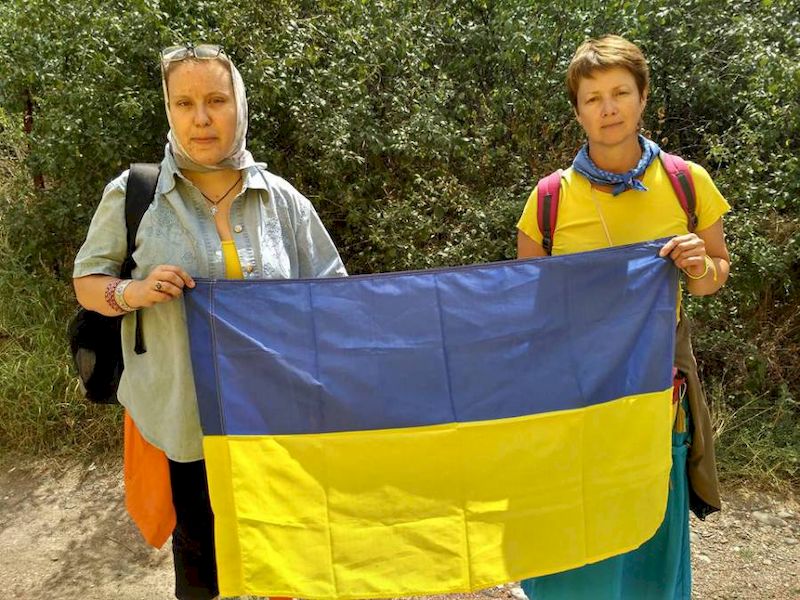 Halyna Balaban and Alyona Popova, two members of the Ukrainian Cultural Centre, were detained in the morning of August 24 at the Simferopol Railway Station.  They were stopped initially for smoking in a place where it’s not allowed, however that pretext could not warrant either their detention or the measures taken.  The two women were grilled about their attitude to Russia and their trips to mainland Ukraine, and were also forced, through threats, to allow their fingerprints to be taken.  They were, however, finally released without any charges being laid.

It should be noted that some members of the Ukrainian Cultural Centre, like Veldar Shukurdzhiyev, Natalya Kharchenko and her husband, Andriy Vinohradov, have been driven from Crimea over the last year.  Kharchenko, for example, who has two small children, was facing criminal charges in occupied Crimea for a photo with a Ukrainian flag on social media.

The original photo of Ukrainians gathered in Sevastopol to mark Ukraine’s Independence and National Flag Days which Tetyana Moskalenko post was, seemingly, deleted.  She reposted it later and noted that they can remove Facebook photos, but can never remove Ukraine from their hearts.

She was one of the Ukrainians from all over Crimea who joined in making a very powerful video for Independence Day, in which each read a part of the poem ‘Where are you now, the executioners of my people?’ by Vasyl Symonenko.  Those taking part included Archbishop Kliment, the Head of the beleaguered Ukrainian Orthodox Church under the Kyiv Patriarchate in Crimea; the wife of imprisoned Crimean Tatar leader Akhtem Chiygoz and Ilmi Umerov, who is also on trial for the supposed ‘separatism’ of saying that Crimea is Ukrainian.

Mykhailo Batrak, one of the participants, explained to Krym.Realii that the aim of the video was to “show that we are all Ukrainians, regardless of our national, ethnic, religious or other affiliations; regardless of whether we are in mainland Ukraine or in Crimea.”

They want Ukrainians in mainland Ukraine to understand that “despite the pressure and repression, there remain a huge number of Ukrainian patriots”.

During  a phone-in program on Krym.realii,  Serhiy, a Ukrainian from Sevastopol, explained that “according to Russian law going to any kind of event can result in loss of liberty. You can only hold single-person pickets, however pro-Ukrainian Sevastopol residents will definitely spend Independence Day in their own way. You particularly feel the difference between a free and an unfree state in present-day Crimea when you can be imprisoned for views different from those generally accepted, as was the case with Volodymyr Balukh”

Balukh was sentenced at the beginning of August to three and a half years’ imprisonment on openly absurd charges and essentially for the Ukrainian flag on his home.

Andriy Shchekun, a prominent Ukrainian activist, was abducted and brutally tortured in the first month after Russia’s invasion and has since been living with his wife and three children in Kyiv.  His feeling is that since the beginning of occupation, Crimea has become closer to Ukraine, and that far more people than we realize have begun seriously thinking about the return of Crimea to Ukrainian jurisdiction.

Russia based its major propaganda drive in early 2014 on lies about the imminent danger to Crimeans from Maidan and the new government in Kyiv after disgraced President Viktor Yanukovych fled to Russia, and on promises on wealth and prosperity.  Russia is currently bringing in large numbers of Russians (a tactic it has taken from Soviet times) and systematically using repressive methods to force out those loyal to Ukraine.  It is also quite simply impossible to find out what ordinary Crimeans want since they would be taking a risk to speak openly.  It must, nonetheless, be clear to very many Crimeans, even those who previously took a pro-Russian line, that Ukraine has not fallen apart and that none of Russia’s promised benefits have materialized.