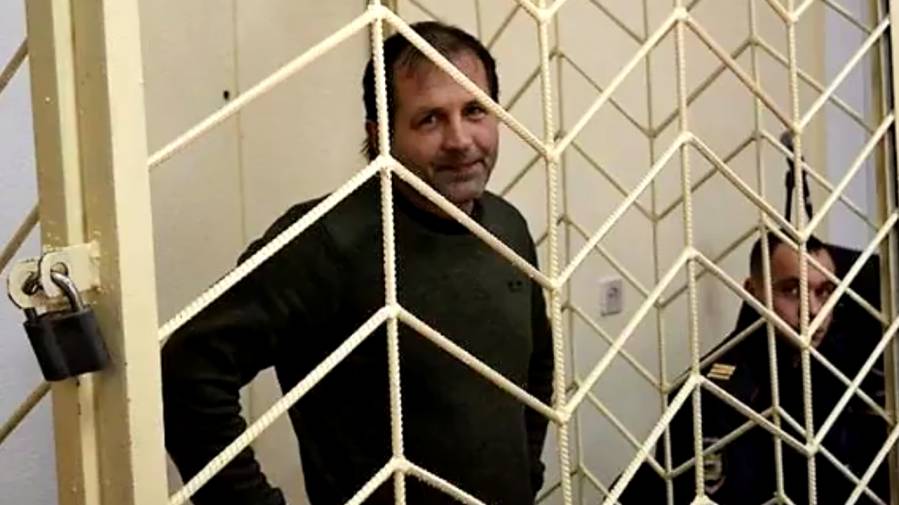 It seems a three and a half year sentence against Volodymyr Balukh for his Ukrainian flag in Russian-occupied Crimea was not enough. He is now facing new criminal proceedings brought after he complained about anti-Ukrainian abuse and physical violence from the head of the Razdolne detention centre Captain Valery Tkachenko.

The Crimean Human Rights Group reported that Balukh’s lawyer had lodged a complaint on August 12, over Tkachenko’s behaviour the previous day.  The lawyer explained that Tkachenko had hit Balukh and used foul abuse against him, insulting him for his Ukrainian nationality.  Most importantly, the lawyer noted, this had been recorded by the video camera in the detention centre.

The lawyer notes that the rest of the staff of this particular detention centre do try to comply with regulations, unlike Tkachenko.  Balukh first complained of the latter’s discrimination on the basis of people’s ethnicity on April 23.  This time the behaviour was even worse and provably unlawful.

Over two weeks after the complaint was lodged, Tkachenko has come up with his version of events which N. S. Bondarenko from the Russian Investigative Committee has chosen to believe.

With absolutely no consideration for plausibility, it is claimed that on August 11 during a morning inspection of the cells, Balukh hit Tkachenko in the stomach with his elbow.  He is then alleged to have gone into cell No. 2, taken a bottle of cleaning liquid and again hit Tkachenko on the right arm.

The latter was, according to this rendition of reality, entirely passive throughout the double attack on him, and saw no need to take any measures against Balukh who is totally under police control.

The Crimean Human Rights Group believes that this new criminal case demonstrates that the occupation authorities are not letting up on their persecution of the Ukrainian activist even now that he has been sentenced to three years and seven months on manifestly falsified charges.

Volodymyr Balukh was arrested on Dec 8, 2016 after an unexplained search which allegedly found 90 bullets and several trotyl explosive devices in his attic.  He had no record of violence and the constant searches and harassment he had faced since Russia’s invasion of Crimea for his openly pro-Ukrainian position made it inconceivable that he could have held anything illegal in his home.  This was one of the reasons why the Memorial Human Rights Centre almost immediately declared him a political prisoner.

Other reasons included the timing.  Balukh was arrested nine days after he nailed a plaque renaming his home No. 18 “Heroes of Nebesna Sotnya St’ in memory of the over 100 Maidan activists who were killed during Euromaidan.  He rejected demands from the head of the local council to remove it. He had also continued to fly the Ukrainian flag over his home, despite harassment and a few absurd administrative court proceedings.

The case was so obviously fabricated hat Balukh’s lawyer Dmitry Dinze expressly warned the ‘judge’ Maria Bedritskaya that a judge can face criminal liability for detaining a man on overtly falsified charges.  She ignored the warning, herself illegally initiated the extension of his detention after the prosecutor forgot, and speeded up the predetermined conviction in order to go on holiday.

She paid no heed, for example, to the fact that the officer Yevgeny Bobrov who had allegedly found the ammunition could not explain either his role or his legal status during the search. He had not been on duty that day, and he could not name the individuals who had instructed him to be present or their position in the law enforcement bodies.   He was also unable to explain why he had removed the Ukrainian flag.

The entire ‘trial’ was on this level (details here), yet on August 3, Bedritskaya found Balukh ‘guilty’ and passed the 3.7 year sentence.

This has been appealed, however as with all such politically motivated ‘trials’ under Russian occupation, the outcome of the appeal is also largely predetermined.  It is likely that the Russian occupation regime wants the case to be openly falsified.  All the more powerful and chilling a warning to other Ukrainians of what they can expect if they don’t keep their heads low.