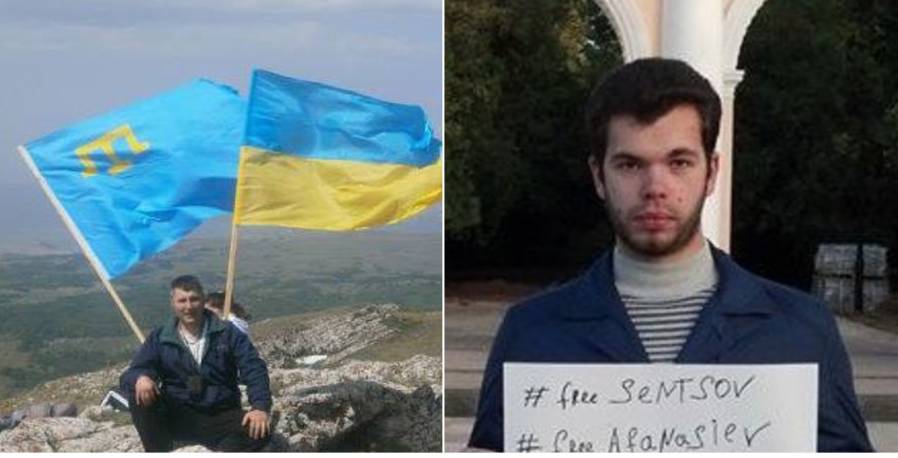 Leonid Kuzmin, the head of the Ukrainian Cultural Centre in Crimea has become the latest Ukrainian activist to be forced out of Russian-occupied Crimea after receiving both death threats and warnings that he could end up imprisoned.  In the light of the recent prison sentence passed on Volodymyr Balukh, ongoing trials and other reprisals for opposition to Russian occupation, there was every reason to see the danger as real.

The Ukrainian Cultural Centre had recently begun producing a publication called Krymsky Teren, which promised to write about things that the Crimean press does not cover or reports in an ideologically coloured manner.

It was while preparing the first issue of this newspaper that Kuzmin, as well as his relatives, began receiving phone and text messages containing threats.  The messages threatened that if he did not leave Crimea, he would end up jailed lie Balukh, or that he would not make it home.

It is hard to view this as just some private initiative from a pro-Russian crackpot since after the first issue was published, the FSB [Russia’s security service] got involved.  They “had chats” with Kuzmin’s relatives and claimed to them that Kuzmin was engaged in “dangerous activities” and could find himself facing charges of links with ‘Ukrainian saboteurs’.

Kuzmin has told the Crimean Human Rights Group that he decided to leave after those FSB threats, and set off on August 30.  During the check of his documents by Russian border guards he was stopped and grilled for some time about the purpose of his trip and his connections in Ukraine.  Kuzmin says that he was asked if he understood that he was carrying out “dangerous activities in Crimea”.  The officials also searched all of his possessions, before finally letting him through.  It was only then that he realized that they had taken all the money he had with him.

Kuzmin has long suffered harassment and even prosecution for his pro-Ukrainian position.  In March 2015, he was charged,, together with Veldar Shukurdzhiyev and Oleksandr Kravchenko, with administrative ‘offences’ after being detained at a totally peaceful gathering to mark the 201st anniversary of the birth of the Ukrainian poet Taras Shevchenko.  All three were sentenced to 40 hours of compulsory labour, effectively for Ukrainian flags, which one police officer in court suggested were ‘prohibited symbols’.  Kuzmin also lost his job as a school history teacher as a result.

Kuzmin, together with Shukurdzhiyev and others, created the Ukrainian Cultural Centre in Simferopol on May 7, 2015.  It was stressed from the outset that this was a totally apolitical centre, focusing on Ukrainian culture, history and language.   Kuzmin told Novaya Gazeta in February 2017 that there had earlier been a lot more people active in the Centre, with Ukrainians coming to Simferopol from Sevastopol and Yalta.  Many had stopped coming, he explained, since they understood that even for attending lectures on Ukrainian themes and film showings, a person will at very least attract the attention of the FSB.

Shukurdzhiyev was basically forced to leave Crimea for mainland Ukraine in February 2016, after receiving constant summonses to the so-called Centre for Countering Extremism and the FSB, and informal warnings of what to expect if he remained.

In March this year, four other members of the Centre – Kuzmin, Alyona Popova, Halyna Balaban and Mykhailo Batrak – were summoned for question, with the FSB claiming that the interrogation was as witnesses in a criminal prosecution launched against Shukurdzhiyev for supposed ‘extremism’.   The specific charge is that which Russia has used against Crimean Tatar leader Ilmi Umerov, journalist Mykola Semena and others – so-called  "public calls to action aimed at violating Russia’s territorial integrity".

In June 2017, Natalya Kharchenko, a blogger and the mother of two small children was forced to leave Crimea with her husband Ivan Vinohradov or face criminal proceedings over a posted photo with a Ukrainian flag.  Both Kharchenko and Vinohradov were also members of the Ukrainian Cultural Centre.

Arrests, imprisonment and various forms of harassment of Crimean Tatars and other Ukrainians who remain openly true to Ukraine are very clearly aimed at forcing those with a strong civic position to leave Crimea.  There are also increasing reports that Russia is still further compounding its breach of international law by populating the peninsula with Russians, a policy first applied during the Stalinist period, when Russians were brought to Crimea and often occupied the homes of Crimean Tatars and other groups forcibly deported in 1944.