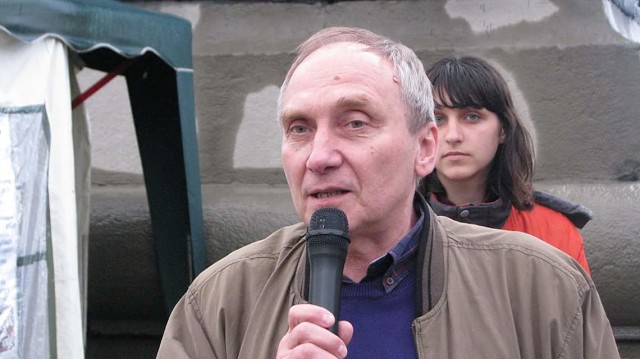 World-renowned Ukrainian academic and advocate for inter-faith dialogue, Ihor Kozlovskyy has been imprisoned in the so-called ‘Donetsk people’s republic’  since January 2016 because he remained in Donetsk to care for his disabled son.  This is hardly a proper reason, but then neither are the absurd charges that the militants came up with after holding the retired university lecturer incommunicado for a month.  The Moscow Patriarchate, whom the militants would heed, has refused to get involved, claiming this to be ‘an internal Ukrainian matter’.

It was Ukraine’s Academy of Sciences who appealed to the head of the Russian Orthodox Church, and aside from compelling humanitarian grounds for interceding on Kozlovskyy’s behalf, there are other reasons for questioning the Moscow Patriarchate’s position.  It is almost certainly no accident that Kozlovskyy was seized around the same time as DPR-orchestrated ‘protests’ against so-called ‘sects’, a term used for just about any religious faith except the Orthodox Church under the Moscow Patriarchate.  The self-proclaimed ‘Donetsk and Luhansk people’s republics’ are currently engaged in new offensives, especially against the Jehovah’s Witnesses, with these closely following repressive measures  applied in Russia.

Kozlovskyy has been denied even telephone contact with his family and the militants have from the outset refused to add his name to the list for exchange.  The reasons for this also seem to vary, but they are claiming that he has somehow become a ‘DPR citizen’.

The brutality is shocking considering the reason why Kozlovskyy remained in Donetsk, despite his pro-Ukrainian views and his commitment to religious dialogue and peace putting him in danger after militants led by people like Russian former military intelligence officer Igor Girkin seized control.  His son Sviatoslav (Slava) has Down Syndrome and is paralyzed from the waist down.  The huge number of Ukrainians displaced by the conflict do not have it easy, and even finding accommodation for a severely disabled young man in a wheelchair would not have been easy.

Having remained in Donetsk, Ihor Kozlovskyy took an active part in the Prayer Marathon during which believers of different faiths gathered in the city centre each day, under a Ukrainian flag to pray for unity and peace.  A number of participants were abducted, attacked or otherwise persecuted during the many months in 2014 before it finally became impossible to continue.

Kozlovsky’s commitment to inter-faith dialogue and academic works in this field have earned him respect and renown in Ukraine and abroad, but were likely also viewed as ‘suspect’ by the militants.   So too was the article that Kozlovskyy was reportedly writing about the impact of the military conflict on religious communities under militant control many of whom have faced persecution and / or been forced to flee their homes.

The ideological grounds for Kozlovskyy’s seizure were clear from the beginning.  In February 2016, Alexander Khodakovsky, then a militant leader, asserted that the highly respected academic might have been involved in what he termed “destabilizing the situation” and had had “multiple contacts with various organizations in Ukraine engaged in destructive activities here”.

The militants turned up at Kozlovskyy’s flat on January 26, 2016 and without any explanation, took him away, together with computers and various documents, including Slava’s passport. Slava was left totally alone in the flat, and because his papers had been taken away, it took the family over six months to be able to get him out to safety.  He continues to clutch hold of his father’s photo and keeps asking when he’s coming home.

The charges – two grenades which Kozlovsky was alleged to have kept on a bookshelf in the home he shared with his totally immobile son- appeared in the story later, and were manifestly absurd.

On May 3, a so-called ‘military tribunal’ not only accepted the nonsensical charge, but also ignored Kozlovskyy’s age and disabled son, and went along with the so-called  military prosecutor in passing the harshest sentence possible -  2 years and 8 months.  The ‘court’ claimed this to be warranted due to the academic being a “particularly unreliable individual” due to his contacts with several organizations banned in ‘DPR’ , like the VO Svoboda Party.  The ‘sentence’ was delivered by a so-called ‘military tribunal’ and was therefore not subject to appeal.

Please help to draw this case to the attention of religious communities and political leaders in your country.  It is the Kremlin and also the Russian Orthodox Church under the Moscow Patriarchate that the militants would listen to, and pressure is therefore needed in that direction.