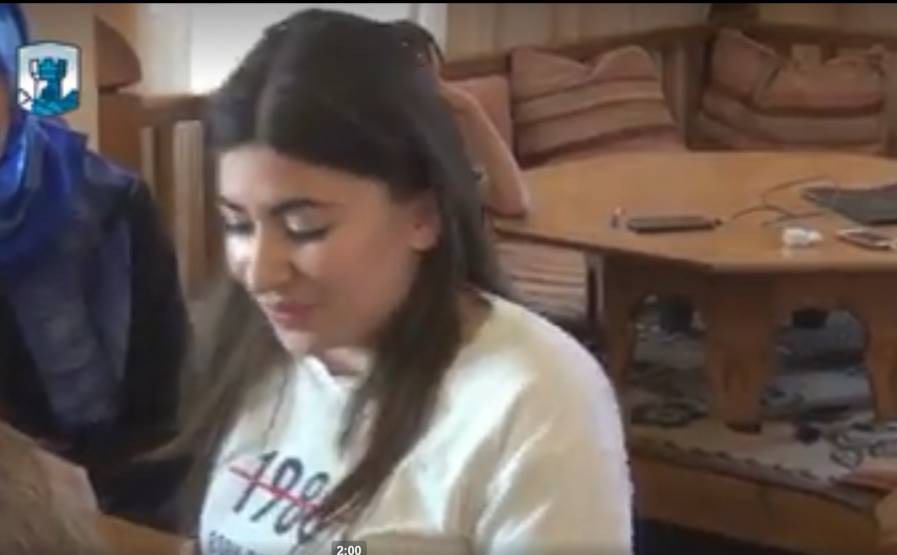 “You have no rights” is what the mother of a young Crimean Tatar woman was told when Russian enforcement officers arrived to search their home.  This, it was claimed, was because the young woman, Zarema Umerova from Bakhchysarai had “behaved badly to the Russian-speaking population”.

The young woman’s supposed criminal offence  lay in a post, or two, on a social network.  She denies having anything to do with the second post, and both the mirth with which her  mother reads out this text and the threats used to force the family to agree to a closed court suggest that this text was a deliberate provocation which would not stand up to scrutiny in an open court.

The text that she fully admits to posting was, in fact, a quotation from Russian President Vladimir Putin, speaking here,  Umerova explains that she simply quoted his words about “Russian soldiers standing behind women and children and wrote that Muslims would never put women and children in front”.

Under Russian occupation, any social network pages are likely to be monitored, and her comment in response to Putin was noticed.  Criminal proceedings were initiated on a charge of supposed ‘creation of an extremist group’ (Article 282 § 1 of Russia’s criminal code).  The family had been terrorized and initially tried to avoid any publicity.  Nariman Dzhelyal had reported back on August 9 that he and other activists of the Crimean Tatar national movement had at least succeeded in providing legal assistance and getting the minimum fine under this article.  The fine is, nonetheless, draconian: 300 thousand roubles, which is far beyond the family’s ability to pay.

Dzhelyal reported the fine a month ago to ask for it to be considered by the Crimean Marathon currently raising money to pay unwarranted fines imposed on Crimean Tatars for solidarity with victims of repression.

Russia has stepped up the use of absurdly high fines as another method of crushing peaceful resistance to repression in occupied Crimea.  In August, for example, 76-year-old Server Karametov was both imprisoned for 10 days and fined 10 thousand roubles for a totally peaceful picket in defence of imprisoned Crimean Tatar leader Akhtem Chiygoz.  A few days later, another retired Crimean Tatar Yarikul Davlatov was fined 10 thousand roubles for a legal solitary picket in defence of Server Karametov and other victims of repression.

Those fines are already a major burden, while 300 thousand is impossibly high.

The fine and the measures against the young woman were also very clearly unwarranted.  She and her mother recounted the events at a meeting of the civic initiative Crimean Solidarity.

The officers who came to search their home found nothing illegal, but took away computers, etc.  They held Umerova in custody for two days, trying to get her to ‘collaborate’, threatening her with 10 days’ imprisonment if she refused.

She did not give in.

They also put pressure on both her and her family to agree to a closed court hearing, and to sign whatever was demanded.   She was told, for example, to “think about her family”, a fairly clear threat.  She agreed, meaning that the entire ‘judicial spectacle’ was enacted without any witnesses.  It was thanks to the lawyer that the fine was not an even more impossible 500 thousand.

The family had also been subjected to a search, then another visit, and a summons for interrogation.  Umerova’s mother says that the questions were aimed at denigrating Crimean Tatars, grilling them on how they viewed Crimean Tatar leaders, etc.

She told the meeting:  “Today, tomorrow, the day after, they could burst into anybody’s home like they did to us.  They’re hitting us at a particularly vulnerable – financial – point.  In my case the fine is so big and, working in the public sector, I simply couldn’t pay it.  I want to thank civic activists who helped with a lawyer, gave moral support and helped to cope financially. I’d like to say to all of you to not be afraid.  We will nonetheless uphold our rights, we will win!”

Without the Crimean Marathon, Crimean solidarity in general, she would be totally unable to pay the fine.

It is that solidarity which annoys the Russian occupation regime and which it is trying to break, including through obviously unwarranted criminal and administrative proceedings and extortionate fines.