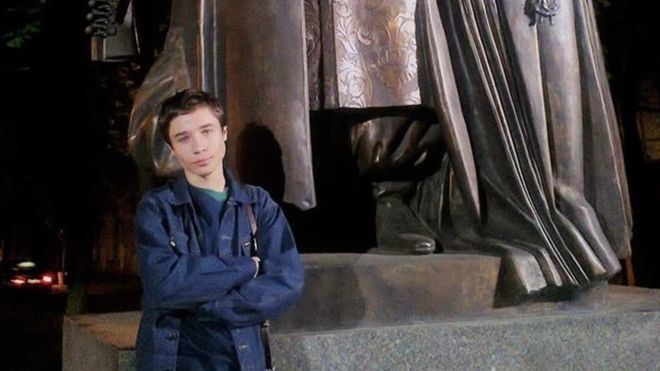 13 days after 19-year-old Ukrainian Pavlo Hryb vanished after entering Belarus, Russia’s FSB [Security Service] has admitted that he is in Russian custody in a Krasnodar SIZO [remand prison].  There are serious questions to be asked regarding the Belarusian authorities’ apparent complicity in this abduction as well as grave concern about Russia’s motives for holding the young man incommunicado for so long.

Vasyl Kyrylych, head of the Ukrainian Foreign Ministry’s Consular Service, reported on August 7 that the FSB for the Krasnodar Region had informed of Hryb’s ‘detention’.  It claimed that he had been arrested on August 25 on charges of ‘terrorism’.

The date given is almost certainly a cover for both the FSB and Belarusian authorities, since Hryb disappeared soon after arriving in Gomel, Belarus a day earlier, on August 24.  There can be no question that the young man, who has openly criticized Russia’s aggression against Ukraine, voluntarily crossed into Russia, nor was there any indication when he crossed the border into Belarus that he was on any ‘wanted list’.

Ihor Hryb sounded the alarm almost immediately after himself travelling to Belarus to find his son, and it was suggested from then on that Pavlo might be held in the Krasnodar SIZO.  Even were there any conceivable grounds for accusing the young man of ‘terrorism’ in a country he had never set foot in, the delay in admitting what could not be concealed, suggests that the reason could be to put pressure on Pavlo.

This is particularly criminal since the young man has extremely serious health issues, and lack of the medication he needs to take on a daily basis and of proper medical care could place his life in danger.

The 19-year-old had corresponded with a young woman he knew only from conversations on the social network VKontakte and Skype.  He was supposed to have been going to Gomel at her request and to return the same day.

Ihor Hryb is a former border guard who is now involved in the Chaplain Service for Ukraine’s Armed Forces.  He understood enough from his trip to Belarus in search of Pavlo that the lad had probably been abducted by the FSB.  While talking to Belarusian border guards, he had seen on one of the men’s tablets his son’s name as ‘wanted’ in Krasnodar on terrorism charges, and then found that the men tried to deny that Pavlo had entered Belarus.  This had, in fact, been confirmed by the coach driver, and Belarus soon admitted that he had crossed into their country, but claimed to have no knowledge of his later movements.

This is quite simply impossible.  Russia and Belarus share a common database and it was an entry on this that Ihor Hryb saw while talking to the border guards.  If the latter had genuinely believed that Pavlo was wanted on suspicion of a crime, there is procedure to be followed, and he should have been detained in Belarus.  Instead, at very least, Belarus turned a blind eye as the lad was taken against his will into Russia.

Both Russia and Belarus remained silent as all of the above was made public, together with admission by the 17-year-old girl with whom Hryb had been corresponding. She told a Ukrainian TV station that she had been forced by the FSB to get Pavlo Hryb to Belarus, and that the FSB are threatening her also with the same ‘terrorism’ charges.

The worst fear must be that the delay was in order to produce the same type of ‘confession’ which the FSB or Russia’s Investigative Committee have tortured out of other Ukrainians it held incommunicado.

Serhiy Lytvynov.  In August 2014 he sought treatment for a tooth infection in the nearest Russian hospital since the hospitals around his home in a Luhansk oblast village near the border had been seized by the Russia-backed militants  He was tortured into signing confessions to being a Ukrainian volunteer soldier and to having committed a whole range of crimes.  They would undoubtedly have been war crimes, as the media trumpeted, had the women and young girls he was supposed to have raped and murdered ever actually existed.  Not only the ‘victims’, but even their addresses were proven to be fictitious (more details here)

34-year-old Valentyn Vyhivsky who was seized at Simferopol railway station on 17 September 2014 by armed paramilitaries who handed him to the FSB.  He was taken against his will to Russia where he was held incommunicado for eight months, without a proper lawyer or contact either with the Ukrainian consul or his family, before being sentenced to some kind of mystery ‘spying’ (see: Russia’s Ukrainian Hostage abducted, tortured & now held in solitary confinement)

43-year-old Stanislav Klykh who was seized in the Oryol oblast of Russia in August 2014.  The Kyiv historian had gone there, he thought, to see a woman he had met the previous year in Crimea.  It is likely that this was a trap since the woman has not been heard from since.  Klykh himself was seized by the FSB and held totally incommunicado for ten months.  During that time, he was tortured and given psychotropic drugs to extract ‘confessions’.  Both he and nationalist politician Mykola Karpyuk (held incommunicado for 18 months) ‘confessed’ to entirely fictitious crimes supposedly committed in 1994/95 in Chechnya together with a number of prominent Ukrainian politicians.

There are strong grounds for believing that 61-year-old pensioner Oleksiy Sizonovych was, like Nadiya Savchenko, seized by Kremlin -backed militants in the Luhansk oblast and taken against his will to Russia.  Held incommunicado, and almost certainly without a proper lawyer, he ‘confessed’ to a thoroughly implausible ‘sabotage’ plan and has been sentenced to 12 years (details here)

Almost the only prisoner effectively abducted who has since been released has been Savchenko.  In other cases, Russia carries through such ‘trials’ or comes up with new charges.

Pavlo Hryb has had disability status since childhood.  On compelling health grounds, it is imperative that pressure is put on Russia now to release the young man it has kidnapped