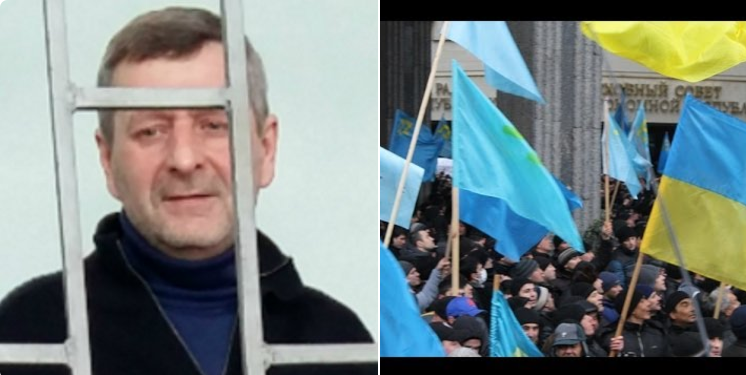 89-year-old Lutfi Bekirov is one of the many Crimean Tatars who have been warned that they will be arrested for gathering outside the Russian-controlled High Court in occupied Crimea on September 11 as sentence is passed on Crimean Tatar leader and political prisoner Akhtem Chiygoz.  The veteran of the Crimean Tatar national movement points out that there is a very long tradition of showing support for victims of political repression, and he has no intention of breaking with that tradition.  This is especially important now, since the verdict against Chiygoz is in fact “a verdict against the Crimean Tatar people”.

Nariman Dzhelyal, a leading figure in the Crimean Tatar self-governing structure, reported on September 8 that he had been informed by an official of Russia’s so-called centre for countering extremism that any gathering outside the High Court on September 11 will be treated as an ‘unauthorized mass event’.  In a video address, Dzhelyal said that all those who come to the court must be prepared for possible detention and subsequent fines, or even brief jail sentences on administrative charges.  He warns them to expect various forms of provocation and to remain calm if detained.  “Do not forget, Akhtem Chiygoz needs our support”.

Attention and support are also urgently needed from the international community, as well as a clear message to all those puppet judges, prosecutors and investigators implicated in this case that they should expect to face EU and US sanctions.

Chiygoz has been imprisoned since January 29, 2015 and charged with organizing a demonstration on February 26, 2014 on Ukrainian territory and under Ukrainian law.  Not only does Russia therefore have no jurisdiction, but there are also no grounds for the charges against Chiygoz.  There was no ‘mass riot’ that day, and the demonstration was not organized by Chiygoz.  In a record 150 surreal court hearings, not one scrap of evidence was provided of any unlawful behaviour by Akhtem Chiygoz.  On the contrary, in the video footage he is repeatedly seen calming people, seeking to prevent conflict.

On Feb 26, 2014, Crimean Tatars and other Ukrainians gathered to prevent an attempt to force through an illegal change in Crimea’s status.  There were around 10 thousand from the pro-Ukrainian side, and several thousand pro-Russian demonstrators.

Only Crimean Tatars have been targeted, although there is ample video footage showing provocation and violence by pro-Russian protesters, and the two deaths that day were in fact on their side of the demonstration.

With absolutely nothing to substantiate the charges, the Russian-controlled investigators produced a whole barrage of dubious ‘witnesses’ for its imitation of a court trial.

This led to some rather incriminating moments, like when the Sevastopol ‘centre for countering extremism’ inadvertently provided Ukraine with important information about Russia’s invasion for the International Criminal Court in the Hague.  Among those present at the pro-Russian part of the demonstration were the so-called ‘private military company’ Black Sea and a paramilitary Cossack organization from Sevastopol

Polozov notes that the ‘investigator’ was aware back in March that members of both a military and a paramilitary organization had been at a peaceful demonstration, yet never made any attempt to probe their behaviour.

There is considerable evidence that Russia was planning to use certain pro-Russian politicians in Crimea to bring about a supposed change in Crimean status without the overt use of Russian soldiers.  It failed thanks to the Mejlis and around 10 thousand Crimean Tatars and other Ukrainians who gathered under both Ukrainian and Crimean Tatar flags.  There was no mass riot that day, and these ‘trials’ bear all the hallmarks of politically-motivated persecution, probably motivated by revenge for having foiled the Kremlin’s plan for seizing Crimea without soldiers and the resulting international condemnation.

The de facto prosecutor in Russian-occupied Crimea, Anastasia Supryaga has demanded an eight-year sentence for Chiygoz, and the defence has long warned that this is a politically motivated ‘trial’ with the only imponderable being the length of the sentence passed on a man who committed no crime.

Russia has even prevented Chiygoz from being at his own pseudo-trial since July 2016.  It only allowed him to visit his dying mother for ten minutes after international pressure, and prevented him from attending her funeral.

Efforts to terrorize Crimean Tatars into not showing solidarity with Chiygoz and other victims of Russia’s political persecution have thus far failed.  There is, therefore, a second unknown – namely, how many other Crimean Tatars will be detained, fined or even imprisoned on September 11, as was frail and elderly Server Karametov.  He was imprisoned for ten days for a single-person picket in defence of Akhtem Chiygoz under a placard reading: “Putin, our children are not terrorists”.