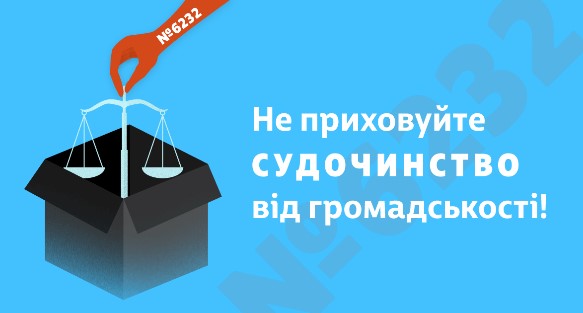 The changes, proposed by President Poroshenko, would be a serious step backwards away from the greater court transparency achieved since Maidan

Civic activists, NGOs and the media warn that planned ‘reform’ of the judiciary could seriously reduce the level of transparency of court proceedings in Ukraine.  A large number of major NGOs has issued an appeal in which they call on MPs to reject legislation that would negate vital progress made since Euromaidan and the Revolution of Dignity.

The justice system under former President Viktor Yanukovych suffered major degradation and judicial reform was certainly one of the areas seen as critical for post-Maidan Ukraine.  The appeal stresses that progress has been made since Maidan on making the courts more transparent and ensuring dialogue with the media and public.  The revised Law on the Judicial System and Status of Judges, for example, establishes the right to video or photograph open court hearings without the need for any special permission.

How major an achievement this is can be seen by following ‘court proceedings’ in Russian-occupied Crimea.  There are a number of ‘judges’ who are unfortunately willing to pass the repressive rulings demanded by the occupation regime.  Many of the court hearings, for example, those on extending the extension of 15 Crimean Muslims indefinitely imprisoned on fabricated charges, are now held behind closed doors.  Where the hearings are open, such as those over the extraordinary charges brought against 76-year-old Server Karametov for a peaceful picket in defence of imprisoned Crimean Tatar leader Akhtem Chiygoz, the ‘judges’ still do everything to ensure that they are not photographed.  Marina Vladimirovna Kolotsei had reason for hiding her face when she jailed the frail and ill pensioner for ten days for supposedly ‘resisting the police’.

Now openness in mainland Ukraine is also under threat.   In June 2017 President Petro Poroshenko tabled a draft bill on judicial reform.  While the latter has a number of progressive provisions, it would, if adopted, reduce the level of openness of court hearings and would obstruct civic monitoring of court proceedings.  The bill is already at second-reading stage.

If passed, it would mean that the court could PROHIBIT the photographing, videoing or broadcast of open court hearings if – in the court’s opinion – they “obstruct the course of the court proceedings”.  This gives unlimited discretionary powers to judges to decide what is an ‘obstruction’, and would seriously hinder monitoring of court hearings, often those of public importance.

The court will be allowed to refuse entry on the grounds that ‘there are no free seats’.  Such lack of seats is very easy to achieve – a judge need only call his or her office a ‘courtroom’ and the deed is done.  The provision would also likely lead to hearings in high-profile cases being scheduled for small courtrooms to enable reduction in the number of people allowed to attend.

The bill would also allow the court to not make public court rulings passed after closed court hearings. This, the authors of the appeal point out, is in violation of Article 6 of the European Convention on Human Rights which clearly states that, while hearings may be held behind closed doors under certain circumstances, the court’s rulings should be “pronounced publicly”.

A party to proceedings would also be prohibited, on threat of liability, from any photographing or recording during closed meetings with a judge to regulate disputes.  The authors believe that this would enable judges to hold such meetings with each party separately and make unwarranted demands without any fear of liability, since such action could not be proven.

All of the above, the authors stress, would be a major step backwards for Ukraine’s judicial reform.

The appeal to MPs to reject the bill is signed by, among others, the Centre for Political and Legal Reform;  the Kharkiv Human Rights Protection Group, the Association of Ukrainian Human Rights Monitors on Law Information and Institute for Mass Information (a full list can be found here)