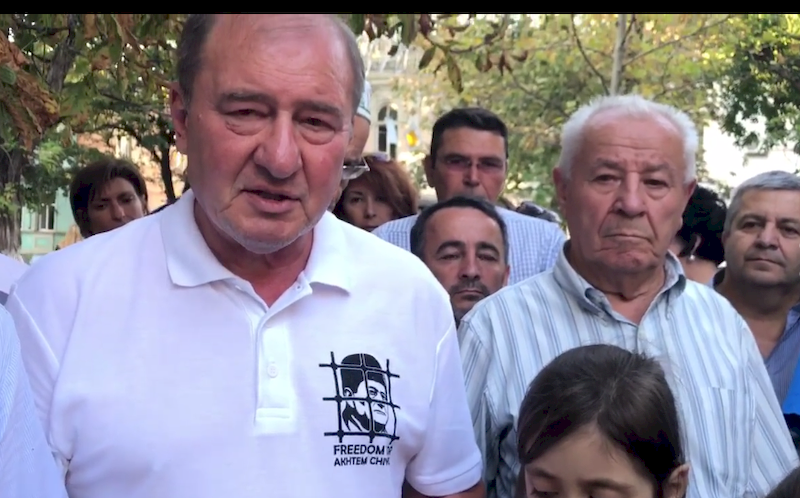 Russia’s FSB rejected at least one translation of the interview given by Crimean Tatar leader Ilmi Umerov because the translator neither found nor invented the supposed ‘public calls to violate Russian territorial integrity” which Russia wanted to charge Umerov with. It is unknown how many translators were approached, before the FSB found a translation shoddy enough and a ‘linguist’ willing to add bits to fit the charges and conceivably imprison the 60-year-old for five years.

Umerov was initially detained on May 12, 2016 and charged in connection with an interview given to Crimean Tatar TV ATR  on March 19 that year.  The indictment asserted that he had, “with intent to carry out activities aimed at violating the territorial integrity of the Russian Federation, … deliberately and publicly called on an unlimited number of people to carry out actions aimed at returning the Republic of Crimea under Ukraine’s jurisdiction”.

Since this is precisely what the United Nations General Assembly, the OSCE’s Parliamentary Assembly, the EU and countless other international structures and leaders have called for, the mere fact that criminal proceedings had been initiated was staggering.

The charges are even more astounding since Umerov did not actually utter the words in which the FSB ‘expert’ spotted the so-called ‘public calls’.

More evidence that this was systematic falsification was presented at the hearing on September 13.

The defence asked to have Gulnara Chantalova questioned as a witness. She is a specialist in the Crimean Tatar language working for a university in Simferopol.  In April 2016 (before the criminal proceedings were initiated), the FSB approached the Dean of her university who in turn approached her faculty.  The FSB asked for a translation of a video transcript of the interview given by Umerov.  A copy of that FSB request was provided to the court, and has been added to the case.

Chantalova completed the translation and passed it to the university office which sent it on.  Nothing more was ever heard about this translation.  There was no mention of it in the file presented by the prosecutor to the court.

Small wonder if Umerov is right in his succinct explanation: “The investigators weren’t satisfied with the translation she did because it could be correct”.

The translation would assuredly not have suited the FSB since Chantalova explains that she could not see anything unlawful in the transcript.  “There were no ‘calls to act’, in fact, quite the contrary. He rather calmed people, saying that they shouldn’t come out on the street on May 18 (the anniversary of the Deportation), it was better to remain at home, read prayers and think of those who perished during the Deportation”.

She read out her literal translation of the part of the interview which figures in the indictment.  There is no sign of the word ‘must’ which is critical to the prosecution’s claims.

The defence told the court that the lack of any mention of this translation in the file, and the failure to add the letter commissioning it and information as to why it was not used, are still further infringements and evidence of falsification.

There is also no proof that this was the only translation that the FSB found too accurate.

It turned instead to a ‘translator’ identified only as Saledinov and to a ‘linguist’ working for the FSB – Olga Nikolaevna Ivanova.

Since the translation is faulty, it was clear that the defence would wish to question Saledinov as a witness.  It was probably to prevent this that the prosecutor Yelena Artemenko insisted on Saledinov being present during the hearings, thus precluding his being called.  Judge  Andrei Sergeevich Kulishov, as almost always, went along with the prosecution.

Worth recalling that the investigator in this case – Igor Skripka – illegally demanded that Umerov’s lawyer Nikolai Polozov be questioned as a ‘witness’, thus forcing him off the defence team.

At an earlier hearing, Saledinov was asked to translate in court Umerov’s words from the video recording. The translation differed radically from that provided.

It is precisely that faulty translation that Russia’s FSB is trying to use to convict Umerov of ‘separatism’ and the so-called public calls to violate Russia’s territorial integrity.

Where Umerov was speaking about international sanctions and how these should be strengthened, Saledinov added the modal “it’s necessary to”, thus claiming falsely that Umerov had said that Russia must be forced to leave them.

When challenged in court to say whether Umerov had used the modal, Saledinov claimed falsely that you can put it in or not.

Ivanova’s ‘expert assessments’ are used in two trials underway at the moment: Umerov’s and that of journalist Mykola Semena.  During a hearing over charges that the 67-year-old journalist also made such ‘public calls’, Ivanova claimed that the use of a modal verb is sufficient to call something a ‘public call to violate Russia’s territorial integrity”.

Her assessment has received an annihilating assessment from the authoritative Moscow Guild of Linguists, presented to the court on August 16.  The report notes that Ivanova’s assessment from August 22, 2016 had not reflected part of the original data, with this placing the objectivity of the assessment in doubt.

Ilmi Umerov has never concealed his rejection of the pseudo-referendum which Russia has tried to use to justify its annexation and his unwavering position that Crimea is part of Ukraine, and he reiterated this during questioning on September 13.  His view that he is on trial for this position is shared far beyond Ukraine and there have been repeated calls from all international bodies and democratic states for these surreal charges to be dropped. Unfortunately, the 8-year sentence against Crimean Tatar leader Akhtem Chiygoz passed on September 11 demonstrates the degree to which Russia is willing to use lawless methods against those who oppose its annexation of Crimea. While FSB shoddiness should not be underestimated, it is not at all impossible that the scale of falsification is quite deliberate, sending a chilling message that the FSB can do anything it likes against those who refuse to be cowered into silence.