Jailed historian of Stalin’s Terror declared a political prisoner in Putin’s RussiaRussia puts Historian of the Soviet Terror on TrialRussian historian of the Terror jailed after Soviet-style denunciation faces new chargesRussian historian of Soviet terror arrested on chillingly cynical chargesRussian activists jailed for crucifix protest at monument to notorious secret police chiefPortraits of Stalin hang in police offices in Putin’s RussiaMonument to Joseph Stalin unveiled in militant-controlled LuhanskRussian-Occupied Crimea: Memorial Plaque and Glorification of StalinDramatic increase in number of Russians who justify StalinStalin Museum: Putin’s Russia Immortalizes Bloody DictatorAnger and Protest over Stalin Monument in YaltaPortrait of Stalin appears in Russian-occupied CrimeaStalingrad as latest step in re-glorification of tyrantNeo-Nazis in Moscow’s ServicePro-Russian separatists start their own anti-Semitic TV channelPro-Russian, anti-Roma, anti-Semitic and hunting out Ukrainian speakersThe Donetsk anti-Semitic leaflets – what should not be overlookedEast Ukraine crisis and the ’fascist’ matrixRussia continues its false narrative as defender of oppressed minorities in UkraineRussian propaganda claims Jewish organizations supporting Maidan are bringing on "second Holocaust"
• Topics / News from the CIS countries

Russia honours founders of the Soviet Terror, jails historian who uncovered their victims 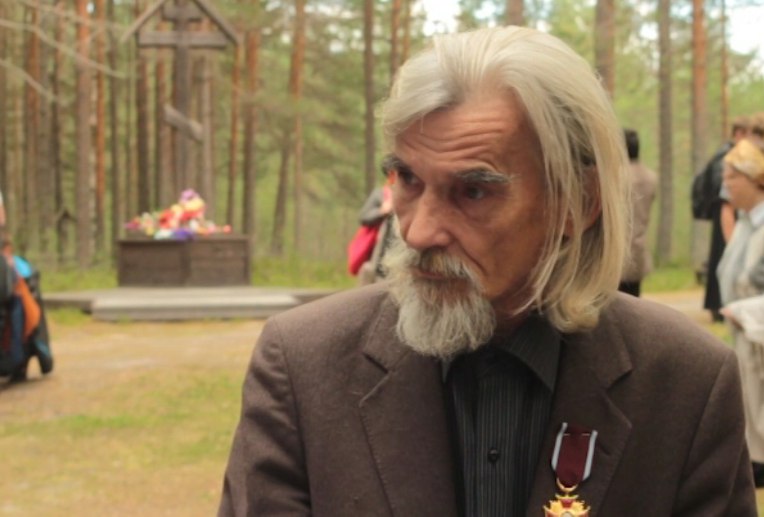 A museum was ceremoniously opened in Russia recently to Felix Dzherzhinsky, the founder of the notorious Soviet secret police, with the event attended by MPs and members of the FSB, Russia’s modern-day security service.  The week also saw an important development in the latest closed court hearing of the widely condemned trial of Yury Dmitriev, a 61-year-old historian who has devoted most of his life to uncovering the mass graves of the victims of the Soviet secret police and identifying the perpetrators.

The shift towards rehabilitating the perpetrators of the Soviet Terror and muffling information about the victims began within a few years of ex-KGB officer Vladimir Putin’s rise to power.  The results are evident in the record number of Russians who have a positive attitude to the murderous Soviet dictator Joseph Stalin and the fact that Stalin’s portrait is found openly hanging in FSB offices.

A vital museum on the history of political repression, located at one of the worst of the political labour camps Perm-36 was forced to close.  It was later re-opened as a shell of itself, which focuses on the architectural details of the place and avoids such sensitive subjects as the Gulag and political prisoners.

There have been constant attacks and attempts to muffle the Memorial Society, which has helped countless Russians, Ukrainians and other peoples of the former Soviet Union to learn the fate of relatives seized during the Terror.  The circumstances around the imprisonment and trial of Yury Dmitriev suggest that the attack on him is, at least in part, an attempt to discredit Memorial.

Dmitriev, a historian and the head of the Karelia branch of Memorial, is very well-known far beyond Russia for his work in uncovering the mass graves of victims of the Terror at the Sandarmokh Clearing (Karelia).  It is thanks to him and his Memorial colleagues that we know the fate of 1,111 prisoners of the Solovky Labour Camp, including 290 prominent Ukrainian writers, artists, scientists and others, who were executed ‘by quota’ between 27 October and 4 November 1937.

Dmitriev, and Memorial in general, have concentrated recently on material aimed at identifying not only the victims, but also the perpetrators.  Dmitriev’s daughter, Kateryna Klodt, is not alone in believing that the charges brought against her father are directly linked with his work, and because “the children of those who once executed or imprisoned people, now hold office”.

Dmitriev is ostensibly on trial for something else altogether.  He was arrested in December 2016 and charged with ‘preparing pornography involving a minor’ (Article 242.2 of Russia’s criminal code) and ‘depraved actions with respect to a child under the age of 11’ (Article 135).  Much later they added the charge of illegal possession of a weapon over part of a rifle barrel, which Dmitriev once found among rubbish and took so that kids didn’t pick it up and try to do something with it.

The first two charges are based on a folder filed on his computer and containing 49 photos of his foster-daughter Natasha.  She had been thin and very weak when they took her from the children’s home at the age of three, and the authorities had themselves advised him to monitor her development. Each of the photos, taken between 2008 and 2015 recorded her weight and height.   Dmitriev has said that they were essentially a medical journal, which he stopped keeping in 2015, when Natasha was 10 as there were no longer any concerns about her physical wellbeing.

The photos showed her naked, which made it easy to see whether she seemed too thin, whether ribs were protruding, etc.  They also ensured that the authorities saw that she was well-looked after and that there were no suspicious bruises.

The childcare authorities were constantly visiting and never once indicated any concern over Dmitriev’s treatment of his daughter.

The criminal proceedings supposedly originated from a denunciation with the enforcement officers using a ploy to get Dmitriev and his partner out of the house for a few hours.  Dmitriev had clearly been aware that something was going on, and probably suspected that they would try to plant something in the house.

It obviously never occurred to him that the 49 photographs, with weight and height details, would be used.

This is hardly surprising when the ‘investigators’ were forced to come up with an ‘expert assessment’ written by a mathematician, a teacher and an art historian to find ‘pornography’ in nine of the photos.

On June 22, Dr Lev Shcheglov, the President of the National Institute of Sexology, was questioned at the trial.  He was categorical that none of the photographs in the Dmitriev file are pornographic.  The same conclusion was reached by other experts called by the defence.

At the September 15 hearing, judge Marina Nosova agreed to another expert assessment, however only of the nine photographs which a mathematician saw as ‘pornographic’.  It seems that even the prosecutor had understood that another assessment was required, but insisted that this only look at the nine photos.  The defence objected, and believes that pulling individual photos out is misleading and aimed at pushing the position that Dmitriev could not have had medical grounds for the photos.

It was in later Soviet times that the FSB often turned to ‘criminal’ charges against dissidents. In this case, the prosecution has chosen charges overtly aimed at discrediting the historian, while being able to use Natasha’s age as the pretext for holding all court hearings behind closed doors.

Scepticism is inevitable and not only because the ten-year-old child who saw Dmitriev, his daughter and grandchildren as her family and had never once spoken of any improper behaviour, has been prevented from having any contact with them and sent away, to live with a grandmother she had never met.

Such apparent concern for the child’s privacy is also hard to reconcile with the scurrilous  15-minute program shown on the government-controlled Rossiya-24 TV channel on January 10, 2017.  Most of the film was an attack on Memorial, with the 5 minutes about Dmitriev and the photos clearly aimed at spreading dirt and convincing the audience of his guilt. The timing of the film (at the end of the New Year – Christmas break) and the fact that there appear to be photos of Natasha suggest that it was made in close collaboration with the FSB and / or Investigative Committee.

A very large number of prominent historians, political analysts, writers and others have spoken out in defence of Yury Dmitriev.  On July 25, the Memorial Human Rights Centre declared him a political prisoner and demanded his release and an end to this fatally flawed and political trial.

A Russian-language petition has been endorsed by over 33 thousand people.